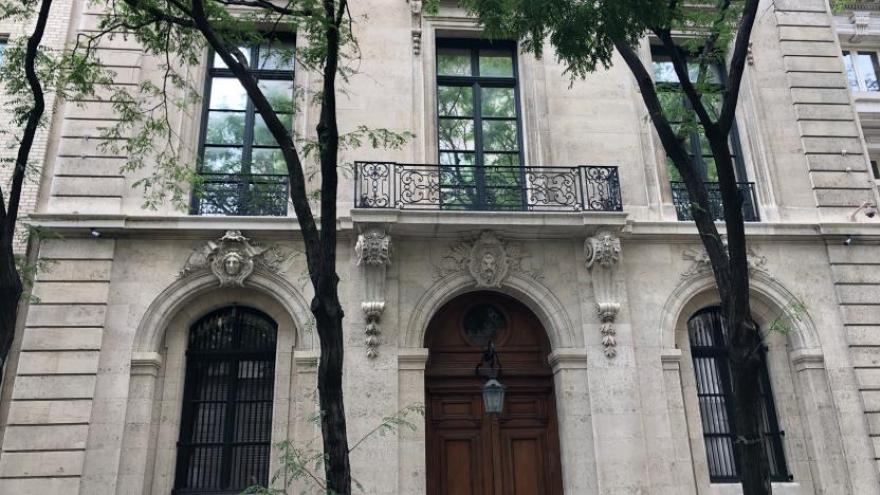 The seven-story, 10-bedroom Upper East Side mansion of Jeffrey Epstein is described as the largest single-family home in New York City by a real estate agency.

(CNN) -- Two homes owned by Jeffrey Epstein and cited in court documents as some of the locations where Epstein was accused of sexually abusing young women are now for sale for a combined total of roughly $110 million, according to the properties' listing agents.

Epstein's Upper East Side mansion is listed at $88 million, according to a listing verified by Adam Modlin of the Modlin Group. The listing describes the sale as a "once in a life-time opportunity to own the largest single-family home in New York City."

A source familiar with the listing told CNN that the property would be the biggest townhouse sale in New York City history if it sells at its $88 million listing price, surpassing a $77.1 million sale last year.

The seven-story home on East 71st Street has 40 total rooms, including 10 bedrooms and 15 bathrooms. It has an unobstructed view of Central Park and is across the street from the Frick Collection museum, according to the listing.

"This historic landmark could easily present itself as a palatial consulate, embassy, foundation, or a museum to once again house some of the world's greatest works of art," according to the listing.

Described as a French neoclassical building, the home has more than 28,000 square feet, according to the listing, which lists some of the property's amenities as "15-foot-tall oak entry doors, imported French-limestone meticulously decorated with carvings, sculpture figures and ornamental iron works."

Epstein's waterfront property in Palm Beach, Florida, is priced at $21.9 million, according to a listing verified by Kerry Warwick of the Corcoran Group.

The 14,000-square-foot home has six bedrooms and seven-and-a-half bathrooms with full views of the Intracoastal Waterway, according to the listing. It features a pool and pool house, a staff house and a three-car garage.

Multiple women alleged that Epstein sexually abused them at his properties in the US, including in New York, Palm Beach, a ranch in New Mexico and the island he owned in the US Virgin Islands.

In June of this year, a victims' compensation fund was created as a part of Epstein's estate to disburse funds to the women Epstein allegedly abused, many of whom were underage at the time.

On Thursday, a federal judge ruled to publicly release documents that have been kept under seal in a case involving Ghislaine Maxwell, Epstein's one-time girlfriend and alleged accomplice.

US District Judge Loretta Preska verbally unsealed the documents in a ruling held via teleconference. She is giving Maxwell's legal team a week to pursue an appeal to her decision but ordered the court to have the documents ready to be posted "within a week."

The documents are connected to a 2015 defamation case brought by Virginia Roberts Giuffre, who claimed Epstein sexually abused her while she was a minor and that Maxwell aided in the abuse. The case was settled in 2017.

The 58-year-old Maxwell was arrested earlier this month and charged by federal prosecutors in New York for her alleged role in recruiting, grooming and sexually abusing underage girls as young as 14 as part of a yearslong criminal enterprise.

Maxwell pleaded not guilty to six charges by New York federal prosecutors that she helped recruit, groom and ultimately sexually abuse minors as young as 14.

Before her arrest, Maxwell was living on a 156-acre New Hampshire estate purchased for $1.07 million in cash in December 2019 "through a carefully anonymized LLC," according to court papers and the realty company.