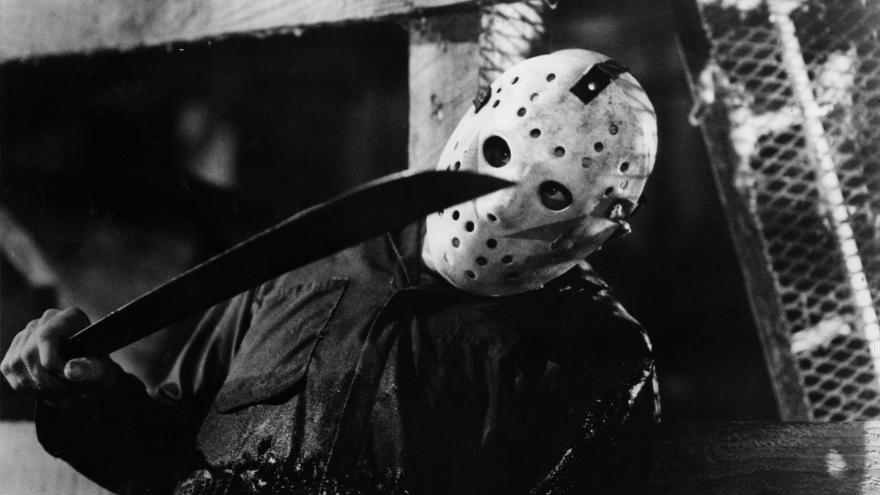 (CNN) -- It wasn't a shock when LeBron James showed up to a Lakers game on Halloween 2018 dressed as Jason Voorhees from the "Friday the 13th" horror films. James had previously called the series "one of my favorites" and posted an Instagram photo of himself dressed in Jason's chosen head gear, a hockey mask.

But James was more than a fan. Days before his costume caught attention, it had been reported that James was interested in bringing the horror icon back to the big screen through his production company, SpringHill.

A reboot never happened. As King James was conquering the court, Jason Voorhees was stuck in one, the subject of a legal battle that has left the horror franchise in limbo.

"My feeling is there's a lot of bad blood" between both sides, said Larry Zerner, an entertainment lawyer in Los Angeles. He uses Twitter to update fans on the latest in the dispute between the screenwriter and the original producer, but he's more than just an observer.

Before he became a lawyer, Zerner was a victim of Jason Voorhees.

For half a decade, "Friday the 13th" has been stuck in a copyright dispute over who owns the original script, with the result, in part, affecting who can use that iconic hockey mask going forward.

In 1982's "Friday the 13th Part III," he plays a prankster named Shelly who, along with his friends, are attacked by Jason in cabins on Crystal Lake. When Zerner's character is killed, Jason takes ownership of a hockey mask that Shelly had used to scare one of his friends. That accessory would go on to define the killer's film legacy and play a key part in the case Zerner is now following.

"I love that my two passions intersect, copyright law and 'Friday the 13th'," Zerner said. "People love Jason; they want to see more."

But the masked killer has been off screen since the release of director Marcus Nispel's "Friday the 13th" in 2009.

On opposing sides of the conflict are "Friday the 13th's" producer and director of the 1980 film Sean S. Cunningham, who also represents a group of investors, and Victor Miller, the first film's screenwriter who has fought for control of his script after the copyright expired.

A court sided with Miller, but in interviews with CNN, Cunningham and Miller's attorney reveal why Jason may not have hacked his way out of court just yet.

"Both sides are really dug into foxholes," Cunningham said. "They're not going to throw any grenades, but I don't think anyone is going to call for peace talks."

Deconstructing who currently owns Jason Voorhees offers a telling window into the copyright law affecting many beloved movie characters and why a court ruling that ended the dispute hasn't exactly clarified Jason's future.

After an appeals court upheld a lower court ruling in September, Miller, the screenwriter, was awarded the copyright for the script and characters associated with the original "Friday the 13th" film.

When Congress lengthened the term for copyrights in 1976, it threw a bone to creators of big-name projects by giving them an avenue to wrestle control of intellectual property away from producers and studios.

"It's designed to give some of the heirs a bite of the apple to share in that extended term," Aaron Moss, an entertainment lawyer who writes the blog Copyright Lately, told CNN.

But only creators hired as independent contractors were protected, not full-time employees of a company. The court concluded that Miller completed the "Friday the 13th" script for Cunningham as a contract worker.

"Now we can license a remake, prequel or even sequel motion pictures... provided such films do not use any additional copyrightable elements" said Marc Toberoff, a Malibu copyright attorney who represents Miller.

That's where it gets complicated.

Miller may control the script and characters from the original movie, but not the title "Friday the 13th," nor the content from sequels which includes the adult Jason and the iconic hockey mask that has defined him since Part III. (Jason's mother was the killer in Miller's original film).

Toberoff, who also secured rights to horror icon Freddy Kreuger and "A Nightmare on Elm Street" for the estate of Wes Craven, appears ready to walk a fine line as he pushes for a future project.

"Miller now owns the copyright to his screenplay, including sequel rights, but Jason can't be portrayed as any older than in the first movie? Makes no sense," Toberoff said. "Jason was very much a presence in Miller's film. In fact, Mrs. Voorhees channeled Jason. And, of course, the first was all teed up for sequels."

He is referring to a final scene where a young Jason leaps from the lake to attack the heroine.

"Then comes the question of the mask," Toberoff adds. "Do you do a new mask, like they often did before? Do you even need the mask?"

Cunningham says he is prepared to fight if Miller tries to make a "Friday the 13th" with an adult version of the Jason character at the center.

"And if it was an adult Jason without a hockey mask, I can't imagine they would be very successful," he added.

A battle over Jason's age and appearance could be moot because of a key limitation of the U.S. copyright law: It only applies to rights within the United States, not foreign markets, which are coveted by Hollywood distributors. Cunningham says those rights still rest with him and the original investors.

"Miller has to convince a studio to make this thing that can only be distributed in the U.S.," said Zerner. "We can have this theoretical argument that you can do a movie that doesn't infringe on the rights of anyone else, but is anyone seriously going to do that without worldwide rights? I doubt it."

But Toberoff claims this case is different because of the unusual nature of Miller's 1979 agreement with Cunningham, which he says will hold up in court to give Miller a partial stake in worldwide rights, in addition to full U.S. rights he won last year.

"We can license television series, exploring Crystal Lake and how Jason became who he is -- think 'Twin Peaks' or 'Bates Motel,'" Toberoff said.

The "Friday the 13th" dispute may be messy, but it's not unique. Copyright fights are on the horizon for many well-known characters.

"Within the next couple years a number of iconic Hollywood movies could wind up in court," Moss said. "Films like 'Robocop,' 'Beetlejuice' and 'Ace Ventura.'"

Fox already settled a case over the rights to Arnold Schwarzenegger's 1987 film "Predator," Moss said, adding that Disney is currently in litigation over five Marvel characters including Spider-Man, Iron Man and Black Widow. But Moss says fans shouldn't worry that their favorite Avengers are at risk of being kept off screen.

"Because the current copyright holder (Disney, in the Avengers' case) is usually the one in the best position to produce and distribute a film worldwide," Moss said. "It usually results in a negotiation and settlement" between both sides, he said.

Lakers star James isn't the only heavy hitter to salivate over the prospect of a new "Friday the 13th." Horror icon Stephen King dangled his own wish to write a new story from the perspective of Jason Voorhees himself.

"The best novel idea I never wrote (and probably never will) is I JASON," King tweeted in June 2020. "Just thinking about the legal thicket one would have to go through to get permissions makes my head ache."

That kind of attention is a far cry from the ragtag origins Cunningham and Miller came from to capitalize on the success of John Carpenter's 1978 classic "Halloween."

"We were both broke, trying to figure out a way to make money to keep the lights on for six months," Cunningham said.

Hundreds of millions of dollars later, the question over who benefited from all that cash is an obvious motivator in this saga.

"Sean made millions of dollars," Zerner said. And Miller, "got bupkis."

Everyone involved agrees there are still millions more sitting on the table should Jason wield a machete once again -- on film, television or video game -- especially after a massively successful reboot of the "Halloween" franchise.

If a deal isn't reached, Zerner offers one last resort.

"In 53 years, it'll be in the public domain, then anyone can make the movie," he said with a laugh.

So, theoretically, anyone could, you might say, take a stab at it.