Japan's Prime Minister will be first foreign leader to visit US under Biden, administration official says 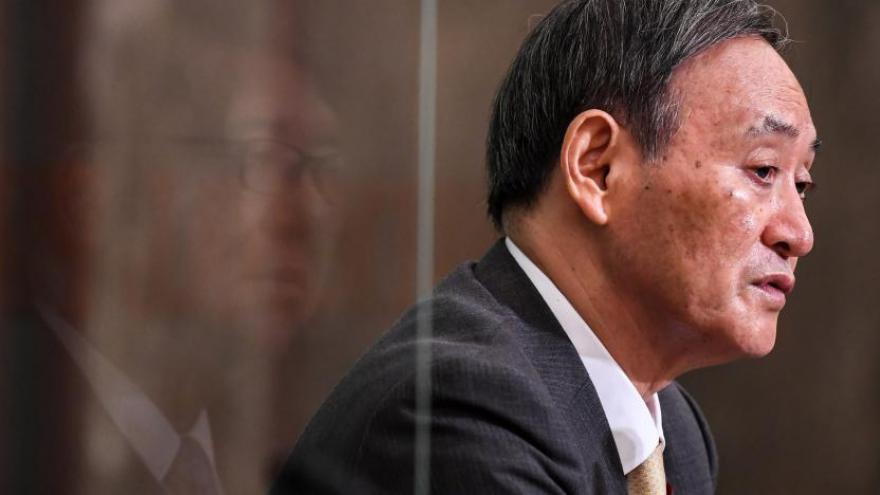 (CNN) -- Prime Minister Yoshihide Suga of Japan will be the first foreign leader to visit the United States since President Joe Biden took office and the global coronavirus pandemic halted much international travel, according to a senior administration official.

No firm date has been established yet for the trip, the official said.

Biden met virtually with Suga on Friday morning along with Prime Minister Narendra Modi of India and Prime Minister Scott Morrison of Australia, a group informally known as the "Quad." The meeting was Biden's first multilateral leader-level summit.

At the virtual summit, Biden announced an "ambitious new joint partnership" to boost Covid-19 vaccine manufacturing "for the global benefit" and "to benefit the entire Indo-Pacific."

National security adviser Jake Sullivan, who attended the meeting, said Friday that the four leaders committed to delivering up to 1 billion doses of Covid-19 vaccines to the Association of Southeast Asian Nations, the Indo-Pacific "and beyond," by the end of 2022.

Sullivan said at a White House briefing that the goal would be made possible with "Indian manufacturing, US technology, Japanese and American financing and Australian logistics capability."

They will coordinate with the World Health Organization and the COVAX initiative for equitable global access to Covid-19 vaccines, the White House said in a fact sheet.

The group will also launch a senior-level Quad vaccine experts group, the White House said, which will be comprised of  top scientists and government officials from each country. This group will design an implementation plan for the Quad Covid-19 vaccine effort.

In addition to the Covid-19 pandemic, Biden focused on combating the climate crisis in his opening remarks at Friday's virtual summit.

"We're establishing a new mechanism to enhance our cooperation and raise our mutual ambitions as we address accelerating climate change," Biden said.

The "Quad" partners will pledge to fully implement the Paris agreement, to work together on global climate actions and to cooperate on climate mitigation, the second senior administration official said. Working groups also will be established between the countries to focus on climate issues, the official said.

Vice President Kamala Harris and Secretary of State Antony Blinken were seated alongside Biden at the meeting. In addition to Sullivan, White House Covid-19 coordinator Jeff Zients, the National Security Council's Indo-Pacific coordinator Kurt Campbell and the NSC's senior director for South Asia Sumona Guha also attended the meeting in person, according to a pool report.

Biden told the leaders on Friday: "A free and open Indo-Pacific is essential to each of our futures, our countries. The United States is committed to working with you, our partners, and all our allies in the region to achieve stability."

The multilateral meeting comes the week before two top Biden administration officials, Blinken and Sullivan, are set to meet with their Chinese counterparts in Alaska next week.

The Biden administration is planning a sweeping review of the Trump administration's posture toward China, including its crackdown on unfair trade practices and antagonistic military activities in Asia, all while pursuing what it calls a robust Indo-Pacific strategy, according to an administration official, CNN has reported.

The State Department has also announced that Blinken will travel to Tokyo and Seoul for 2+2 discussions alongside Defense Secretary Lloyd Austin next week.