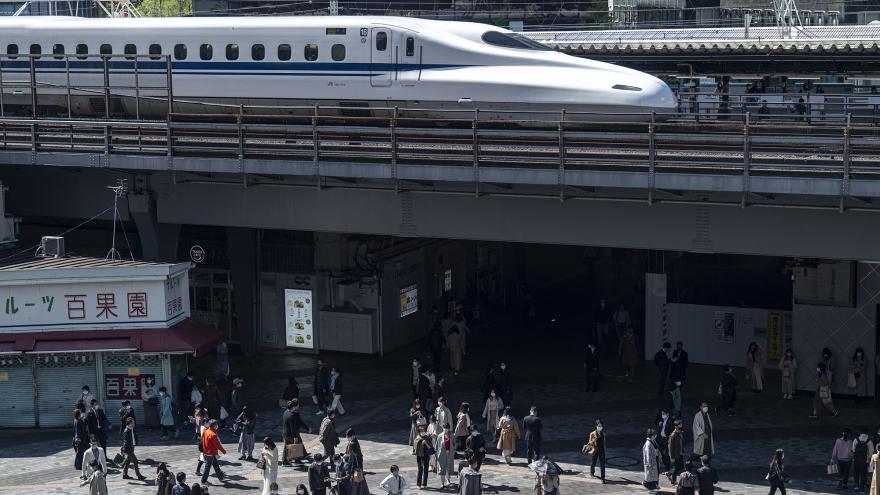 (CNN) -- Japan's trains have earned an almost cult-like status among foreign travelers for being punctual and efficient.

Social media users rave about them and many people in Japan take rail operators' obsessive dedication to arrive and depart on time for granted.

But sometimes that punctuality comes with a price -- especially if you're a train operator caught up in Japan's efficient transport web.

Take the case of a Shinkansen bullet train driver who left the cockpit to use the bathroom on May 16. This isn't your typical work break -- he did so while the train ran at 150 kilometers per hour (90 mph) with some 160 passengers on board.

The 36-year-old driver was only out of the Hikari No. 633 train's cockpit for around three minutes. He asked a conductor, who wasn't licensed to drive the train, to mind it in his absence at around 8:15 a.m. Japan local time as the train cruised between Atami station and Mishima station in Shizuoka Prefecture, Central Japan Railway Co. (JR Central), told CNN Travel.

Train conductors handle getting people on and off the trains and other tasks, but they don't actually drive. As a result, both employees are in trouble.

The driver later apologized, saying his prolonged toilet break was the result of abdominal pain. He added that he hadn't stopped the train at the nearest station because he didn't want to cause a delay.

JR Central has issued an official apology and reported the incident to the Ministry of Land, Infrastructure, Transport and Tourism. The company added that it will be reinforcing rules and awareness of best practices among its staffers and is considering disciplining the driver and conductor.

According to JR Central, which operates the government-owned Tokaido Shinkansen Line connecting Tokyo and Shin-Osaka, this is the first time a bullet train driver vacated the cockpit of a moving train while there were passengers on board.

Apologies of this nature aren't new in Japan.

Back in 2018, a train left a station 25 seconds before its scheduled departure time, after its conductor couldn't spot anyone on the platform, according to local media reports. That rogue action spurred Japan's national railway to condemn the driver's actions as "inexcusable" and to apologize for causing "great inconvenience."

A year before that, a Tsukuba Express conductor triggered a similar apology after he departed 20 seconds early, causing head-scratching and comparisons of train networks worldwide from perplexed commuters.

Another user tweeted: "Dhaka Metro would have to open an another department just to apologize all the time."

So why the need for profuse apologies? Because Japan, a country that prides itself on its discipline and orderliness, places that same pressure to be punctual on train staff.

And it has benefits: the average annual delay for the Tokaido line bullet train is less than 60 seconds. Those high standards have even inspired other countries to look to the country to see if they can apply learnings from Japan to their rail networks.

But there are rare instances when things can go wrong.

In 2005, a rush-hour commute train derailed in Hyogo prefecture after it pushed its speed limits to arrive on schedule. The deadly crash claimed the lives of over 100 people and prompted a rail union leader to argue that train drivers in Japan whose mistakes cause delays of as little as a minute are punished in various ways, like being forced to write meaningless reports-- in a move that places efficiency before safety.

Such unspoken pressures reveal that operating like clockwork can also, on some occasions, prove fatal.