January has been the deadliest month for Covid-19 with nearly 80,000 lives lost so far in the US 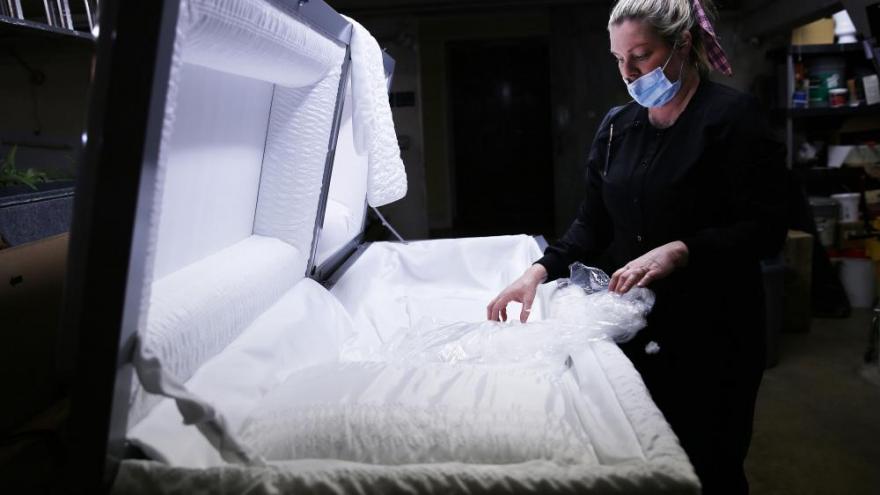 Embalmer and funeral director Kristy Oliver unwraps a new casket that will be used for a person who died after contracting COVID-19 at East County Mortuary on January 15, 2021, in El Cajon, California.

(CNN) -- January has already become the worst month for US Covid-19 deaths since the start of the pandemic.

As of Tuesday, there have been more than 79,000 coronavirus fatalities, topping the previous record set in December by more than a thousand, according to data from Johns Hopkins University.

The grim milestone underpins the growing demand from state officials for more vaccines so that Americans can be inoculated more quickly.

On Tuesday, President Joe Biden's Covid-19 coordinator, Jeff Zients, told governors that allocations would increase by around 16% starting next week, according to a source with knowledge of the call.

"The brutal truth is it's going to take months before we can get the majority of Americans vaccinated. Months. In the next few months, masks, not vaccines, are the best defense against Covid-19," Biden said while announcing the federal government would buy and distribute more vaccine doses from Moderna and Pfizer.

With those additional doses, Biden said there would be enough to fully vaccinate 300 million Americans -- nearly the entire US population -- by the end of summer or early fall.

Supply of vaccines not meeting demand

Struggling after the stress of nearly a year of responding to the pandemic, states are eager to administer vaccines quickly and attempt a return to life as normal.

"We have to defeat it because Mississippians are done. We're done burying loved ones who were lost to this virus. We're done with stressed hospitals. We're done with the fearful talk of lockdowns and shutdowns. We're ready for community again," said Mississippi Gov. Tate Reeves, who announced that the state celebrated about 200,000 vaccines delivered.

The director of the Maine Center for Disease Control and Prevention said he was "very encouraged" by the new presidential administration's approach to vaccinations, but said the state is still struggling with the dearth of vaccines.

"We know that right now the number of individuals who want to be vaccinated greatly outstrips the supply of vaccine that we have available," Dr. Nirav Shah said.

Colorado Gov. Jared Polis said his conversations with the Biden administration have made him feel hopeful about the future of vaccine distribution, but that "we cannot yet count on additional supply yet."

Even if the administration delivers on the 16% increase in allocations promised, New York Gov. Andrew Cuomo told MSNBC's Nicolle Wallace that it won't be enough.

"We're functionally out. We start to get a new allocation over the next few days," Cuomo said.

"That will not go to waste," said Holcomb. "Like Governor Polis and 48 other governors, we need more."

As of Wednesday, according to the Centers for Disease Control and Prevention, more than 20 million people have gotten at least one dose of a vaccine, a benchmark the Trump administration had said would be reached by the end of 2020.

More than 47 million doses have been distributed to states, though, and the discrepancy between the number of people vaccinated and the doses distributed can at least partly be attributed to states holding back enough to give people a second dose, as required for both vaccines now approved in the United States, health officials said.

"Some of what the states have right now is inventory to do the very, very important second shot," White House Covid-19 Response Coordinator Jeff Zients said Wednesday.

"I think it's important that when you're looking at states' inventories that you recognize that some of that inventory is being held for the very important second shot."

Some of the distributed doses may have also just arrived at their destination or may still be on the way, and there's also a lag in reporting the number of shots given, CDC Director Dr. Rochelle Walensky said in a CNN town hall Wednesday night.

Still, a bottleneck remains, she said.

"When you do all that math, you still end up with some millions of doses that are sitting on the shelves and have not yet been administered," Walensky said.

"And in fact, that's one of the ways that we have to get resources to the states to make sure that they can quickly administer the vaccines that are on the shelves."

Adding to public fears is the spread of variants of the coronavirus.

On Tuesday, Kentucky Gov. Andy Beshear announced that two cases of the variant first identified in the United Kingdom have been confirmed in the state.

The variant, called B.1.1.7, has been shown to spread especially quickly, according to modeling by the CDC. And a UK report released Friday states there is "a realistic possibility" that the new variant has a higher death rate than other variants.

It has been detected in more than 20 US states, and New York has 42 known cases, Gov. Andrew Cuomo and State Health Commissioner Dr. Howard Zucker said Wednesday.

The variant and others reported around the country are beginning to affect test results, Dr. Timothy Stenzel, director of the US Food and Drug Administration's Office of In Vitro Diagnostics and Radiological Health, said in a briefing Wednesday.

The agency is asking test developers to ensure their tests can detect the virus as it continues to mutate, Stenzel said.

"We are going to start beginning to ask developers how they think they can monitor for variants of concern," he said.

The threat of variants has made reopening the state a greater concern in California, a recent epicenter of the pandemic in the United States, Los Angeles County public health director Barbara Ferrer said.

"This would not be the time to think just because we are reopening that things are looking rosy," she said noting that asymptomatic spread is a problem. "We do need to move through the next few weeks with caution. At many other points where we've been reopening our sectors, we in fact have seen a bump up in our cases (and) we can't really afford that."

Los Angeles County reported 307 Covid-19 deaths Wednesday, its second-highest number in a single day. The highest number was 318 on January 8.

The good news is that the B.1.1.7 variant doesn't seem to affect the efficacy of the vaccines now available at all, according to Dr. Anthony Fauci, the nation's leading infectious disease expert.

Tests indicate that a variant first seen in South Africa may interfere with vaccine response somewhat, but not significantly.

For his part, Pfizer CEO Albert Bourla tried to calm fears around the variants with assurances that the groundwork is already being laid to fight them.

"We should not be frightened, but I think we need to be prepared," Bourla said at the Bloomberg The Year Ahead event Tuesday. "Once we discover something that it is not as effective, we will very, very quickly produce a booster dose that will be a small variation to the current one."

Meanwhile, there was a glimmer of good news Tuesday for parents who are hoping to return their kids to school.

A report from the CDC said that with the right mitigation strategies, it's possible to open K-12 schools for in-person learning with minimal Covid-19 transmission.

Those mitigation strategies include wearing masks, social distancing and limiting time in shared indoor spaces, according to the study from the CDC's Morbidity and Mortality Weekly Report.

In Ohio, Gov. Mike DeWine said he aims to have anyone who works in a school receive their first vaccine dose in the month of February at the very least in hopes of sending all students back to school by March 1.

Currently, people older than 75 and those with certain medical conditions are able to receive vaccines. On February 1, those 70 and older and employees of K-12 schools will be eligible for the vaccine, he said in a news conference Tuesday.

School reopenings have been a priority for many officials as students across the country have spent months learning remotely. But local leaders have approached the return in various ways.

Of the 20 largest school districts in the country, nine are currently all online, eight offer a choice of either full in-person or all online, two have a hybrid plan and one in Hawaii varies plans based on infection rates among different islands.