January 6 was opposite of 1776, judge tells rioter who carried revolutionary flag into US Capitol 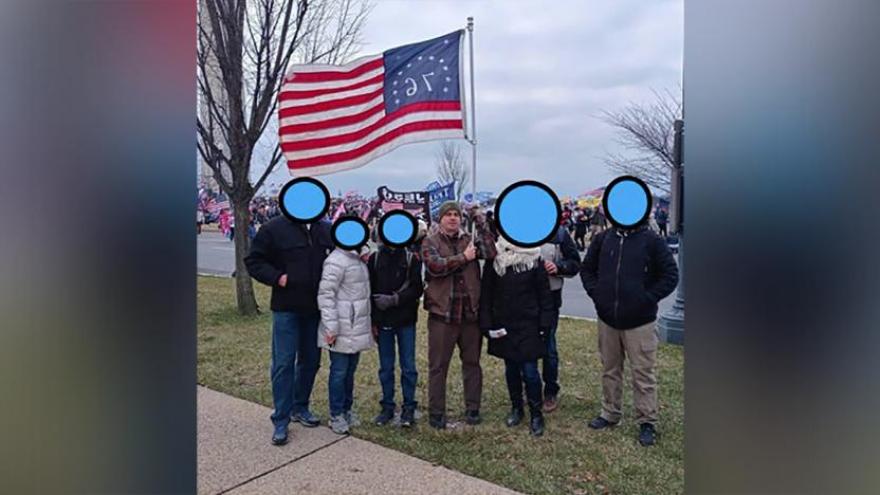 According to a sentencing memorandum, Wrigley posted the this photo where he was standing in a group as he held the 1776 flag aloft to Facebook. The Department of Justice obscured the faces of the other individuals in the photo.

(CNN) -- A federal judge slammed one of the January 6 rioters for waving a 1776 flag while storming the US Capitol, saying his attempt to overturn a democratic election betrayed the values of the American Revolution.

Judge Amy Berman Jackson made the comments Thursday at a sentencing hearing for Andrew Wrigley, 51, from Philadelphia. He spent one minute inside the Capitol building during the attack, and pleaded guilty to a misdemeanor for unlawfully protesting on restricted grounds.

Jackson sentenced Wrigley to 1.5 years of probation and a $2,000 fine. The 1776 flag that Wrigley brought into the Capitol was repeatedly brought up during his sentencing hearing Thursday in DC District Court.

"The point of 1776 was to let the people to decide who would rule them," Jackson continued, contrasting it with January 6, where "the point was to substitute the will of the people with the will of the mob... It was not under the banner of 1776."

"You were a participant, albeit a minor one, in an effort to subvert and overturn the democratic process," Jackson said. "That day didn't just cost you a lot, it cost our country a lot."

Federal prosecutors had argued in court papers that the flag suggested he supported a "rebellion against a ruling government" and that the 1776 comparison is popular among far-right conspiracy theorists. They asked the judge to sentence Wrigley to two months of house arrest, which she declined to do.

The 1776 flag represents a "revolt against the sovereign," prosecutor Mona Furst said.

Wrigley's attorney said her client never endorsed violence and pushed back on the Justice Department's attempts to turn the flag into an aggravating factor.

"I mean, our basketball team is called the 76ers," defense attorney Ann Flannery said. "It's not a symbol of revolution in the way the government describes it. ... He did not bring that flag to suggest another revolution. He brought it to show pride and to exercise his rights as a citizen."

More than 680 people have been charged in connection with the January 6 attack. So far, 46 defendants have been sentenced, and about half were jailed.