January 6 vs. September 18: How law enforcement hopes to prevent another riot 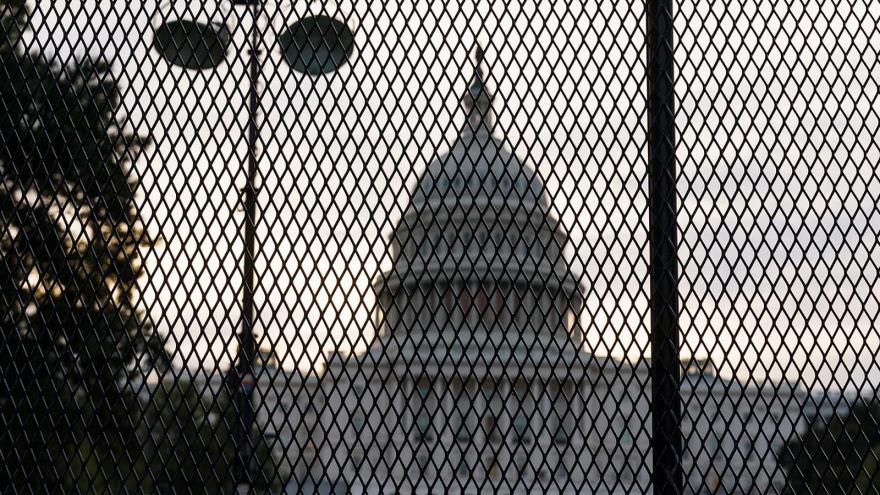 Security fencing has been reinstalled around the Capitol in Washington, Thursday, September 16, ahead of a planned September 18 rally by far-right groups.

(CNN) -- A new fence, an information-sharing alert and ramped-up airport security are just a few of the ways law enforcement is preparing to prevent another deadly insurrection ahead of Saturday's rally aimed at showing support for those arrested in connection with January 6.

Criticism of the security failures around the US Capitol riot last winter has loomed large in the minds of federal officials and law enforcement partners ahead of Saturday's right-wing rally, resulting in a concerted effort to avoid the mistakes of eight months ago that left front-line officers unprepared for the violence that unfolded.

This time, officials are preparing for the worst and erring on the side of caution. Unlike on January 6, officers are well aware of the threats related to Saturday's event, which is expected to be a much smaller gathering with some spreading the false narrative that federal agencies will use the rally as an opportunity to arrest attendees.

The Department of Homeland Security issued a warning Thursday about the potential for violence from people involved in or opposed to the "Justice for J6" rally.

Officials have taken steps to ensure there will be a significant security presence and additional help will be on standby -- with the DC National Guard ready to provide assistance in case of an emergency, a source familiar with security conversations around the event told CNN. That is a marked shift from what occurred ahead of January 6, when it took the National Guard hours to mobilize as the Capitol was being overrun.

Secretary of Defense Lloyd Austin approved 100 DC National Guard members to be stationed nearby "as a Physical Security Task Force to augment law enforcement" during the demonstration, Lt. Col. Chris Mitchell, a Defense Department spokesman, said in a statement.

Concerns around this weekend's rally have been amplified by recent statements from former President Donald Trump, including one on Thursday in which he defended the Capitol rioters as "people being persecuted so unfairly" and continued to perpetuate false claims about the "Rigged Presidential Election" that security officials have repeatedly warned will almost certainly lead to more violence by domestic extremists.

Security preparations began days ahead of time. US Capitol Police, which has the operational lead for the rally, briefed lawmakers throughout the week and the Department of Homeland Security, the FBI, US Capitol Police and others held a call with state and local law enforcement on Thursday to discuss the situation.

The DHS warning noted that event organizers had secured a permit for 700 attendees in Washington, but, according to media reports, local authorities expect a smaller crowd.

One of the overarching lessons from January 6 has been to increase information sharing about potential threats in a way that allows law enforcement to implement corresponding operational measures, multiple security officials have told CNN.

That's played out this week with US Capitol Police preemptively reinstalling fencing around the Capitol complex and coordinating with various law enforcement partners to ensure there is a substantial presence.

"What we realized after January 6 is that we had gotten a little bit lax in some of the aggressive conversations. All of us had," said Melissa Smislova, DHS deputy under secretary for intelligence enterprise readiness, at the Homeland Security Enterprise Forum on Tuesday, adding that since then, DHS has reinstituted biweekly threat calls and committed to meetings to discuss upcoming events and working groups.

"Some of it was just a lack of discipline, I think, a complacency, maybe even," she said.

The framework for information sharing among federal, state and local authorities was there, Smislova said, but "you had to actually seek it out, as opposed to having it brought to you."

"We have all collectively seen this as a failure on our part to communicate with each other, and to make absolutely certain that all of us have the same information. So that recommitment is what you've seen since January 6," she said.

Officials are preparing for the potential of violence -- both in Washington and in other cities around the US -- surrounding the rally, which organizers say is scheduled to start at noon ET.

There has been uptick in threats by individuals who are implying they are coming to Washington or going to other locations to engage in violence in furtherance of their beliefs, including the false narratives that the 2020 election was stolen and that the people arrested for their participation in the January 6 riot are being treated unfairly and were just trying to do the right thing, according to a federal law enforcement source.

"We are taking a very measured approach,'' the federal law enforcement source added, "but what we are seeing is definitely enough to cause concern that is resulting in these increased security measures."

Specific threats have been directed at the Capitol, members of Congress, Democrats, the Jewish community and liberal churches, according to two sources familiar and the DHS intelligence briefing obtained by CNN.

There is a real difference in how authorities are preparing for this event and what happened in the lead-up to January 6, the source said, pointing to both the planning efforts and increased information sharing.

"There's right now more people with their ears to the ground than I've seen before, that if a threat does pop up or information does, someone becomes aware of it, that it hopefully will not be left in a memo that doesn't get to people or report that people don't read," another law enforcement source said.

Leading up to this weekend, DHS has been involved in facilitating information sharing both within the national capital region and with state and local officials across the country.

On Monday, DHS designated the "Justice for J6" rally as a Special Event Assessment Rating 3, which is given to events of national or international importance that require limited federal support.

There are five potential levels for these security assessments, with the top rating requiring extensive federal interagency support.

However, no DHS security designation was given ahead of January 6 -- despite indications, such as social media posts, that additional security may have been needed at the Capitol that day, according to a Government Accountability Office report released earlier this summer.

"Out of an abundance of caution, DHS is coordinating with the U.S. Capitol Police and its partners across every level of government to maintain situational awareness and ensure public safety at rallies over the weekend," a DHS spokesperson told CNN in a statement Wednesday.

Officials have also acknowledged that over-communicating and making clear there will be a strong law enforcement presence can have a deterrence effect, pointing to two dates earlier this year -- the presidential inauguration on January 20 and the QAnon conspiracy about Trump becoming president again on March 4 -- as examples where threats did not materialize.

Pleas for a peaceful protest

The upcoming rally is being planned by Look Ahead America, a nonprofit led by former Trump campaign staffer Matt Braynard. The group is "dedicated to standing up for patriotic Americans who have been forgotten by our government," according to its website.

Capitol Hill, which was shocked and traumatized by the deadly riot in January, has taken extra precautions.

House Speaker Nancy Pelosi of California, for example, warned her Democratic colleagues in a letter that "there is a wish by some to continue the assault on the U.S. Capitol with misinformation and malice."

"The leadership of the Congress, on a bipartisan and bicameral basis, has been briefed by the Capitol Police Board on the nature of the threat and the unprecedented preparations to address another attempt to defile our national purpose," Pelosi said, referring to a briefing that congressional leadership received from US Capitol Police Chief Tom Manger on Monday.

Democratic Rep. Zoe Lofgren of California, a member of the House select committee investigating January 6, got a detailed briefing last week about rally security from Manger, the architect of the Capitol and the House sergeant-at-arms, according to a source familiar. It lasted roughly an hour.

The briefing was "much more thorough" than the one lawmakers had received prior to January 6, the source added.

A Capitol Police spokesperson told CNN on Tuesday that the department is in contact with the rally organizer. The Capitol Police has also taken several steps to prepare in ways it did not prior to January 6, despite there being no specific threat around the event.

"We have talked to the military and we have multiple agencies assisting," the Capitol Police said in a statement to CNN when asked if there was an imminent request for National Guard help. "We cannot provide specifics as we do not want to give away security sensitive info."