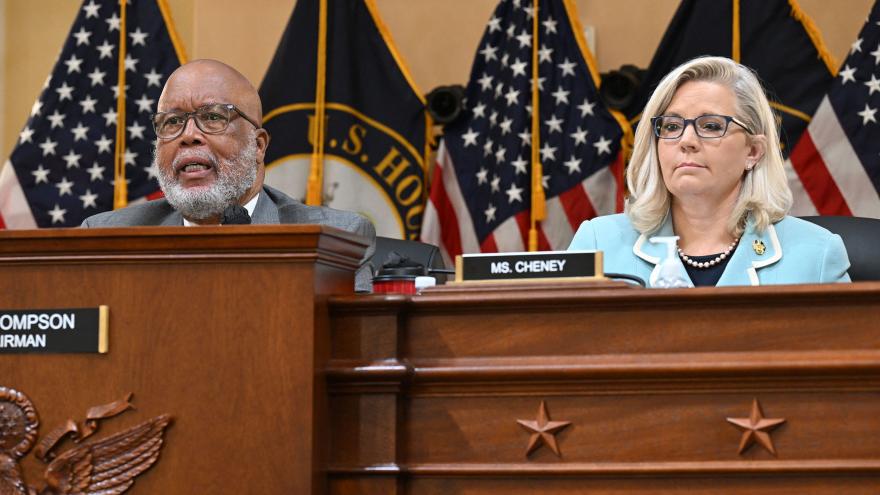 (CNN) -- The House January 6 committee corroborated key details involving former President Donald Trump's heated exchange with the Secret Service when Trump was told he could not go to the Capitol -- the latest in a string of shocking revelations that have come from the summer hearings with their expected high-profile conclusion next week.

The corroboration comes as the committee plans to zero in on Trump's conduct on January 6, 2021 at its hearing next week, which will focus on Trump's response -- or lack thereof -- as rioters breached the Capitol walls and forced lawmakers to flee their chambers.

Select committee members have accused Trump of a "dereliction of duty" for failing to act as the Capitol was under attack -- and his vice president, Mike Pence -- was in danger. Next week's hearing is the last planned of the committee's eight public hearings as the panel has sought in each session to tie Trump to the deadly attack that unfolded on January 6.

"There will be a lot of information, a lot more clarity about the details of the things that happened that day, what the people who were working in the White House, working around the President and even people who were advising him to do things, actions that he was not taking based off of their reasoned advice," Virginia Democratic Rep. Elaine Luria, who will help lead the next hearing, told CNN this week. "I look at it as a dereliction of duty. He didn't act. He did not take action to stop the violence."

New details about Trump's efforts to overturn his 2020 election loss to Joe Biden have continued to emerge. On Saturday, The New York Times reported that a little-known conservative lawyer, William Olson, spoke to Trump in December 2020 about efforts to enlist the Justice Department to sign on to a lawsuit at the US Supreme Court to overturn the presidential election results, according to a memo Olson drafted documenting the call. Olson urged Trump to replace his then-acting attorney general, Jeffrey Rosen, if Rosen would not endorse the Supreme Court lawsuit, according to the memo. Olson also encouraged Trump to replace lawyers in the White House counsel's office and to take steps related to the election that would effectively have amounted to "martial law."

A prime-time hearing next week

The committee announced Friday that it would hold the hearing on Thursday, July 21 at 8 p.m. ET -- the panel's second prime-time session to try to maximize viewership and attention. The panel has not said who will testify at next week's hearing, though CNN has previously reported that former Trump White House deputy press secretary Sarah Matthews is expected to be a witness.

The committee is also likely to lean heavily on video clips from the deposition of Pat Cipollone, Trump's former White House counsel. Cipollone sat for a transcribed interview just last week, and the committee used clips from the interview 14 times during Tuesday's hearing, including playing video of Cipollone discussing Trump's response on January 6 to tee up next week's hearing.

While next week is the last planned of this summer series of January 6 public hearings, the select committee has said all along it's not done with its investigation. Rep. Adam Kinzinger of Illinois, one of the panel's two Republicans, told the Wall Street Journal in an interview this week that the committee is still considering asking Trump to testify and might request a written response from Pence or issue a subpoena for him to testify.

The January 6 committee is only one of Trump's potential investigative concerns, even as he considers moving forward with a 2024 presidential campaign announcement.

In Georgia, Fulton County's district attorney has issued subpoenas for the testimony of Trump's allies before a special grand jury investigating Trump's efforts to overturn the 2020 election results in the state. Sen. Lindsey Graham, a South Carolina Republican, is seeking to quash the subpoena for his testimony, which is related to at least two calls that Graham made to Georgia Secretary of State Brad Raffensperger and his staff after the election.

In New York, Trump and his children Donald Trump and Ivanka Trump are set to be deposed after losing court battles to avoid testifying in the state attorney general's civil investigation into the Trump Organization. The depositions were scheduled to begin next week but were temporarily delayed due to the death of Trump's first wife, Ivana Trump.

And in Washington, DC, former Trump adviser Steve Bannon's efforts to delay his contempt-of-Congress trial were rejected this week by a federal judge, and the trial is slated to begin next week.

There are also new questions that have emerged surrounding the Secret Service and January 6, amid a flurry of new questions over the agency deleting text messages on January 5 and 6, 2021 shortly after they had been requested by oversight officials.

The Homeland Security inspector general sent a letter to the House and Senate Homeland Security committees alerting them that the messages had been erased "as part of a device-replacement program" after the watchdog had requested electronic communications from the Secret Service.

Thompson told CNN after the meeting that Cuffari said that Secret Service has not been fully cooperative. He added that the committee would work "to try to ascertain if those texts can be resurrected."

"We've had limited engagement with Secret Service. We'll follow up with some additional engagement now that we've met with the IG," Thompson said.

"In fact, the Secret Service has been fully cooperating with the OIG in every respect -- whether it be interviews, documents, emails, or texts," the agency said.

Rep. Jamie Raskin, a Maryland Democrat on the Select Committee, said there seemed to be "contradictory statements' between the inspector general and the Secret Service over whether the text messages were actually gone.

The Secret Service's response on January 6 was already under scrutiny in light of the public testimony earlier this month from Cassidy Hutchinson, the former aide to White House chief of staff Mark Meadows who recounted extraordinary details about Trump's angry exchange with the Secret Service on January 6.

In her public testimony, Hutchinson said that then-White House deputy chief of staff Tony Ornato -- who had previously worked for the Secret Service and then returned to the agency in 2021 -- told her on January 6 that Trump was so enraged at his Secret Service detail for blocking him from going to the Capitol after his speech on the Ellipse that "he reached up towards the front of the vehicle to grab at the steering wheel."

Hutchinson said that Ornato told her Trump "then used his free hand to lunge towards" his Secret Service lead agent, Robert Engel.

Hutchinson testified that Ornato told her the story in front of Engel and that Engel did not dispute the account.

Trump and his allies have tried to cast doubt on Hutchinson's account -- which included several additional damning details about Trump's conduct. After Hutchinson testified, a Secret Service official who would not go on the record said that Engel would deny parts of the story and that the agents involved would testify publicly to that effect, though they haven't gone back to the committee to testify.

Neither Engel nor Ornato have commented publicly.

But additional corroboration of Hutchinson's account has emerged since her testimony. CNN reported earlier this month that two Secret Service sources have said they heard about Trump angrily demanding to go to the Capitol and berating his detail when he didn't get his way.

The sources told CNN that stories had circulated about the incident following January 6, which included details similar to what Hutchinson described.

In addition, CNN reported on Thursday that a Metropolitan Police Department officer corroborated details of Hutchinson's account and recounted what was seen to committee investigators.