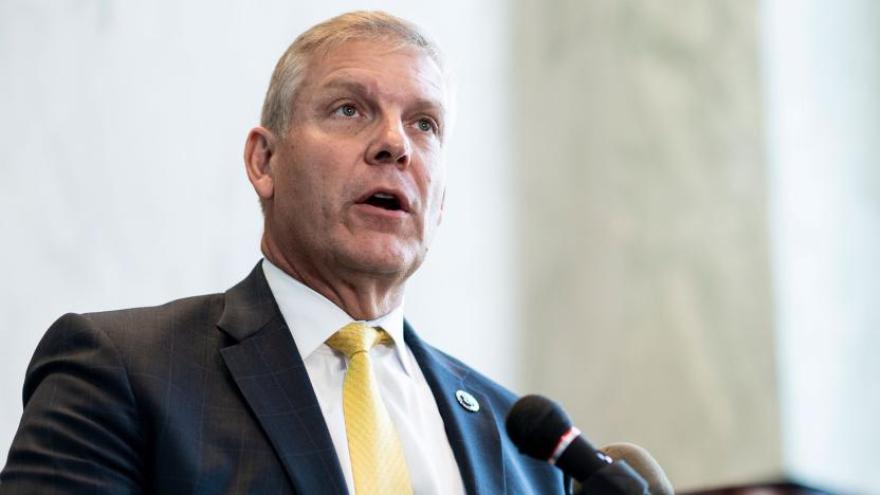 The House select committee investigating the January 6 Capitol riot has released footage that shows one of the individuals to whom Rep. Barry Loudermilk of Georgia gave a tour on January 5 was outside the building during the insurrection.

(CNN) -- The House select committee investigating the January 6, 2021, US Capitol riot has released footage that shows one of the individuals to whom GOP Rep. Barry Loudermilk of Georgia gave a tour on January 5 was outside the building during the insurrection screaming threats about House Speaker Nancy Pelosi.

The video released by the committee seems to challenge the findings of US Capitol Police as detailed in a letter sent to Republican lawmakers this week, which said the department conducted a review of security footage from January 5 and did not observe any activities it deemed to be suspicious or consistent with a reconnaissance tour.

Capitol Police Chief Tom Manger said the video shows Loudermilk "with a group of approximately 12 people which later grew to 15 people" walking through the Capitol office buildings on January 5. Manger also stated that the group of visitors did not "appear in any tunnels that would lead them to the US Capitol."

"On May 19, 2022, the Select Committee invited you to meet with us about evidence of a tour you provided on January 5, 2021. Based on our review of surveillance video, social media activity, and witness accounts, we understand you led a tour group through parts of the Capitol complex on January 5, 2021. That group stayed for several hours, despite the complex being closed to the public on that day," the committee's chairman, Democratic Rep. Bennie Thompson of Mississippi, said Wednesday in a new letter to Loudermilk.

"Surveillance footage shows a tour of approximately ten individuals led by you to areas in the Rayburn, Longworth, and Cannon House Office Buildings, as well as the entrances to tunnels leading to the U.S. Capitol," he added. "Individuals on the tour photographed and recorded areas of the complex not typically of interest to tourists, including hallways, staircases, and security checkpoints."

Rep. Zoe Lofgren, a member of the House select committee, told CNN's Erin Burnett on "OutFront" later Wednesday that she was "surprised by the letter because if you look at the video you can see with your own eyes what was happening," adding that it "was not reflected in the letter from the Capitol Police."

Loudermilk pushes back against 'false narrative'

Loudermilk said in a statement to CNN after the video's release Wednesday that "the Capitol Police already put this false accusation to bed, yet the Committee is undermining the Capitol Police and doubling down on their smear campaign, releasing so-called evidence of a tour of the House Office Buildings, which I have already publicly addressed."

"As Capitol Police confirmed, nothing about this visit with constituents was suspicious. The pictures show children holding bags from the House gift shop, which was open to visitors, and taking pictures of the Rayburn train," he added. "This false narrative that the Committee and Democrats continue to push, that Republicans, including myself, led reconnaissance tours is verifiably false. No where that I went with the visitors in the House Office Buildings on January 5th were breached on January 6th; and, to my knowledge, no one in that group was criminally charged in relation to January 6th."

Loudermilk also said he has received threatening voicemail messages after the committee's allegations about the tour.

Lofgren, a California Democrat, emphasized that the committee hadn't accused Loudermilk of any wrongdoing by requesting he speak with them, saying, "We asked him to come in and talk to us about this tour, which he has not done even yet."

"And as you can see from the video, we were going to go over the video with him. Since he has refused to come in, we released it and he can look at it now," she continued.

Asked by Burnett what would motivate the Capitol Police to provide a differing account, Lofgren said, "I have no idea whether it is a competence issue or what, but it is not accurate. And as you can see with your own eyes from the video, what they said was not accurate."

The committee first reached out to Loudermilk last month. The committee also indicated it had reviewed evidence that "directly contradicts" previous claims by Republican lawmakers who said security footage from the days before January 6 shows there were "no tours, no large groups, no one with MAGA hats on" at the US Capitol complex. Days after the attack, some Democrats began accusing Republicans of providing tours to individuals who later went on to storm the Capitol.

The committee has not explicitly accused Loudermilk of leading a reconnaissance tour but it did ask him to voluntarily answer questions about what is seen on the video released Wednesday. Loudermilk's story, however, has repeatedly shifted in terms of the details of what happened on January 5.

As the Capitol riot was unfolding, Loudermilk spoke to a local Georgia radio station and said he met with "about a dozen" people from his home state the day prior on Capitol Hill who had traveled to Washington for the Trump rally that preceded the attack.

Loudermilk said during the interview that he hosted the people in his office and on the day of the riot, checked to make sure they were safe.

"We actually had about a dozen people up here that wanted to come and visit, we had them on our office. They definitely were, uh, peaceful people that we'd met at church ... they were supporters of the President, they just wanted to be up here as if it was another rally," he told Georgia radio station WBHF on January 6, 2021, from an undisclosed location as rioters were storming the Capitol.

"We've actually checked on them to make sure they were safe. They saw what it was turning into , they immediately turned and went back down the Mall to get away from the crowd here," he added.

In the time since, Loudermilk has characterized the participants in this January 5 meeting as his constituents, including families with children.

House Republicans suggested they may release video they believe exonerates Loudermilk of any insinuation that he led a so-called "reconnaissance" tour the night before the riot.