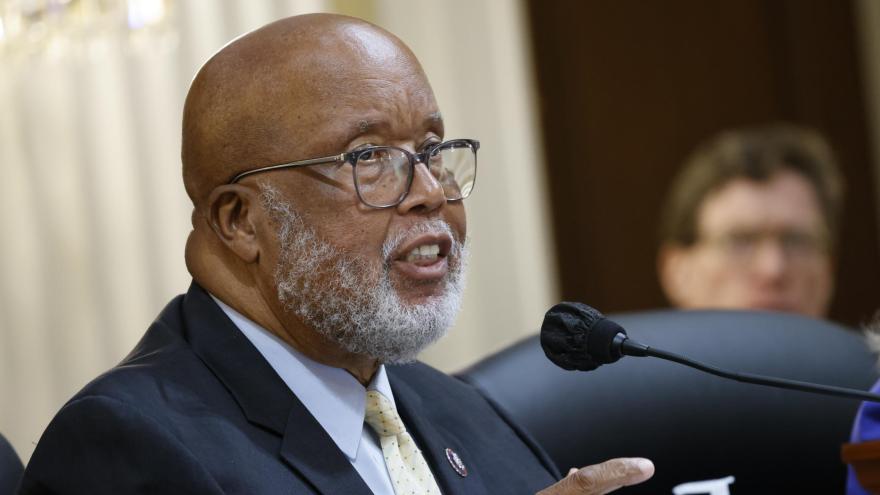 (CNN) -- The Democratic chairman of the House select committee investigating the January 6, 2021, attack on the US Capitol said Thursday that the panel will present witnesses describing conversations between extremist groups and members of former President Donald Trump's orbit.

Asked by CNN's Jake Tapper whether there were "going to be witnesses that describe actual conversations between these extremist groups and anyone in Trump's orbit?" Rep. Bennie Thompson responded: "Yes.

"Obviously, you'll have to go through the hearings, but we have a number of witnesses who have come forward that people have not talked to before, that will document a lot was going on in the Trump orbit while all of this was occurring," the Mississippi Democrat said.

Thompson did not elaborate on the nature of the conversations, though evidence gathered in the Justice Department's Oath Keepers and Proud Boys cases shows that both groups stuck close to some right-wing VIPs, especially those they believed they were providing volunteer "security" for on January 5 and 6, 2021.

Joshua James, an Oath Keeper who has pleaded guilty to seditious conspiracy, chauffeured Roger Stone, for instance. Stone also has close ties to prominent members of the Proud Boys, going back years.

During the riot, some Oath Keepers discussed trying to help Republican Rep. Ronny Jackson -- though they were not clear whom they were in touch with to learn about Jackson's status.

And according to another piece of evidence in the case against the Oath Keepers, a lawyer working with the group discussed being in touch with people around the Trump campaign on a recorded November 2020 conference call.

Yet not all the contacts are described so explicitly. One Oath Keeper said as part of his guilty plea that he witnessed group head Stewart Rhodes call an unnamed person the night of January 6, and ask to speak to Trump directly. The person didn't oblige.

Thompson told CNN's Erin Burnett on "OutFront" on Friday that the panel will show proof of the relationship between the Oath Keepers and members of the former President's inner circle, though they haven't found evidence that Trump himself engaged directly with the group. The committee, he said, "found close relationship with those extremist elements in the country, especially the Proud Boys and Oath Keepers."

"There are people, as I said, in his orbit that have engaged these groups all along," Thompson said Friday.

Thompson's comments follow the panel's first prime-time hearing, in which it detailed the findings of its investigation and played new video from closed-door depositions of members of Trump's team and depicting the violence at the Capitol. The committee introduced the American public to two of the most militant far-right extremist groups in the country, which were present on January 6: The Proud Boys and Oath Keepers.

These groups were at the vanguard of the riot. They were among the first to breach the building, and are accused of planning violence.

Explaining the committee's approach to the hearings, Thompson told Tapper that "everything that the public heard tonight is factual. We can prove it. Because as you know, the fact checkers will look at everything that was presented, and we made a conscious effort to only put on what we could prove."

"So, we put the tweets from the President. We put video from the President," he continued. "We put everything on, but we put it in an order that the public could now see that even when the President was told by the chief law enforcement officer, that he appointed, attorney general, that there was no fault in the election. Obviously, the people he was listening to were not reputable in terms of looking at the evidence. And so, the President blew him off and started listening to people who had no real ground on the issue."

Thursday's hearing was the first in a series this month that will highlight the findings of the panel's investigation, which included interviews with more than 1,000 people about how Trump and his team tried to overturn the results of the 2020 election on multiple fronts.