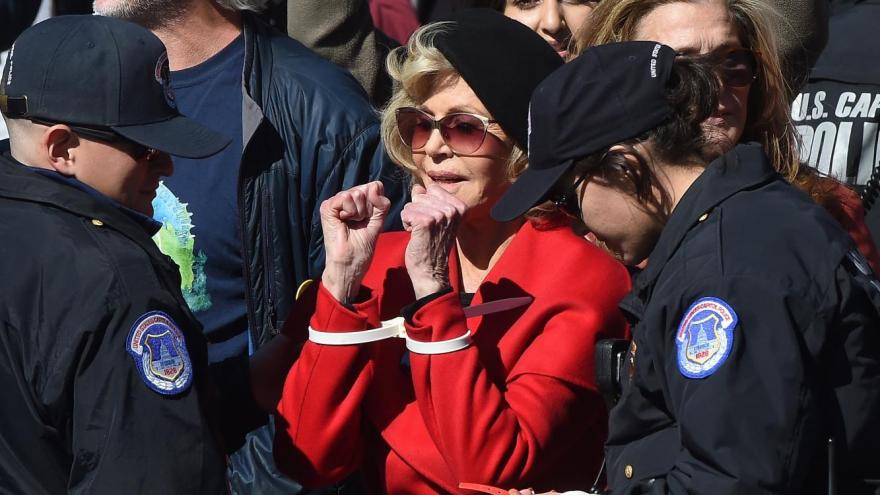 Actress and activist Jane Fonda is arrested outside the US Capitol during a climate change protest.

(CNN) -- Actress and environmental activist Jane Fonda says "it feels good" to be arrested at the climate change demonstrations in Washington -- and that she moved to the nation's capital specifically so she could protest.

Fonda talked to CNN's Anderson Cooper on "Full Circle" and explained why she welcomes being taken away in handcuffs at the climate protests.

"This is the first time that I have been arrested for civil disobedience, and it feels good," she said from Washington.

Fonda explained "you don't feel very good if you're not doing enough" to bring awareness to climate change, so she decided to act.

"When you are a celebrity the responsibility is even greater to try to use your platform to get the word out," Fonda said.

"Together with Green Peace we developed 'Fire Drill Fridays,' and I feel much better now, and I'm not depressed anymore. I feel like I'm doing everything I can."

Fonda has been arrested several times since the weekly protests began October 11.

She said she decided to move to Washington so she could engage in civil disobedience to make a change on the political front. She said she wanted to relocate for a year, but because of her filming schedule, she was allowed four months -- "so I've moved here for four months."

Each week, she and members of various advocacy organizations gather at the US Capitol to bring attention to the climate crisis.

Fonda's red coat is the last clothing she will ever buy

Last week, Fonda told CNN that she wants to get arrested every Friday, and since November 29, she's been arrested four out of eight weeks.

Fonda was arrested for the first time on October 11 in a red coat that has now become somewhat iconic.

Fonda told Anderson Cooper her coat is the last item of clothing she will ever buy. She was inspired by Greta Thunberg, and has stopped clothes shopping in order to reduce her carbon footprint.

"We look to shopping for our identity. We buy things we don't need," she said. "I've got enough already. I don't need anything more."

For the protests, "we decided that I should wear red, and I didn't have anything red so I went to Neiman's and I got this coat on sale," Fonda said. "I'm just going to recycle what I have from now on."

Fonda said she believes in the protests because she knows that it can impact the landscape of climate change, and she is prepared to be arrested over and over again.