Jan. 6 rioter who said she wanted to shoot Nancy Pelosi sentenced to 60 days behind bars 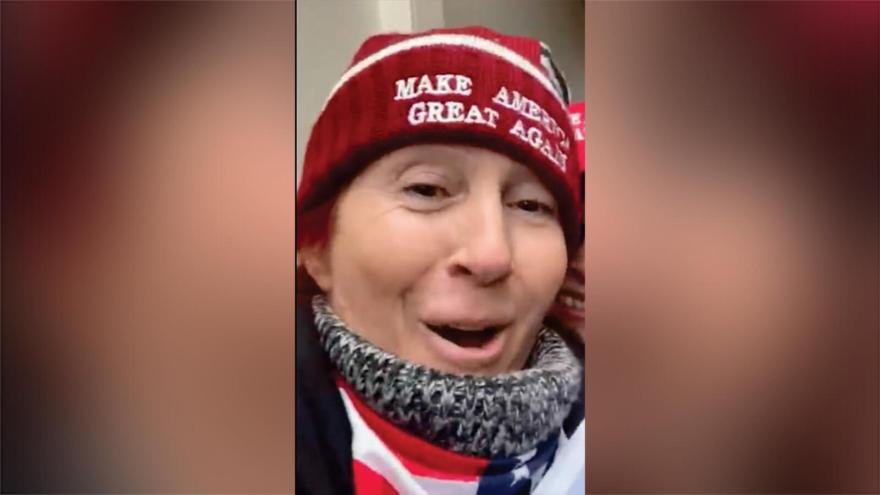 Dawn Bancroft, seen here in an frame from a video referenced in the criminal complaint.

(CNN) -- A January 6, 2021, US Capitol rioter who said she had looked for House Speaker Nancy Pelosi to kill her that day was sentenced to 60 days behind bars Thursday.

"We broke into the Capitol, we got inside, we did our part," Dawn Bancroft said in a selfie video she took after leaving the Capitol on January 6. "We were looking for Nancy to shoot her in the frickin' brain, but we didn't find her."

Sullivan said he considered sentencing Bancroft to more time behind bars but chose to stick with the Justice Department's request of two months.

Bancroft, 59, pleaded guilty to unlawfully protesting in September and will also serve three years probation and 100 hours of community service.

"The comments made by you on the steps of the Capitol in the presence of others ... they were reckless statements that people should be held accountable for," Sullivan said, adding that others could have acted on her comments.

"How many others left there that day (thinking), 'Hey, next time I come I'm going to bring my bullets for Nancy,'" Sullivan said.

Bancroft told the court that she "made a very bad choice that day" and that she regretted her actions. She also said that she had been threatened and harassed with phone calls and letters since her arrest.

In a court filing, Bancroft's attorney, Carina Laguzzi, argued that her client was not being literal in her threats against Speaker Pelosi.

"Who hasn't told their spouse, 'I am going to kill you if you leave (your) shoes on the carpet again!'" Laguzzi wrote. "And yet these statements are not meant to be taken literally."

Laguzzi also blamed, in part, the speech then-President Donald Trump gave at the Stop the Steal rally on January 6 as well as the impact Covid-19 had on mental health and propaganda on social media for her client's actions that day.

"It is the defense's contention but for the culmination of all of these events, Ms. Bancroft would not be before the Court," Laguzzi wrote.