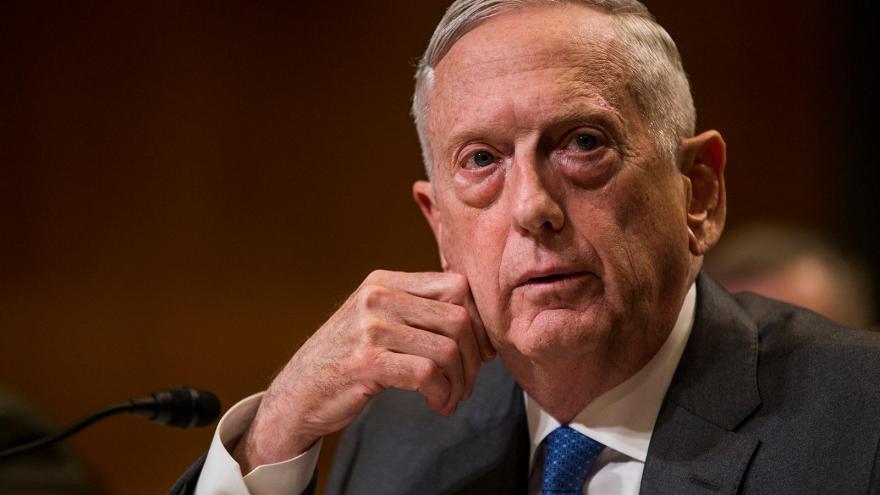 Former Secretary of Defense Jim Mattis, seen here in May 2018, recently appeared in a PSA to urge people to wear masks.

At the start of the video, Mattis sports a blue bandana and pulls it down to talk.

In the 30-second YouTube video posted Monday by the city of Richland, Washington, he stresses that since the pandemic began, it's clear the virus "is not going away on its own."

"Let's wear those face coverings and let's work together on this to beat Covid," Mattis says.

Washington state Gov. Jay Inslee, a Democrat, announced Tuesday that a new statewide mandate requiring residents to wear face masks will go into effect later this week in response to a new surge of cases.

Mattis' message echoes pleas from hundreds of officials and experts nationwide that have urged Americans to continue heeding guidelines that put in place to curb the spread of the virus -- including maintaining a distance, washing their hands often and wearing face masks when out in public.

Despite health officials suggesting face masks work to keep germs from spreading further, there's been consistent backlash from residents who say they don't want face coverings. And some government leaders have also refused to put requirements in place for masks.

So far, more than 2.3 million Americans have been infected with the virus and at least 121,225 have died.

A retired four-star Marine general, Mattis served as President Donald Trump's defense secretary for nearly two years until he resigned in 2018 after Trump announced plans to withdraw US troops from Syria, citing irreconcilable policy differences in his resignation letter.

In a statement earlier this month, Mattis, who had kept mostly silent since leaving the administration, excoriated the President and his actions, accusing Trump of actively trying to divide the country and abusing his executive authority.

Amid the coronavirus pandemic and social unrest over police brutality, Mattis criticized Trump for clearing peaceful protesters in front of the White House so Trump could hold a photo-op and for threatening to use the military to respond to the outbreaks of violence in protests.

"We can come through this trying time stronger, and with a renewed sense of purpose and respect for one another," Mattis wrote. "The pandemic has shown us that it is not only our troops who are willing to offer the ultimate sacrifice for the safety of the community. Americans in hospitals, grocery stores, post offices, and elsewhere have put their lives on the line in order to serve their fellow citizens and their country."