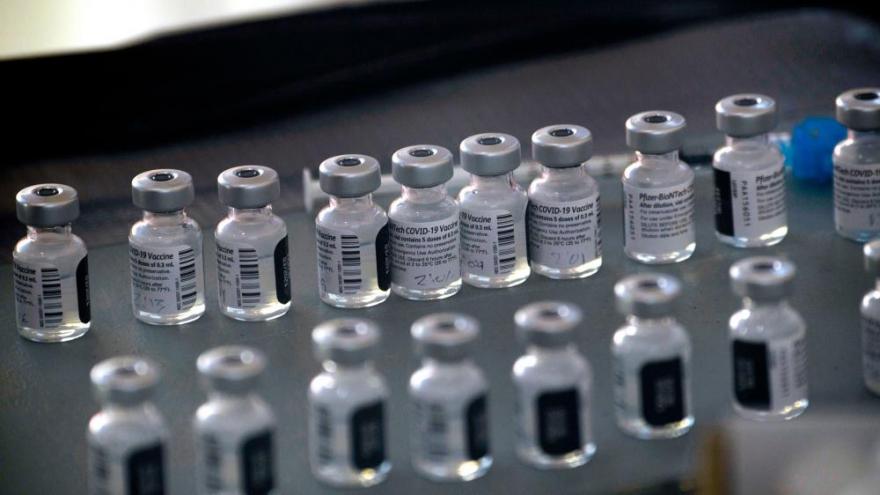 Jails and prisons were hit hard by Covid-19 and experts say they need to be prioritized for the vaccines. Vials of the Pfizer-BioNTech Covid-19 vaccine are seen in December 2020.

(CNN) -- Yesenia Lara spoke to her uncle on the phone nearly every day until May 1. Raul Rodriguez, 61, who was in a Texas county jail after a DUI conviction, had struggled with alcoholism but was a loving man who was "outgoing, always laughing," she said.

He told her there were about 15 to 20 other inmates in his cell and that they cut up shirts to use as face masks. He mentioned his throat hurt.

And then she didn't hear from him again. A little more than two weeks after their last conversation, she said authorities notified her family he had died of Covid-19.

"My uncle was a strong man," Lara said. "He still had life in him. And I feel like that was just taken from him."

There have been more than 330,000 cases among prison inmates, according to the Covid Prison Project, which tracks Covid-19 across the nation's correctional facilities, and more than 1,900 deaths. Thousands more cases have been detected across the nation's jails, where experts say Covid-19 data is scarce and hard to track. And it's not just inmates: More than 77,000 prison staff tested positive and more than 110 have died, according to the project.

"If we just purely look at the epidemiology of Covid-19 where the outbreaks have been, it's really hard to ignore jails and prisons," says Lauren Brinkley-Rubinstein, an assistant professor of social medicine at the University of North Carolina at Chapel Hill and co-founder of the project. "They've really been the epicenter in many ways."

As the pandemic enters a new chapter, with two authorized Covid-19 vaccines on the US market, leading public health professionals have called for incarcerated people and corrections staff to be prioritized in vaccinations. It's the nation's moral responsibility, several experts told CNN, but also a move that will help in the recovery of other communities.

"Prisons and jails are not a place apart, they're very connected to the communities that they're in," Brinkley-Rubinstein said. "We have staff and people who are released from jail and prison, moving out of the correctional space into their home communities. And if you have exposure in prisons or jails, then you're likely to bring that exposure into the surrounding community."

In its vaccine-allocation recommendations, the CDC's advisory committee listed corrections officers in Phase 1b, alongside other groups the agency deemed frontline essential workers. And while incarcerated populations aren't explicitly mentioned in any of the phases, the group said jurisdictions may choose to vaccinate them at the same time as staff.

But weeks into vaccinations across the US, state leaders have offered few details on the vaccination of corrections facilities -- and their prioritization differs vastly across the country.

Many worry that -- amid an already slow vaccine rollout -- hard-hit jails and prisons, and those who live and work inside, will again be left behind.

Since the pandemic's start, jails and prisons have served as petri dishes for the virus.

The Covid-19 case rate reported in state and federal prisons was more than four times the rate of cases in the general population, according to a September report presented to the National Commission on Covid-19 and Criminal Justice. The death rate was double the rate of the general population, the commission said in December. In Texas alone, the University of Texas at Austin in November found there had been more than 230 Covid-19 deaths in the state's correctional facilities, including both staff and incarcerated people.

"If you look at the housing areas -- cells, for example -- there may be a 45-foot square foot cell with two people in it. You can't socially distance in a cell that size," Michele Deitch, the study's lead author, previously told CNN. "It's an open toilet next to the bunk bed. All of the things that you want to do to take precautions in the outside world, you can't do there."

But that's not all. While jails and prisons struggled with proper isolation protocols, many did not provide adequate personal protective equipment, the commission's report said, and testing and contact-tracing strategies varied by area.

"The conditions inside are abhorrent," said Rena Karefa-Johnson, director of campaigns and advocacy at the Essie Justice Group. "Incarcerated people should have the same access to the vaccine, level of care and timeliness as people outside."

Protective gear wasn't sufficient for staff either and it's often "still a fight" to get some, said Jeff Ormsby, executive director for AFSCME Texas Corrections Union.

"We're hearing issues all the time of officers having to wear the same mask for 10 to 15 days," he said. "Being sent into quarantine units without the proper gear."

Sharon Dolovich, a professor of law at the University of California, Los Angeles and the director of the Covid-19 Behind Bars Data Project says, jails and prisons -- like other congregate settings, including nursing homes -- continue to be hotspots for the virus.

"All the arguments that anybody would offer for prioritizing people who live in long-term care facilities also apply to prisons," she said. "It's mystifying to me why there would be any distinction at all."

Many other health professionals agree.

More than 480 health experts signed an open letter last month urging the CDC advisory group and state leaders to prioritize incarcerated populations and corrections staff for vaccinations. A report from the Johns Hopkins Center for Health Security also called for their prioritization, recommending both groups be placed in an equal tier as other high-risk congregate settings, such as nursing homes. The same call was made by the American Medical Association in November.

"It's not just people who have committed severe crimes against society, violent crimes that are affected here. It's also people who are incarcerated for having late fees and fines and for minor drug charges," said Crystal Watson, a senior scholar at the Johns Hopkins Center for Health Security. "We have a responsibility to ensure that their health is protected, just like we do for the rest of the population."

And prioritizing jails and prisons would also mean helping the nation recover more quickly from the pandemic, experts say.

"If we have a limited supply initially of the vaccine, we're trying to get the biggest bang for our buck," Dolovich said. "As a public health matter, it seems like a no-brainer that we would include incarcerated people and corrections staff in the highest priority distribution."

The ripple effects that jails and prisons can have on surrounding communities have been documented for months. A study published in August found inmates coming in and out of Chicago's Cook County Jail appeared to have carried Covid-19 with them -- and researchers at the time said the jail may have been linked with about 15.7% of all documented cases in the state. In Ohio, a local newspaper reported on Marion County health officials' warnings that a massive outbreak at a local prison had seeped into the surrounding community.

"If you really care about what's spreading in your community, you have to care about what's going on in the jails," said Krish Gundu, co-founder and executive director of the grassroots advocacy group Texas Jail Project. "That's exactly where this virus is going to be kept alive."

Staff, she added, coming in and out facilities and then mingling with their home communities, have been "super vectors" for the virus.

Some officials say they have heeded experts' recommendations.

Kansas Gov. Laura Kelly late last month told The Topeka Capital-Journal she would take action "based on the science and what we know works," telling the newspaper she thought prison inmates should get vaccinated before the general population.

On January 7, the governor announced the state's final vaccination distribution order, placing people who live and work in corrections facilities in the second of five phases.

Meanwhile, Colorado Gov. Jared Polis said last month, "There's no way that prisoners are going to get it before members of a vulnerable population.

"As we do 65 (years) and up, I would think that would include prisoners that are in that category," he said. "There's no way it's going to go to prisoners before it goes to people who haven't committed any crime."

In Texas, where neither corrections staff nor inmates are explicitly mentioned in the vaccination plan, a corrections department spokesman said they've received more than 4,600 doses -- all of which will go to healthcare staffers.

"What I would like to ask the state legislators, US Congressmen, US senators, and everybody else that has anything to do with this vaccine," said Ormsby, with the corrections officers union, "Would they send their family members to work in a prison without it?"

Even though CDC's recommendations haven't placed incarcerated populations under a specific phase, Dolovich says that shouldn't mean those populations aren't included in the age groups they fall under.

"We should be saying, 'These are the highest-risk groups, these are the national priorities, and it should be irrelevant where you live, whether you are going to get the vaccine,'" she added.