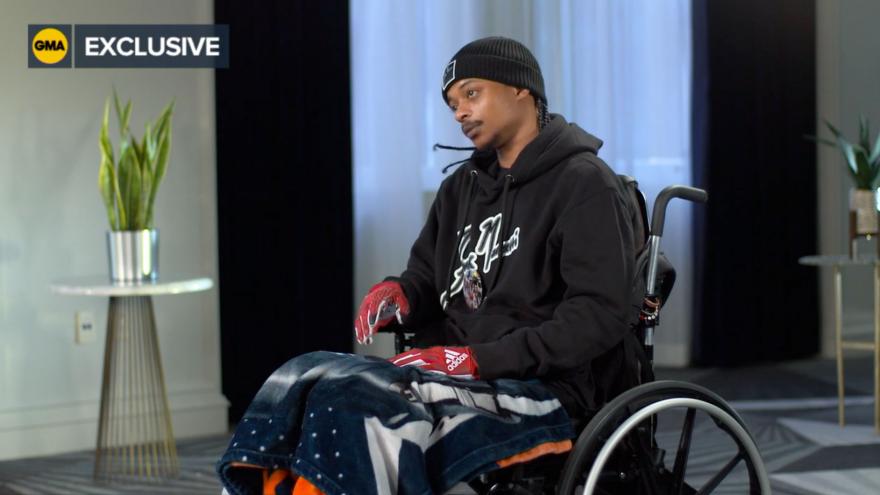 (CNN) -- In his first interview on national television, Jacob Blake said he "wasn't thinking clearly" when he picked up a knife that he had dropped during an encounter with police, moments before a Kenosha, Wisconsin, officer shot him seven times last summer.

Blake talked about the Aug. 23 shooting that left him paralyzed from the waist down in a portion of an interview that aired Thursday on "Good Morning America."

"I was like, 'He's shooting me,' " saidBlake, a 29-year-old Black man. "I couldn't believe it, so I kind of sat down in the car ... put my hands up, because I didn't want him to shoot me in my face or in my head or nothing. He just kept shooting, kept shooting.

"My babies are right here, my babies. So after he stopped shooting me, I said, 'Daddy love you, no matter what,'" he said. "I thought it was going to be the last thing I say to them. Thank God it wasn't."

The shooting, caught on video, fueled protests this past summer over racial injustice and police brutality initially sparked by the death of George Floyd at the hands of Minneapolis police.

That Sheskey and two other officers were on a domestic disturbance call was "urgently important," Graveley wrote in his investigative report on the shooting. Police also had a warrant for Blake's arrest from a prior domestic incident, Graveley said.

Blake's attorneys maintain their client did not pose a threat to police and the decision to not charge the officer fueled the community's longstanding distrust of the justice system.

Incident began with a call to police

Blake said he was attempting to leave his son's birthday party with his kids after an argument broke out between Laquisha Booker, the mother of three of his children, and a neighbor.

"I wanted to leave. My son is inside, tears coming out of his eyes and he said, 'Daddy, you sure? It's my birthday.'" Blake told ABC. "I'm taking them to the store again, make them forget about all this."

As he got ready to leave, Booker called police, telling a dispatcher he had taken the keys to an SUV she rented and she was afraid he would crash it.

According to the investigative report, Booker said Blake was "not supposed to be here," but she'd allowed him a couple hours to spend with his son on his birthday.

When police arrived, Blake said they did not explain why they were there and did not say they had a warrant for his arrest -- a statement disputed by the officers' statement to investigators.

"At that time I'm walking out," he said. "I hadn't done anything, so I didn't feel like they were there for me."

Blake says he shouldn't have picked up knife

Blake had just put one of his sons in the SUV when he felt one of the officers grab his arm.

A physical altercation broke out between Blake and the officers, who have said they believed he was reaching for a weapon. Blake told investigators he had a knife that dropped to the ground when Sheskey first grabbed him, but denied he was going to use it as a weapon against the officers. Sheskey discharged his Taser, but Blake broke the wires with his hand.

Blakepicked up the knife and began to walk toward the driver's door of the SUV, away from the officers.

"I shouldn't have picked it up," he said, adding, "I wasn't thinking clearly." Blake said he intended to put the knife in the SUV and then lay on the ground to submit to the police officers.

"If they did it there and they killed me there, everybody would see it."

Blake told ABC he "couldn't hear" the officers telling him to stop. "All I heard was screaming, screaming. My ears was ringing, so it was all muffled."

In video captured from a second-floor apartment across the street, Blake is seen walking around the front of the SUV with a knife in his hand. The officers have their guns drawn, and a male voice is heard yelling, "Drop the knife!"

Moments later, after the officer grabbed Blake's shirt, seven shots are heard. Blake had four entrance wounds to the back, and three to his left side.

"Officer Sheskey was presented with a difficult and dangerous situation and he acted appropriately and in accordance with his training," Kenosha Professional Police Association attorney Brendan Matthews said in a statement last week.

"The video remains difficult to view but that does not change what actually occurred. False and misleading narratives to the contrary need to stop. Kenosha can and will move forward from this. That process begins now."

Blake family attorneys in a statement last week expressed disappointment in the decision not to charge Sheskey, saying the decision "failed not only Jacob and his family, but the community that protested and demanded justice."

"If you're a Black person in America, and you're not perfect, then they say, 'Oh it was justified,'" he said. "It's like our children have to be angels."

According to ABC, Blake is going to physical rehab four days a week and is preparing for his 37th surgery since the shooting.

As for his children who witnessed the shooting, Blake said he's explained, "Daddy can die, but for some reason I didn't that day."