Jacob Blake is handcuffed to his hospital bed, family says 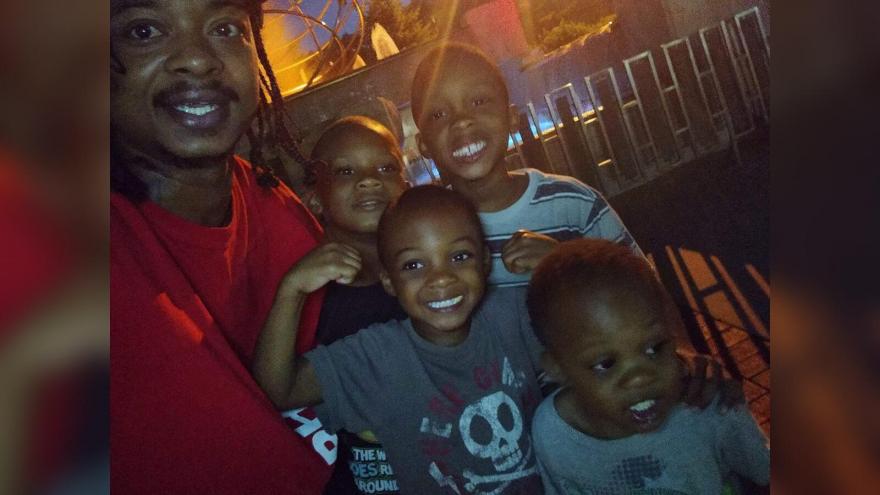 A photo of Jacob Blake and his sons that was shared on Twitter by the family attorney.

(CNN) -- Jacob Blake, who remains hospitalized after sustaining multiple injuries, is now handcuffed to his bed, his family said.

Blake's uncle told CNN on Thursday that Blake's father visited the Wauwatosa, Wisconsin hospital where his son is recovering from at least one surgery. He was "heartbroken" to see that his son was handcuffed.

"This is an insult to injury," Justin Blake, the uncle of the victim, said. "He is paralyzed and can't walk and they have him cuffed to the bed. Why?"

Blake, a 29-year-old Black man, has spent several days in the hospital. A Kenosha police officer shot him seven times in the back on Sunday while trying to detain him, state investigators said.

Kenosha police and sheriff's department, as well as the district attorney's office, did not immediately respond to a request for comment. CNN has reached out to the Blake family's attorneys.

A spokesperson with the Froedtert Hospital, where Blake is being treated, deferred CNN's questions to the Wisconsin Department of Justice.

Andrew Yang, a former Democratic presidential candidate and CNN contributor, said Thursday that he spoke with Blake's father. He told Yang that he's glad to see that his son is awake, but is angry that he's restrained.

"His father actually used the words 'chains.' He said my son is chained up," Yang told CNN's Erin Burnett.

When speaking to his father for the first time since the shooting, Yang said that Blake asked why was he shot so many times.

"When asked what message I could share on his family's behalf, #JacobBlake Sr. said to me, 'Tell them my son is a human being,'" Yang tweeted about his conversation with Blake's father.

Wisconsin Gov. Tony Evers said in a news conference that he "couldn't imagine" why Blake was handcuffed.

"I would have no personal understanding why that would be necessary," Evers said, answering a reporter's question.

"I would hope that we would be able to find a more, a better way to help him ... in recovering. That seems counterintuitive. It seems to be bad medicine."

The shooting has spurred nightly protests, and a wildcat strike across the sports world. On Wednesday, the Wisconsin law enforcement officials leading the investigation finally offered their first version of events, leaving gaping holes in its timeline.

Local officials have not discussed many details about Blake's shooting but continue addressing the nightly protests in Kenosha, especially after two people at a protest were killed and a third was seriously injured this week.

A 17-year-old was arrested Wednesday and is facing multiple charges murder charges involving several people for his alleged role in a shooting incident, authorities said.

On Thursday afternoon, an all-White group of local officials held a press conference to praise peaceful protesters and discuss the law enforcement response to prevent rioting in the city.

"Last night was very peaceful," Kenosha County Sheriff David Beth said. "Tuesday night -- not quite so peaceful, but it wasn't too bad. Monday night was our big night. Hopefully, we're over that hump of what we have to face."

What the police say occurred

Sunday's incident began when a woman called police saying "her boyfriend was present and was not supposed to be on the premises," the Wisconsin Department of Justice Division of Criminal Investigation said.

In a police call, a dispatcher names Blake and says he "isn't supposed to be there" and that he took the complainant's keys and refused to leave. The dispatcher later explains she doesn't have more details because the caller was "uncooperative."

Police said that about five minutes after the initial report, a dispatcher received reports of shots fired.

Officers had attempted to arrest Blake and used a Taser in a failed attempt to stop him, the DCI said. Blake walked around his vehicle, "opened the driver's side door, and leaned forward," the agency said.

Kenosha Officer Rusten Sheskey, who has been with the department for seven years, then fired seven times into Blake's back, the agency said. No other officer fired their weapon.

The agency said Blake admitted he had a knife in his possession, and law enforcement agents said they recovered a knife from the driver's side floorboard of Blake's vehicle.

State investigators did not indicate why police moved to arrest Blake, whether he brandished or threatened to use the knife, or why Sheskey shot so many times into Blake's back, and it does not mention his children in the vehicle or other family members standing just feet away.

Authorities said Sheskey and another officer have been placed on administrative leave. The other officers involved in the shooting will be identified soon, according to the state's attorney general.

Police rendered aid to Blake and he was flown to a Milwaukee hospital, police said.

Videos of the incident show a struggle between Blake and police, and Blake then walks around the front of an SUV and tries to enter the driver's side door. An officer is seen pulling Blake's tank top and seven shots are heard.

Blake's three children were in the vehicle at the time, attorney Ben Crump has said.

Earlier Wednesday, a family attorney told CNN that Blake did not have a weapon in the car.

"I can't speak directly to what he owned but what I can say is that his three children were in the car," Patrick Salvi Jr. told CNN. "That was on the forefront of his mind. That is the most important thing to him in his life -- his family and his children."

Blake's family said the shooting would likely leave him paralyzed from the waist down. They are focusing on Blake's recovery, which they expect to be slow, while demanding justice for him.

Blake's uncle said they are hopeful he may have "a great recovery."

"(His recovery) is going to be slow, it's going to be progressive, but he's a young man and he's resilient," Justin Blake said on Wednesday. "He has every chance, as anybody else, to turn things around."