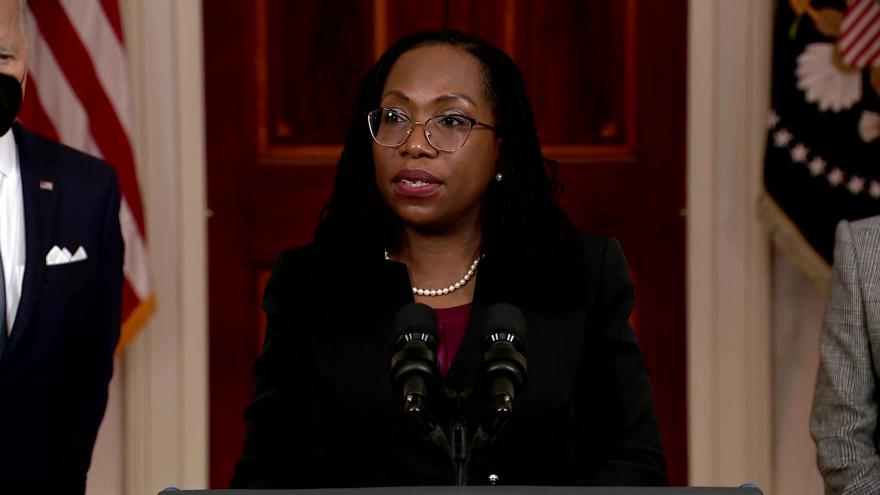 (CNN) -- The legal stakes around Judge Ketanji Brown Jackson's confirmation may be lower than they have been in the past decade of Supreme Court fights. But that did little to defuse the partisan atmosphere that has now come to define nominations to America's highest bench.

Jackson's final vote on the Senate floor later this week will be among the closest in Supreme Court history, even if her confirmation was never truly in doubt. Much of the committee proceedings around her nomination were focused on the fights around prior nominees and which party should be blamed for politicizing the Supreme Court confirmation process.

In announcing her support of Jackson, Alaska GOP Sen. Lisa Murkowski said explicitly that in addition to being satisfied on Jackson's individual credentials, she wanted to reject the "corrosive politicization of the review process for Supreme Court nominees, which, on both sides of the aisle, is growing worse and more detached from reality by the year."

"While I have not and will not agree with all of Judge Jackson's decisions and opinions, her approach to cases is carefully considered and is generally well-reasoned," Murkowski said.

She would later tell CNN of the Judiciary Committee hearings, "I think there was a level of personal attack that was unwarranted."

That assessment was a far cry from how most other Republicans have panted Jackson's nomination, even as they have praised what Jackson -- who will be the first Black woman justice -- has accomplished in her legal ascent.

Delaware Democratic Sen. Chris Coons would later say: "She is not a radical liberal activist judge and I don't think any of us should be making proclamations about what we are certain she would do to the trajectory of American law."

With three Republican expected votes in Jackson's favor, President Joe Biden's nominee will have fewer votes from the party that opposes him than than the nine and five respective GOP votes received by Obama Justices Sonia Sotomayor and Elena Kagan. Jackson's GOP support, however, will be greater than what Democrats lent Justices Amy Coney Barrett and Brett Kavanaugh -- the former receiving no Democratic votes and the latter only one.

When conservative Justice Antonin Scalia and liberal Ruth Bader Ginsburg were confirmed a generation ago, they received little opposition in the Senate, even as their ideological leanings were well known.

On Monday, however, Sen. Lindsey Graham asserted a Republican-controlled Senate would not have even held a hearing for Jackson, who received bipartisan support in past confirmations and has been endorsed now by many prominent conservative lawyers and ex-judges.

"If we're in charge she would not have been before this committee," Graham, a South Carolina Republican, said. "You would have somebody more moderate than this."

The delayed arrival of Democratic Sen. Alex Padilla due to travel issues was another reminder of how perilous the path is for a Democratic nominee in a 50-50 Senate. The committee waited for three hours for his return before deadlocking on approving her nomination.

A postponement of a few hours did not knock Democrats off their plans to confirm Jackson by the Senate's Easter break. But there were other episodes in the last year showcasing the razor-thin edge Biden has in his ability to put a new justice on the Supreme Court.

A stint Vermont Democratic Sen. Patrick Leahy did in the hospital at the beginning of the Biden administration emboldened calls on the left that Breyer not put off his retirement until it was too late to guarantee Biden could confirm his replacement. After Breyer announced in January his plans to depart after this term, Sen. Ben Ray Lujan, a Democrat from New Mexico, suffered a stroke that kept him away from the Senate chamber for a month.

Maine Sen. Susan Collins, one of the other Republicans supporting Jackson, called the Senate confirmation process broken, in part because move away in recent years from judging nominees on their "experience, qualifications, and integrity."

The third GOP senator who will vote in Jackson's favor this week had, unlike Murkowski and Collins, opposed Jackson when she was nominated last year to the US DC Circuit Court of Appeals.

"While I do not expect to agree with every decision she may make on the Court, I believe that she more than meets the standard of excellence and integrity," Utah Republican Sen. Mitt Romney said Monday.

Republicans and Democrats don't disagree that the Supreme Court confirmation process is not what it once was. But who's to blame for it going off the rails was a frequent point of contention through Jackson's nomination proceedings, including at Monday's vote.

"It's clear that there are some hurt feelings, some, some grudges that members of the committee may be nursing, and I understand that," said Sen. Jon Ossoff, a Georgia Democrat who was only elected last year.

As Jackson moved through the process, Republicans brought up repeatedly not just the recent Senate fights around confirming Barrett and Kavanaugh, but how Democrats approached judicial nominations decades ago -- dating back to the 1987 Supreme Court nomination of Robert Bork, whose confirmation was narrowly defeated in a bipartisan Senate vote.

Republicans claimed that, by framing their opposition around Jackson's legal approach, they were merely judging her by the standard set by Democrats who opposed judicial nominees based on their views on the law.

"If the questions were hard it is because her record is at the extreme," Cruz said Monday -- an assertion rebuked by the senator's legal mentor, Michael Luttig, a conservative former appellate judge who has endorsed Jackson.

Republicans also pointed to an appellate nomination battle from the 2000s to claim that Democrats had gotten in the way of a Black woman making Supreme Court history in the past.

For Democrats, however, it was Republicans' treatment of Attorney General Merrick Garland -- when he was nominated for the Supreme Court by then-President Barack Obama in 2016 -- that truly changed the game.

New Jersey Sen. Cory Booker called out not just the "ridiculousness" of Garland's nomination not getting a hearing in the Republican controlled Senate, but how some Republicans at the time were vowing to continue to block any nominee of Hillary Clinton if she was elected President that year.

What sets Jackson apart from the Garland and Bork fights -- and the battles around Kavanaugh and Barrett for that matter -- is that she is not expected to meaningfully shift the tilt of the court. Once she is confirmed, the swing votes will still be Kavanaugh and Barrett, who both have voted mostly with the other conservatives since they became the pivotal votes on the court.