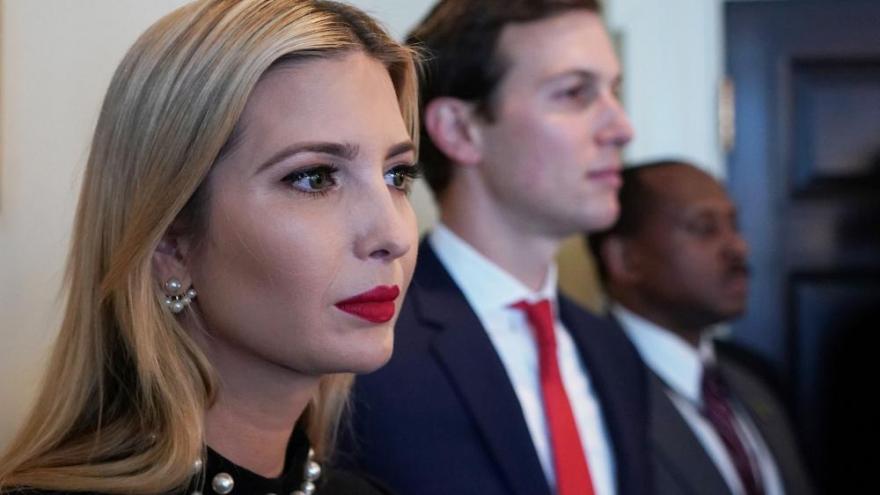 Ivanka Trump and Jared Kushner to head south as she explores political future.

(CNN) -- Ivanka Trump and Jared Kushner are currently in the final stages of purchasing a plot of land in an exclusive enclave nicknamed "billionaire bunker," near Miami Beach, Florida, according to a source familiar with the transaction.

The lot, which is just shy of two acres and sits on Biscayne Bay, was listed at $31.8 million and the couple offered somewhere in the range of $28-30 million, the source said. The sale is pending under contract, meaning the buyer's offer has been accepted by the seller, who happens to be legendary Spanish crooner Julio Iglesias.

A spokesperson for Trump declined CNN's request for comment on the transaction.

The dollar amount is stunning, but comparable to the other 29 estates and 11 lots that make up Indian Creek Island, an ultra-private "village," as one local real estate expert describes area.

"(Indian Creek Island) is one of Miami's most private and sought after neighborhoods, frequented by high net-worth individuals seeking privacy," said Dora Puig, who has during her career sold more than $3 billion worth of real estate and is the owner of a luxury boutique brokerage in the area. (Puig was not involved in the sale or purchase of the Trump-Kushner transaction.)

Puig said the extreme security measures at Indian Creek enjoyed by residents is one of the main reasons wealthy people are willing to pay into the tens of millions for a piece of land and views of the water surrounding it, waters monitored around the clock by armed private security.

"The security gate at the entrance and 24/7 patrol serves as a way to ensure only homeowners, their guests, and members enter the island. This is a crucial reason that celebrities such as Julio Iglesias, Adriana Lima, Carl Icahn, Jeffrey Soffer, Eddie Lampert and Peter Breton -- amongst many others -- have lived there," she said.

As daughter and as an adviser of President Donald Trump for the last four years, Ivanka Trump can no longer live in obscurity, not that she did pre-White House, but her profile has now raised exponentially. She and Kushner, also a senior Trump adviser, have three young children.

It's not just the safety that drew Trump to Florida, it is the potential political opportunities of the state itself, said a source who has been working with the Trump family.

Trump has not ruled out a near-future run for office, nor has she publicly denied she has political ambitions of her own. Florida, which President Donald Trump won in 2016 and 2020, provides a potential opportunity for Ivanka Trump, should she choose to enter politics.

"Ivanka definitely has political ambitions, no question about it," the source told CNN. "She wants to run for something, but that still needs to be figured out."

Putting down roots in Florida is certainly a first step.

"Assuming she's not interested in a low-profile political office, that would leave the United States Senate as a possibility," said Adam C. Smith, former Tampa Bay Times political editor and now consultant with Mercury Public Affairs. "Marco Rubio is up for reelection in 2022 and is expected to run again. But I wouldn't think Rubio would deter her if she wanted to run. The last time Marco Rubio ran against a Trump in Florida, in the 2016 presidential primary, Rubio was crushed by 19 percentage points."

Trump had a taste of what the state might hold for her politically during her many campaign stops there earlier this fall to stump for her father; she visited Florida multiple times in the run-up to the presidential election, drawing capacity audiences at events as well as raising millions of dollars at fundraisers.

In late October, Trump introduced her father at a "Make America Great Again" rally there, but interestingly tacked on solo stops for herself before and after the main event, watching a dance troupe perform at a school and sipping Cuban coffee at a popular local restaurant. Smith said Florida could have a walk-on advantage for Trump, with an entry paved by the President.

"Normally, you'd expect a credible candidate for US Senate to spend years building a political and financial network, but those normal rules would not apply to Ivanka," he said. "I think she'd be the immediate frontrunner if she ran for US Senate against Rubio, given her father's popularity in the Sunshine State."

Although the President lost Miami-Dade County, which typically favors Democrats, he did so by a smaller-than-expected margin over Joe Biden, whose draw there was less than Hillary Clinton's in 2016.

If she's eyeing the governor's mansion, Ivanka Trump would have to wait seven years, the amount of time required by Florida's constitution for a resident to live there before taking the office.

"There's no gray area with that," said Smith, adding no matter the race, a Trump on the ticket would heat up state politics. "She'd also be a gift to the Democratic nominee, who would be guaranteed to receive vast financial support to beat her."

A source close to Trump cautioned against reading too much into the house purchase and chatter about her political ambitions and said that she and Kushner had been looking for a new Florida home for a while.

Mar-a-Lago, which is about an hour's drive from Indian Creek, is not a viable option for the Trump-Kushner's to set permanent roots, mainly because it is a club with paying members and very little in the way of privacy -- perfect environs for her attention-loving father. The source said the Miami purchase is not taking the place of the penthouse the couple own in a Trump-owned building on Manhattan's Park Avenue, nor the vacation home they occupy at Trump's golf club in Bedminster, New Jersey, which is currently undergoing a substantial expansion.

But a multimillion-dollar mansion on a multimillion plot of land most certainly belies an investment in a Floridian future. If the Senate isn't in the plan, Trump could run for a far more local office. Indian Creek Island does have its own city hall and mayor.