'It's too soon for it': Small business owners react to Texas dropping mask mandate 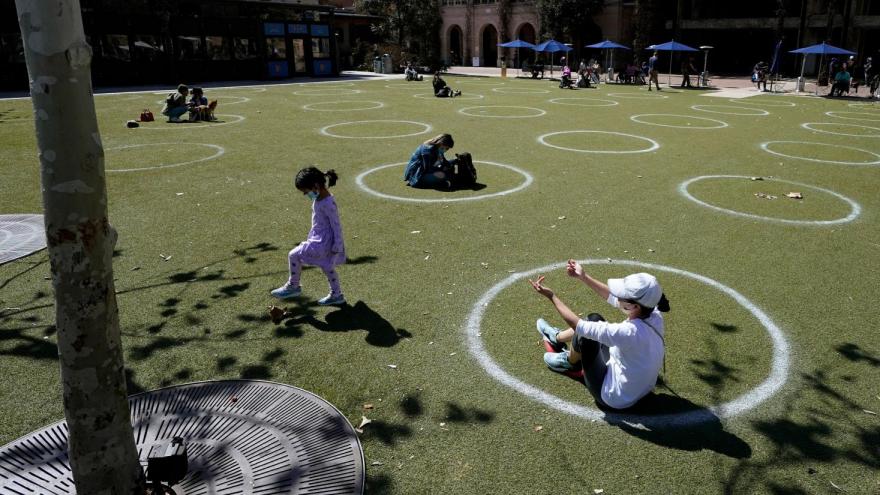 Gov. Abbott on Tuesday issued an executive order dropping the mask mandate and allowing businesses to reopen at 100% capacity beginning next Wednesday. Visitors to the Pearl Brewery are shown using circles marked for social distancing to help battle the Covid-19 virus, Wednesday, March 3, 2021, in San Antonio.

(CNN) -- When Humbelina Gonzales heard Texas Gov. Greg Abbott was lifting the state's mask mandate next week, her first reaction was, "It's too soon for it."

Gonzales, who volunteers at a thrift store called Trash & Treasure in Alice, Texas, about 45 miles west of Corpus Christi, said she intended to follow guidance by the US Centers for Disease Control and continue to wear a mask.

The same will go for patrons in the store, she said.

Gov. Abbott on Tuesday issued an executive order dropping the mask mandate and allowing businesses to reopen at 100% capacity beginning next Wednesday, citing the "recoveries, vaccinations, reduced hospitalizations and safe practices" Texans have used to drive down Covid-19 numbers.

But the decision has been widely condemned by public health experts, who say it's too early to loosen restrictions. And even with the US vaccine rollout picking up speed, concerns remain over Covid-19 variants, some of which appear to be more transmissible.

Now Texas business owners are trying to figure out what Abbott's order means for them and whether they're going to continue requiring masks in their stores and restaurants, risking the ire of customers who disagree.

"What he's done is he's put the burden on the business now, and that's going to create conflict at some point," said San Antonio restaurant owner Mike Nguyen, describing the governor as someone who avoids taking responsibility.

As an Asian American, Nguyen is worried about potential clashes with customers who refuse to wear a mask in his business, particularly in light of a recent string of violent attacks against Asian Americans across the country.

"I'm nervous and my anxiety has been at an all-time high," he said. "I'm trying to hope for the best, but there's so many things that could go wrong."

Abbott's not the only governor loosening restrictions. Mississippi Gov. Tate Reeves made a similar announcement Tuesday, ending county mask mandates and allowing businesses to open at 100% capacity. On Thursday Gov. Kay Ivey of Alabama said she would extend the state's mask mandate until April 9, but would not go beyond that, calling it a "step too far in government overreach."

"It just is inexplicable why you would want to pull back now," Fauci told CNN Wednesday. While he understands the desire to return to normality, Fauci said pushing aside Covid-19 guidelines will only set back progress against the pandemic.

"We know that these interventions work. It's very clear," he said. "When you implement them, you see the cases go down. When you pull back, the cases go up."

News of Abbott's order has reignited the divide in Texas over mask-wearing. Some business owners, like Missy Herring, the owner of Creating Printing & More in Three Rivers, Texas, welcome the change.

"I was tickled to death," Herring said of Abbott's announcement, adding she was "ready to get back to normal."

Herring doesn't usually wear a mask herself, claiming it exacerbates her existing health conditions. She never forced customers to wear masks in her store, either, saying, "If you want to wear it, you wear it. If you don't want to wear it, don't wear it."

She did wear masks into stores that required it, "but the minute I walked out, I took my mask off," she said. Now, with Abbott's order set to take effect, she says she won't have to wear a mask in stores if she doesn't want to.

And if a business asks her to?

"They don't need my money," Herring said. "I can find another store."

A spokesperson for Abbott said in a statement Wednesday the governor had been "clear in telling Texans that COVID hasn't ended, and that all Texans should follow medical advice and safe practices to continue containing COVID."

"The fact is, Texas now has the tools and knowledge to combat COVID while also allowing Texans and small businesses to make their own decisions," press secretary Renae Eze said, adding that "state mandates are no longer needed."

But without a mandate, chef Tiffany Derry said she feels like the state has left her to fend for herself.

Even with a mask rule in place, some customers have put up a fight. Now, "I don't have that protection of being able to say, you know, this is a rule," she said. "It leaves me feeling like we're alone."

Derry's restaurant group T2D owns two Roots Chicken Shak locations: One in a Plano, Texas, food hall, another at an H-E-B supermarket in Austin. Those locations mean that she doesn't have much control over rule enforcement as it is.

H-E-B, for example, never had a mask requirement for its customers, instead deferring to local and state ordinances. Now that the state will no longer require masks in public settings, H-E-B will follow that direction except in areas where masks are mandated by local officials.

Forcing businesses to take a stand -- either to enforce a rule that is no longer required by the state, or to allow people to skip the mask -- means they may alienate customers, Derry said, at a time when they desperately need business.

'We will take care of the customer'

Lifting the mask mandate at this point is "pretty reckless and hasty," said Sarah Heard, co-chef and co-owner of Foreign & Domestic, a farm-to-table restaurant in Austin. "It's terrifying, to be honest."

The restaurant will continue to require employees and customers to wear masks and social distance in the restaurant. But Heard fears that as other restaurants ease restrictions, establishments like hers will get "lumped in" with restaurants that aren't following Covid-19 safety protocols.

Heard's customers have been largely compliant with the restaurant's mask requirement so far. But without the state-wide mask mandate in place, she's concerned that some may flout the restaurant's rule.

Florencio "Smiley" Gonzales, who volunteers at Trash & Treasure with his wife, Humbelina Gonzales, said he understands where the governor's coming from -- that businesses are struggling amid the pandemic. But he said he's trying to protect not only himself but also the customers coming into the store, which funds a food pantry that feeds hundreds of people.

"Abbott is putting us in a spot, but we will take care of the customer," he said. "That's our goal."

"But what does taking away the mask mandate have to do with anything about reopening Texas?" he asked.