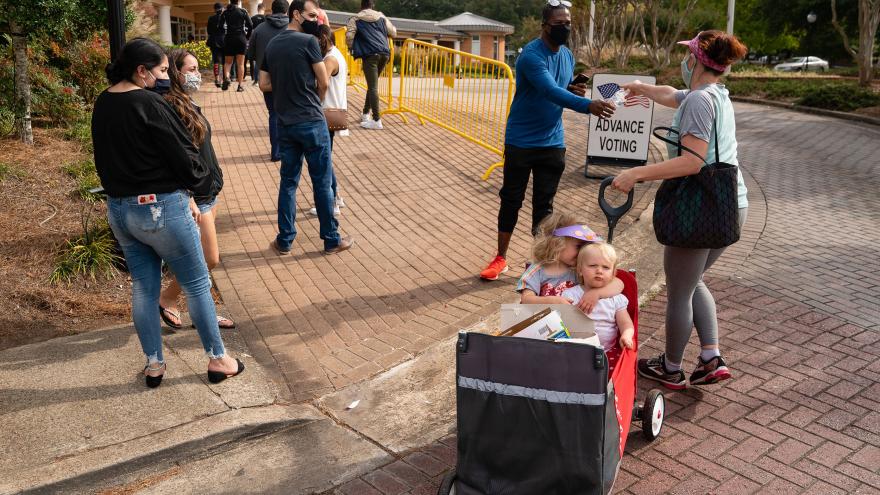 It is now now illegal to hand out food or water to people standing in line to vote in Georgia. Megan Dominy, in this image, offers water and snacks to voters at an early voting location on October 24, 2020, in Smyrna, Georgia.

(CNN) -- Georgia's new sweeping elections law has a number of controversial provisions that will restrict access to voting.

But one in particular has some people shaking their heads.

Under the bill, signed into law Thursday night by Republican Gov. Brian Kemp, it's now illegal to hand out food or water to people standing in line to vote.

"No person shall solicit votes in any manner or by any means or method, nor shall any person distribute or display any campaign material, nor shall any person give, offer to give, or participate in the giving of any money or gifts, including, but not limited to, food and drink, to an elector," the new law states.

But some observers see the provision as an attempt to curb voting by urban voters and people of color who lean Democratic and whose precincts often have long waits to cast ballots.

One influential Black pastor said he thinks the new law is unreasonable and that his church will use it to fire up voters.

"We will make a movement out of that," said the Rev. Tim McDonald, senior pastor of First Iconium Baptist Church in Atlanta. "You know something is wrong when you can't give grandma a bottle of water and a peanut butter and jelly sandwich."

McDonald told CNN he is already planning to test the law with some civil disobedience. He said that at a future election his church will dare the police to arrest someone giving water to an elderly person waiting to vote.

Attorney Walter Shaub, former director of the US Office of Government Ethics, also has criticized the measure as an attempt to target voters of color.

"Georgia's bill would make it a crime to give free food or water to voters standing in line for hours and hours. But we know who these politicians force to stand in line all day long," Shaub said earlier this month on Twitter. "I've never once stood in line for even five minutes where I get to vote. This racism is thorough."

Republicans have defended the measure, dubbed Election Integrity Act of 2021, saying it's required to boost confidence in voting after last year's election. Kemp said the law will "ensure elections in Georgia are secure, fair, and accessible."

Georgia's bill is part of a broad effort by GOP-led legislatures across the country to pass restrictive voting measures in battleground states such as Arizona, Michigan and Florida.

Georgia Secretary of State Brad Raffensperger, a Republican, vowed last December -- a week before the state's runoff election -- that the state would crack down on "line warming," or handing gifts to voters in line as a way to "inappropriately influence voters in the crucial final moments before they cast their ballots."