It's not just your imagination. Drivers in the pandemic have gotten more reckless 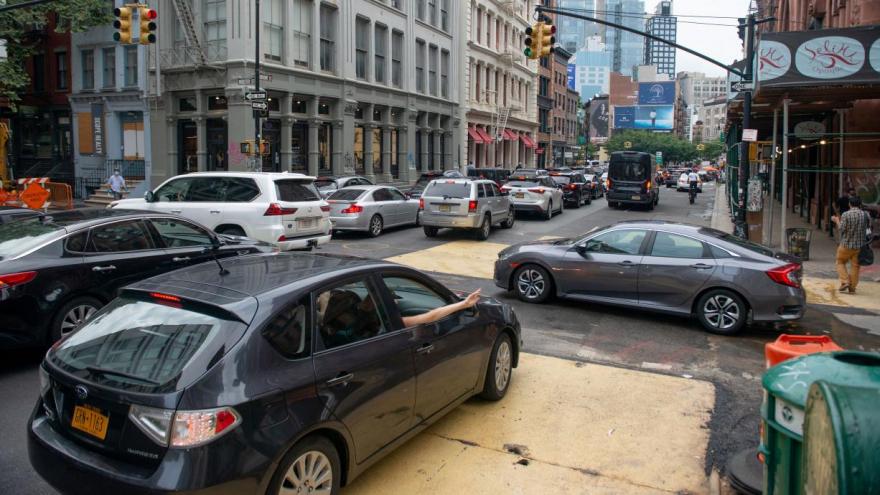 Cars crowd an intersection in the SoHo neighborhood of New York City on August 07, 2020.

(CNN) -- When the coronavirus pandemic shut down the country last year, highways emptied out as many people holed up at home. But those who got behind the wheel engaged in riskier behavior, leading to the deadliest year for US traffic crashes in over a decade.

More motorists went too fast, failed to buckle up and drove under the influence of drugs and alcohol, according to law enforcement and traffic safety experts.

The outcome was grim. About 38,680 people died in vehicle crashes in the US last year -- the highest number since 2007, according to the National Highway Traffic Safety Administration. Fatalities also increased among motorcyclists, bicyclists and pedestrians, even as the number of miles driven nationwide dropped by 13.2% compared to 2019.

"It's mind-boggling and extremely frustrating to see the tremendous loss of life from Covid compounded by preventable traffic crashes," says Pam Shadel Fischer, a senior director for the Governors Highway Safety Association.

Experts have several theories for the rise in deadly crashes.

And based on preliminary data from the first three months of this year, 2021 has the potential to be even worse.

Motorists have been emboldened by emptier roads

The recent rise in deadly crashes has been seen in all regions of the country.

In New York state, more than 1,000 people died in motor vehicle crashes last year compared to 938 the year before, said Beau Duffy, a spokesperson for the state police. The percentage of crashes involving unsafe speed, alcohol or illegal drugs all rose in 2020 over 2019 levels, Duffy said.

Crashes in Colorado mirrored similar trends. Incidents of excessive speeding -- going 40 mph or more over the limit -- shot up by 48% last year over 2019, said Sgt. Blake White, a spokesperson for the Colorado State Patrol. The state also saw an increase in road rage, street racing incidents and other aggressive behaviors.

"During the height of the pandemic, many drivers stayed home and were discouraged from travel unless absolutely necessary," White said. "Some of the drivers on the road seemed to feel traffic laws no longer applied during the pandemic because of the decrease in commuter traffic volume."

As drivers have trickled back onto the highways, they've had to adjust to sharing space with others after a year of open roads. One result has been increased road rage, White said.

An analysis of state data projects that 6,721 pedestrians were killed on US roads last year, up 4.8% from 2019, according to the Governors Highway Safety Association.

"Even though there were fewer vehicles on the road last year, more people on foot were struck and killed by drivers," said Adam Snider, the GHSA's communications director.

When factoring in the decrease in vehicle miles traveled in 2020, the pedestrian fatality rate leaped 21% from 2019 -- the largest annual increase since the NHTSA began collecting and analyzing such data in 1975.

During the pandemic many officers shifted their efforts to help critical industries such as grocery stores during supply shortages, Colorado's White said. That meant a dip in traffic safety enforcement, he said.

As a result, many motorists put the pedal to the metal -- which led to more deaths.

"Increased speeds lead to more fatal and injury crashes," White said. "When speed increases, the severity of the crash is exponentially worse."

Many other large states, including California and Georgia, also reported increases in fatal crashes last year. In Georgia, while there were fewer crashes statewide, the number of fatalities rose last year due to speeding, said Lt. W. Mark Riley of the Georgia State Patrol.

"With the roadways being more open and more people increasing their speeds, the wrecks were more violent," he said. "It's always more riskier when people are driving faster."

Coffee said the CHP is working with other highway patrols and state police agencies on traffic safety campaigns that focus on enforcing safe speeds.

More fatal crashes have been tied to drugs and alcohol

Beyond speeding and careless driving, more people turned to alcohol to cope with the prolonged stress and uncertainty of the pandemic.

Research shows that several groups, including women and Americans over age 30, have been drinking more during the coronavirus pandemic.

Overall frequency of alcohol consumption went up by about 14% in 2020, while women increased their days of heavy drinking -- defined as four or more drinks on one occasion -- by 41% compared to the same months in 2019.

"We all had so much on our minds throughout 2020, making it even more difficult than usual for some drivers to focus on the road amid everything happening in the world around them," said Snider of the Governors Highway Safety Association.

"In addition, the pandemic likely exacerbated substance abuse issues for some individuals," he said.

Data compiled by the National Highway Traffic Safety Administration showed increased prevalence of drugs and alcohol among drivers killed or seriously injured in crashes during the pandemic.

"Getting drivers to slow down and obey the speed limit, buckle up every trip and always drive sober will be key to reversing these negative trends," Snider said.

But the early signs for 2021 are not encouraging.

Preliminary data show the US saw an estimated 9,420 traffic deaths during the first three months of 2021, according to the National Safety Council, a nonprofit safety advocate group. That's up 10% over the same period in 2020 and up 12% compared to 2019, the NSC says.