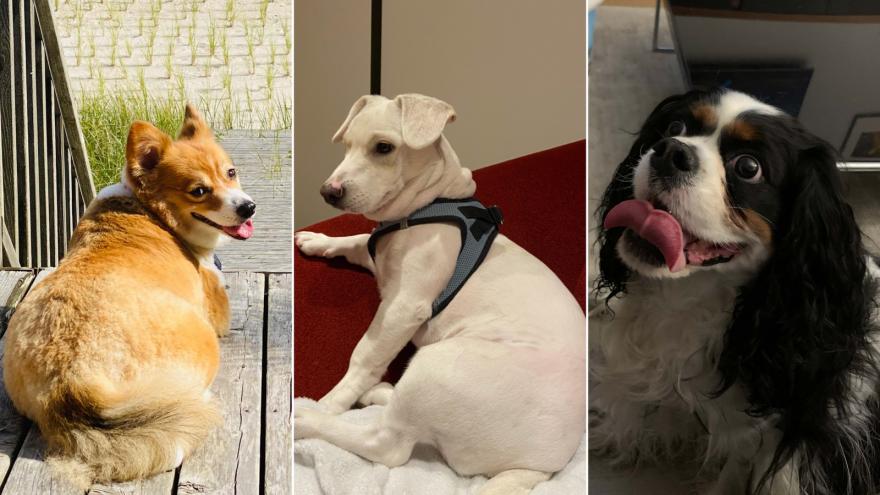 (CNN) -- Pets are often celebrated for matching their owner's mannerisms.

Walking at the same pace? A sign of good training. Cuddling and watching TV together? Adorable.

Stress-eating together because you're both home all day due to a harrowing pandemic? Less endearing-- and potentially dangerous.

Veterinarians across the US are noticing weight gain and higher levels of obesityin pets since the pandemic began, said Dr. Ernie Ward, veterinary food therapist and founder of the Association for Pet Obesity Prevention.

"We are seeing reports of more and more veterinarians saying, 'Look, we're seeing more weight gain this year than we saw in the prior year,'" he told CNN. "(The pandemic) is the perfect storm."

Restrictions on movement, coupled with more snacking at home, is likely leading to pet weight gain and obesity, Ward said.

Simon McDevitt, a New York corgi, is a living example of what more snacks and less walks can do to a dog's health.

His owner, Margaret McDevitt, told CNN that with more time spent at home, she has been prone to feed Simon from the couch.

"He is the ultimate lover of Smartfood popcorn," she said. "With us at home more, watching TV in the middle of the day ... he sees the bag and he'll just beg."

McDevitt said she's noticed about a two- or three-poundincreasesince March 2020 -- but that the number is hard to estimate because of the extra fluff he grows when his fur gets long.

Living in a small apartment, McDevitt said it's hard to get Simon enough exercise.

"During Covid, his long walks definitely became shorter," she said. "Wanting to limit exposure with other people on the street was one thing -- but also, they just weren't enjoyable anymore. Being around so many people, having to wear a mask ... it's just a different experience."

In pre-pandemic times, she said, it was easier for Simon to exercise at the dog park or another public space. But the pandemic has made those opportunities less safe, and now with colder weather, there are several barriers to sufficient exercise.

You're stressed and so are your pets

"When you are stressed or anxious, your brain secretes a whole cascade of neurochemicals that encourage you to eat," he said.

And pets pick up on this.

"Our pets tend to take on those emotional attributes, because they are highly empathetic," he said. "They are looking to us for emotional cues."

McDevitt said Simon has been stress-eating since the pandemic. After she was furloughed from her job in March and spent more time at home, she noticed he would eat his meals more quickly and beg for food more often.

"He's having a harder time when I leave the house," she said. "He had separation anxiety to begin with, so after being home so much, I started to notice that he was doing this as a coping mechanism."

She said she plans to get Simon down to a healthy weight.

"Now that spring is coming, I plan to lengthen his walks again," she said. "I just got a new job, so I'm trying to get him on an eating schedule for when I leave the house ... now that I'm not home as much, he'll definitely be laying off the (popcorn)."

Keeping the chonk in check

Pet owners should keep their pets' weight under control, despite how cute that extra fluff may be, Ward said.

It can also shorten a pet's life by over two years. A 2019 study found that the lifespan of overweight dogs was, on average, up to two-and-a-half years shorter than their canine peers at a healthy weight.

But Ward said that diseases related to excess weight are preventable.

"It's like we have a crystal ball," he said. "We know what's going to happen to your 18-pound cat in the future."

For pet parents that want to get their pet's weight under control, Ward said the first thing to do is assess the problem.

To check if their pet is overweight, owners can look at the animal's side profile to check for a lower hanging stomach. Or, they can look at their pet from the top -- if they have a blimp or balloon look, he said, that's a good indicator of being overweight.

Once pet owners understand their pet's weight, they can start to rewire some of those negative quarantine habits, like being over-sedentary or snacking excessively.

As always, taking pets to the veterinarian is a sure way to understand the risk a pet's weight is posing.

But Ward said that ultimately, pet owners shouldn't chase a number on a scale -- they should chase quality of life.

Simon has come a long way since his rescue in 2014, McDevitt said. She has worked hard to ease his anxiety and bolster his ability to trust -- and the two have formed a remarkably close bond in the process.

"He's my pandemic pal," she said. "We have to take care of each other."