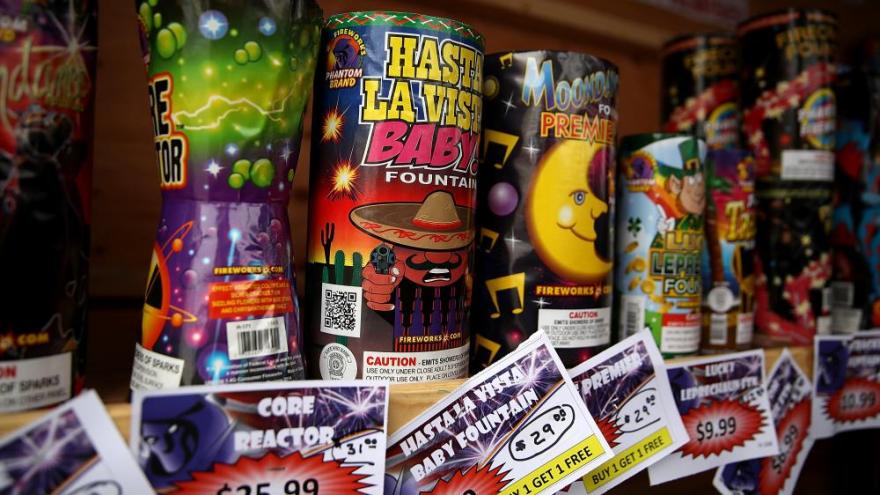 Fireworks complaints before July 4 aren't atypical in major cities, but they're coming extra early and extra frequently this year.

(CNN) -- The Fourth of July is still over a week away, but in many cities, it's already arrived. From New York to San Francisco, the skies light up every night -- and early morning -- for hours, and with no apparent reason.

Now, officials have had enough.

Firework complaints are soaring, and they come after months of pandemic-induced isolation followed by weeks of tense protests against police brutality and racism.

Why the fireworks are going off so frequently is anyone's guess. And city officials say they don't yet know where the big ones are coming from.

Conspiracies abound over who's responsible, but it's clear that the incessant fireworks displays are an inconvenient and dangerous phenomenon in an already surreal American moment.

Fireworks problems in the Northeast and West Coast

There seems to be no geographic pattern behind which cities are shooting off the most.

Boston Mayor Marty Walsh told reporters that calls to police about illegal fireworks jumped 2,300% in May compared to the same period in 2019. He said some of the calls were originally for gunshots that turned out to be fireworks.

"This is a serious issue," he said. "People are frightened. People are losing sleep. Babies and kids are woken up. Pets are terrified. Our veterans and others with PTSD are experiencing real harm, and it's a real fire hazard in our city."

California's Alameda County, near San Francisco, has received complaints about a "higher than normal use" of illegal fireworks, too, according to the Alameda County Sheriff's Department.

Southern California's staying up all night, too.

The city of Pasadena said firework complaints are up 400%, and Los Angeles County sheriff's deputies recently seized a truckload of illegal fireworks valued at $10,000, according to CNN affiliate KCBS.

New York's fireworks problem is among the worst, with residents in all five boroughs losing sleep for over a week.

Nuisance fireworks are not an entirely new issue for the city, Mayor Bill de Blasio said in a Tuesday news conference, but there are "more (fireworks) than we've seen" in years past, and they're being lit up earlier than usual.

"This is a real problem," de Blasio said. "Not just a quality of life problem and a noise problem, and it's certainly that. But it can also be dangerous."

In one example, footage shared by the NYPD's Sergeants Benevolent Association this week showed a man lighting a firework and throwing it at a homeless man in Brooklyn. The department has asked for the public's help in identifying the perpetrator.

NYPD Chief of Detectives Rodney Harrison said the firework exploded near the man and burned his back. CNN has reached out to the department to learn more about the man's condition.

And last weekend, fire officials said an apartment fire in Yonkers that left six families homeless might've been caused by fireworks, too, The Journal News of the Lower Hudson Valley reported.

De Blasio said the NYPD, along with the New York City Sheriff's Office and fire officials, will create an illegal fireworks task force to crack down on illegal fireworks sales in the city and surrounding states. Participating officers will conduct "sting operations" to locate the supply and cut it off, the mayor said.

In the past two months, New York 411 received at least 4,862 complaints of fireworks. Almost half of them were concentrated in Brooklyn, which received 2,233 complaints, according to the office of Brooklyn Borough President Eric Adams.

The light show is more than a nuisance keeping New Yorkers up all night -- the explosives are dangerous, too.

According to Adams' office, a Bronx teen was hit in the chest with a firework and hospitalized in stable condition, and a 33-year-old Brooklyn man was hospitalized in critical condition when a firework he set off ricocheted off a window and hit him.

Adams said he doesn't know how New Yorkers are accessing these fireworks -- fireworks of all kinds are banned from the city, and the state allows only sparklers. The fireworks he's seen more closely resemble display fireworks that are only available to licensed professionals, he said, similar to those used in the Macy's Fourth of July fireworks show.

"As I stroll around and look at some of these fireworks, they're extremely sophisticated, beyond the normal scope of what we used as children," Adams said. "This is definitely not just some firecracker."

Most of the Brooklynites he encounters tell him they set off the fireworks to blow off steam after being cooped up for most of the spring -- New York was for months considered the epicenter of the coronavirus pandemic.

"Some said they were in their home for a few months, and this is just their way of having fun," he said. "Oftentimes, people don't realize the dangers associated with it."

And of course, there are the conspiracies hinting at nefarious motives -- unproven allegations in the fog of a late-night M-80.

This year could see more 'backyard fireworks' than ever

Leaders in the fireworks industry expect the run-up to July 4 to end the lull in sales throughout the winter and early spring. But even they've never seen sales soar quite as early as they did this year.

And those are just the legal ones.

Backyard firework use is expected to hit an all-time high this Independence Day, according to the American Pyrotechnics Association, a trade group for consumer and commercial fireworks retailers.

Bill Weimer is vice president and general counsel at Phantom Fireworks, which brands itself the leading fireworks retailer in the US. In his nearly 30 years in the pyrotechnics business, this is the first season that's "knocked (him) over."

"Without reviewing specific numbers, the demand and the business we've seen so far has been the strongest early fireworks season I've seen in my years of involvement in the fireworks business," he said.

Weimer said more people are buying fireworks from Phantom, and they're buying them earlier than ever. Weeks before the the usual busy season of mid-June through the Fourth, Phantom locations have seen customers turn into repeat customers.

Around 40% of them are first-time buyers, he said. And because cities are canceling fireworks shows for the Fourth, Weimer suspects residents are taking it on to light up the skies themselves.

"It's a combination of people getting out, being anxious and having this pent-up energy, and then right around the corner is a quintessential firework holiday," he said. "Put the two together, consider the fact that there won't be a lot of fireworks, and suddenly, you have a formula that means people are buying more and more fireworks, and buying them earlier."

Mayor de Blasio, for his part, is hoping to bring the fireworks to the people. He announced the city will host a traveling, 5-minute fireworks show in each of the five boroughs starting next week, which will culminate in the televised Macy's Fourth of July fireworks show next month.

Correction: A previous version of this story incorrectly located California's Alameda County. It is near San Francisco.