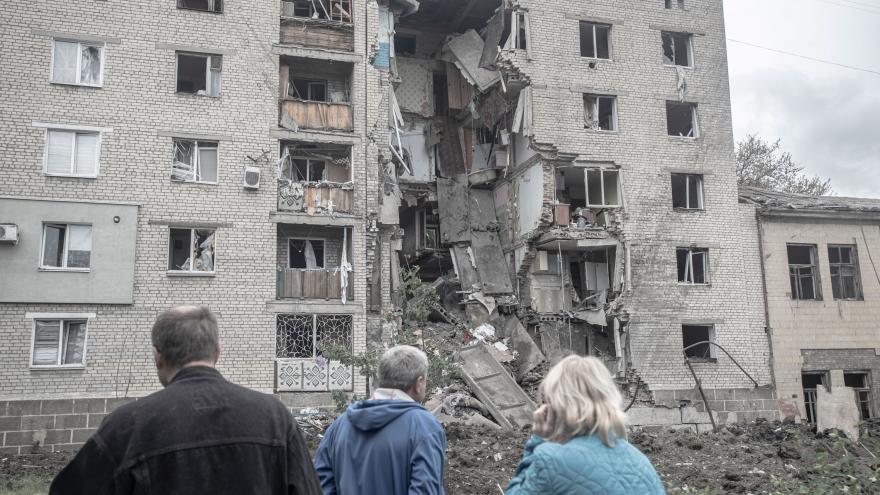 (CNN) -- It is nearly three months since Russia invaded Ukraine -- a 12-week period in which Russian forces have wrought devastation on the country and its people, resulting in death on a vast scale and causing millions to flee.

But the invasion has not been the militarysuccess Moscow hoped, and is now deep into its second phase.

The bulk of fighting has moved to the east, after failed Russian advances in central Ukraine. The defenders are even focusing on retakingsome key areas nearer the Russian border, while Moscow is seeing its troops beaten back in a few key battles.

Western aid is also flowing into Ukraine, NATO is set to be strengthened as countries seek to join, and the first Russian soldier accused of war crimes has stood trial.

Here's what has happened in several key areas since the war began.

He accused Russia of a "deliberate and criminal attempt to kill as many Ukrainians as possible" after a village in Chernihiv was hit with missiles, leaving many dead.

Officials in the region say the front line is being shelled "day and night," with Russian forces attempting to break through Ukrainian lines.

A NATO military official told CNN Wednesday that the alliance expects something of a stalemate over the next few weeks. But the official said NATO believes momentum has shifted significantly in favor of Ukraine and the debate within NATO circles is now over whether it is possible for Kyiv to retake Crimea and the Donbas territories seized by Russia and Russian-backed separatists, respectively, in 2014.

Ukrainian forces have beaten back Russia's assaults in Ukraine's second city of Kharkiv, and advanced toward the border in several places north and east of the city.

Ukrainian officials said last week they were liberating villages on the outskirts of the city. Their advances led to the symbolic and embarrassing expulsion of the Kremlin's forces back to their own border while posing the strategic threat of cutting Russia's supply lines into Ukraine and its forces further south in Donbas.

Anastasia Paraskevova recently returned to her home in Kharkiv for the first time since fleeing the city two months ago. It had been under constant bombardment since then, until Russian forces were repelled.

Paraskevova said overall the experience was good. "The city was much more alive. People were walking the streets. And some shops were working. It felt like some life was back, much better than it was when I was here in March."

Every day, hundreds, or even thousands, of people are trying to flee the Russian-occupied region of Kherson in southern Ukraine.

Last week, a convoy of about 1,000 vehicles tried to leave Kherson. The Russians ultimately let the convoy move in batches -- but only after holding it in one place for most of the day.

Mariupol, a port city on the Sea of Azov, finally fell to Russian forces after weeks of relentless bombardment.

The city was the scene of some of the most intense fighting since Russia launched its invasion of Ukraine. It was there that Russia carried out deadly strikes on a maternity ward and the bombing of a theater where hundreds of civilians had sought refuge from the violence.

Mariupol became a symbol of Ukrainian resistance as its defenders held out at Azovstal, a sprawling steelworks plant where as many as 1,000 civilians had taken shelter at one point, with stocks of food and water dwindling.

Ukraine's military announced late Monday that its forces had completed their "combat mission" at Azovstal, effectively ceding the city to Russian forces. On Friday, Ukraine ordered its forces to stop defending the plant.

With the city now almost fully under Russian control, there is concern that evidence of any potential war crimes -- like those allegedlycommitted in Bucha and Borodianka -- could be lost or destroyed.

More evidence of potential Russian war crimes is emerging in Bucha, the northern Ukrainian city near Kyiv, the capital. An investigation by The New York Times alleged that Russian paratroopers carried out summary executions of at least eight Ukrainian men in Bucha on March 4.

Evidence of mass graves and civilian executions in the towns of Bucha and Borodianka has continued to emerge since early April, following the withdrawal of Russian forces from the Kyiv region.

Images of bodies lying strewn the streets of Bucha have sparked international condemnation and fueled calls for an investigation into potential Russian war crimes.

CNN visited the scene of mass graves in Bucha in April after Russian forces had withdrawn, revealing the horrors of their occupation to the world. Correspondent Fred Pleitgen was among the first to reach a mass grave that residents dug while the place was under Russian occupation, because so many residents had been killed and longer burial ceremonies would have been too dangerous amid the shooting and shelling.

This week saw the start of the first war crimes trial in Ukraine since the invasion began. A 21-year-old Russian soldier named Vadim Shishimarin pleaded guilty to killing an unarmed 62-year-old man.

The trial's first day was so packed with journalists that authorities in Kyiv were forced to move to bigger venue. It has since produced several dramatic moments, including a confrontation between the soldier and the victim's widow and testimony from Shishimarin himself.

Speaking Friday, Shishimarin acknowledged he was responsible for the killing but was "sorry and sincerely repents."

"I was nervous the moment it happened. I didn't want to kill. But it happened and I do not deny it," he said.

Shishimarin's lawyer, Viktor Ovsyannikov, argued that while his client was guilty of killing, it was not murder.

"Shishimarin was in a state of stress caused by the combat situation and the pressure from his commander. Analysis of those circumstances allows me to conclude that Shishimarin had no direct intent for the murder," Ovsyannikov said.

Kremlin spokesman Dmitry Peskov said Wednesday that Russia has no details about Shishimarin's case and it considers the charges "unacceptable," "outrageous" and "staged."

Foreign diplomatic missions started coming back to life in Kyiv this week, after diplomats fled the city en masse at the beginning of the conflict.

The US flag was raised over the United States Embassy to mark the official resumption operations on Wednesday, while the Swiss Foreign Ministry said Thursday it would also reopen its embassy.

The US and France both began sending back diplomats to Kyiv in late April.

US lawmakers passed a bill Thursday that will send roughly $40 billion to Ukraine to pay for military and humanitarian aid, including funding that will assist Ukrainian military and national security forces, help replenish stores of US equipment sent to Ukraine and provide public health and medical support for Ukrainian refugees.

US President Joseph Biden signedthe aid package while he was in South Korea.

Helsinki and Stockholm had, for decades, avoided joining the alliance, but cited Moscow's invasion as the ultimate impetus to do so now. The two countries formally handed in their applications Wednesday.

Most NATO members appear ready to support both bids, except for Turkey.

Turkish President Recep Tayyip Erdogan said Thursday that his country "will say no to Sweden's and Finland's entry into NATO," citing their support for the Kurdistan Workers' Party (PKK). The PKK seeks an independent state in Turkey and has been in an armed struggle with Ankara for decades. It has been designated a terrorist organization by Turkey, the United States and the European Union.

Some experts say Erdogan may be angling for concessions or to highlight grievances Turkey wishes to bring to the attention of the international community.