'It's going to be within our capability' to prevent another coronavirus surge, Fauci says 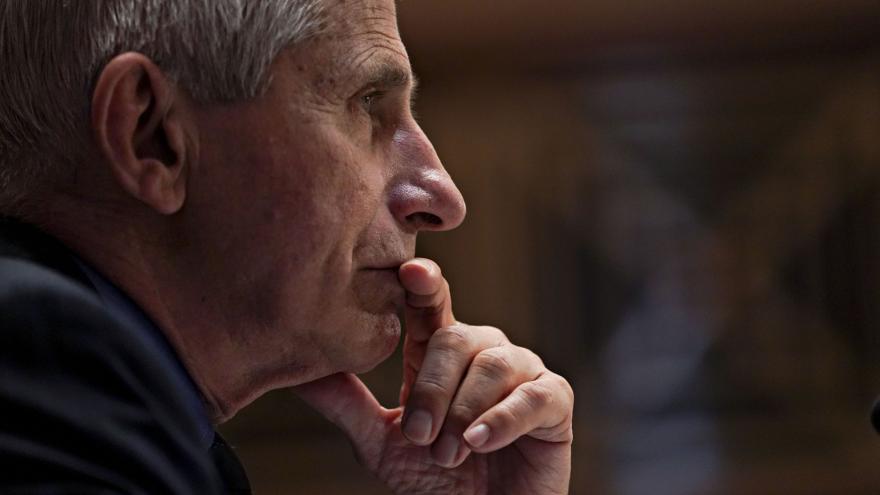 (CNN) -- The downturn in Covid-19 cases, hospitalizations and deaths could end with another spike in infections, Dr. Anthony Fauci said Sunday. But the US could still prevent that spike with higher vaccination rates.

"If we don't do very well in that regard, there's always the danger that there will be enough circulating virus that you can have a stalling of the diminishing of the number of cases, and when that happens, as we've seen in the past with other waves that we've been through, there's the danger of resurgence," Fauci, the director of the National Institute of Allergy and Infectious Diseases said on "Fox News Sunday."

Although cases still remain high, with an average of about 85,000 new infections a day as of Sunday, they are down by more than 8,000 from a week prior, according to data from Johns Hopkins University. Deaths are down an average of more than 200 a day from the start of the month.

Progress in the numbers is still threatened, however, by the low rates of vaccination. As of Sunday, 57% of the total population was fully vaccinated against the virus, according to the US Centers for Disease Control and Prevention.

And though health experts do not know exactly what proportion of the population needs to be protected to control the spread of the virus, Fauci has said a vast majority will need to be vaccinated.

The good news is, Fauci does not think another spike in cases is inevitable.

"It's going to be within our capability to prevent that from happening," said Fauci, who is also the chief medical adviser to President Joe Biden.

"The degree to which we continue to come down in that slope will depend on how well we do about getting more people vaccinated."

Health experts have pointed to vaccine mandates as a key tool to keeping cases down and relieving hospital strain, but some officials stand staunchly against the measures.

Fauci has been a proponent of mandates, saying the data shows that they work in getting more people vaccinated. And though it would be preferable to convince people to choose to get vaccinated, that is not always feasible, he said.

Arkansas Gov. Asa Hutchinson said Sunday that he believes both federal and state mandates are counterproductive to increasing vaccination rates.

Hutchinson told NBC News he believes muddled messaging at the highest levels of government has"slowed down acceptance of the vaccine and increased resistance."

"I'd like to see us get to, without the mandate battle, let's just encourage the vaccine acceptance, build confidence in it, and that's the direction we need to go," the governor said.

Asked specifically about the success of Tyson Foods and Walmart's vaccine mandates in the state of Arkansas, the governor said it is "absolutely" proof mandates work.

Hutchinson pointed out that employers must navigate a nuanced, on-the-ground reality of some employees wanting a vaccine mandated work environment to feel safe while others do not. Hutchinson said, based on that predicament, the choice of whether to mandate should be left in the hands of employers.

Even with waivers, some paid thousands for Covid hospitalizations, study says

Many insurers waived Covid-19 hospitalization costs in 2020, but those waivers didn't cover everything and out-of-pocket expenses cost patients a lot more than other respiratory diseases, according to a new study.

The study published Monday in JAMA Network Open found that out-of-pocket spending for Covid-19 hospitalization was about $4,000 on average for people with private insurance. For people with Medicare Advantage it was more than $1,500.

Researchers looked at hospitalization records for more than 4,000 people in 2020 and found that this spending was about four times the average out-of-pocket cost for other respiratory infections in 2019.

"The findings suggest that out-of-pocket spending for COVID-19 hospitalizations may be substantial if insurers allow cost-sharing waivers to expire," the study said.

In many places, the brunt of the hospital strain from Covid-19 has fallen on nurses, and a strike in Minnesota has impacted services.

Emergency and Urgent Care services have been temporarily suspended at Abbott Northwestern WestHealth in Plymouth, Minnesota, due to about 50 nurses from the Minnesota Nurses Association choosing to strike, according to a statement from Allina Health.

The nurses are striking to seek "a contract that provides fair pay and benefits to nurses on the frontlines of the Covid-19 pandemic," the association said in a statement Thursday.

"MNA nurses have been negotiating a new contract for months, but Allina has refused to agree to fair pay for holiday work or adequate benefits," the MNA said in the statement. "Compensating nurses fairly for holiday work is especially critical because understaffing by Allina and other hospital systems has required nurses to work more days and longer hours, including overtime and holidays, as they continue on the frontlines of the COVID-19 pandemic."

The closure began Sunday morning and will last until 7 a.m. local time Wednesday, according to the statement.

"Allina Health and Abbott Northwestern WestHealth have negotiated 7 times with MNA. A contract settlement was previously reached and unanimously recommended by the union's bargaining team. Unfortunately, the MNA could not finalize that agreement," Allina Health's statement says. "Throughout negotiations, we have consistently offered proposals that demonstrate our commitment to our employees, including an immediate wage increase to align wages with other metro hospitals and agreeing to some of the union's other priority issues."