It's been a tough year for Nashville: Tornadoes, a derecho, the pandemic and now an explosion 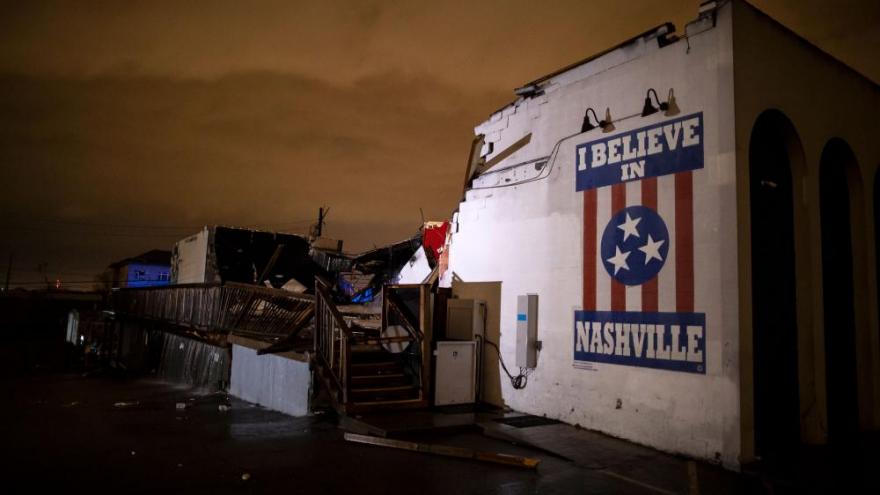 General view of a mural on heavily damaged The Basement East in the East Nashville neighborhood on March 3, 2020 in Nashville, Tennessee. A tornado passed through Nashville just after midnight leaving a wake of damage in its path including two people killed in East Nashville.

(CNN) -- Nashville residents woke up to a vehicle explosion on Christmas morning that authorities now believe was intentional.

The blast injured at least three people, damaged dozens of buildings and left people shaken during what should have been a joyful holiday spent with family.

It also dealt yet another challenge to the city's first responders in what's already been an incredibly challenging year. In 2020, emergency personnel responded to a tornadoes in March, a derecho in May and of course, the coronavirus pandemic.

Here's some of what the Music City has faced so far this year.

Friday's explosion struck around Nashville's 2nd Avenue, a street on the edge of the city's hospitality and tourist district in an old, historic part of town. Just around the block from the scene is Lower Broadway, a major tourist destination for country music fans replete with honky-tonk bars.

The Metro Nashville Police Department's hazardous devices unit was responding to a report from officers about a suspicious-seeming RV when the vehicle exploded around 6:30 a.m., according to police spokesman Don Aaron.

Three people were taken to hospitals from the scene, but none are in critical condition, said Nashville Fire spokesman Joseph Pleasant.

One officer was knocked down by the force of the explosion, while another experienced hearing loss, Aaron said. Fortunately, no officers were significantly injured.

The blast did, however, cause significant damage to the area.

Smoke filled the air on the street, cars erupted in flames, and nearby buildings saw glass blown out.

"Everything on the street was fire," eyewitness Buck McCoy told CNN. "There were three cars that were fully engulfed."

McCoy said the explosion took place in front of his home. When he looked outside, trees had fallen and broken glass was everywhere. People were filing out of their apartments with their animals, and he said firefighters told him to get as far away from the area as possible.

"There's just nothing left on 2nd Avenue," he added.

May: One of the largest power outages ever

In May, more than 130,000 Nashville residents were left without power at one point after a line of strong wind storms known as a derecho passed through Middle Tennessee. It was one of the largest power outages on record for the city.

Winds with speeds as high as 71 mph were reported in Nashville, bringing down trees and power lines and causing damage to some homes.

An off-duty firefighter died after a tree limb fell on him in Spring Hill, part of the Nashville metropolitan area. Two other people in Nashville were injured, the Washington Post reported.

Officials from the National Weather Service called the derecho likely the worst straight-line wind event in the area since 2004, according to CNN affiliate WTVF.

Residents were cleaning up the damage for weeks after the storms first hit.

Before the derecho hit in May, Nashville residents had already experienced a devastating weather event just two months earlier.

A series of tornadoes slammed into the area in early March, leaving behind incredible heartbreak and destruction.

Hours after the powerful storm hit the area, local officials were still searching through piles of rubble for survivors.

Ultimately, 25 people, including five children, were killed, The Tennessean reported. The newspaper described it as "one of the strongest and deadliest storms the country has seen in years."

Numerous homes, restaurants and churches were left in ruins, with entire neighborhoods in Nashville destroyed and the damage stretching to nearby cities and suburbs in the state.

All year long: A devastating pandemic

Just two weeks had passed since the tornadoes in Nashville when the coronavirus pandemic prompted bars to close and music shows to get canceled.

The closures transformed the world-famous entertainment district that was normally bustling with tourists into a ghost town.

Musicians and owners of establishments found a way to make things work during those early days, raising money for employees who were out of work and lending stages to bands so that they could perform via livestream -- and collect electronic tips.

But after a few months, some of the city's tourist hotspots started to open back up again, attracting crowds despite the ongoing pandemic.

And since around November, cases in the city have been surging.

Nashville has seen about 65,400 Covid-19 cases, with more than 7,000 of them active cases, according to the latest data. More than 400 people have died of the virus.