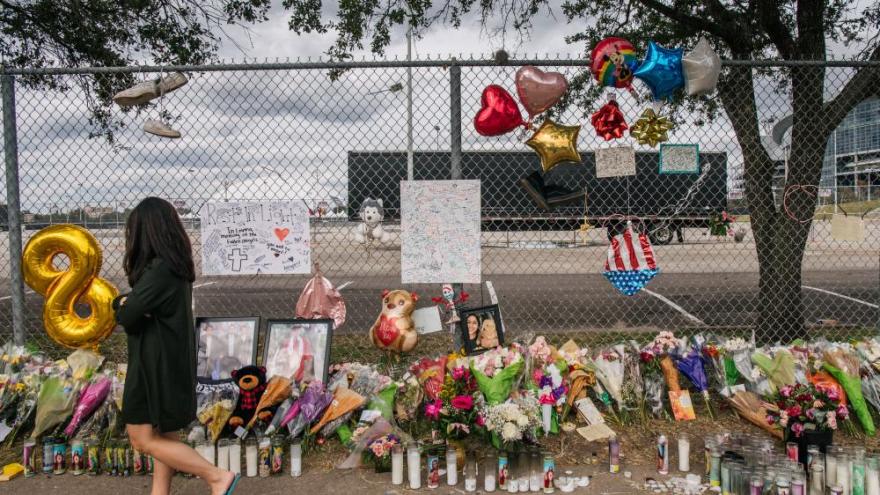 A woman walks past a memorial to those who died at the Astroworld festival outside of NRG Park on November 09, 2021 in Houston, Texas.

(CNN) -- Houston police told organizers at the weekend's deadly Astroworld Festival to stop the show when at least one person in the crowd was receiving CPR, police Chief Troy Finner said Wednesday.

"HPD personnel told personnel in charge of the event to shut down the performance," Finner said via Twitter after a news conference in which he noted that police alerted organizers about the life-saving measures.

Finner did not say when the show stopped after police had made the request.

Nearly a week after the tragedy, many questions remain unanswered, including whether event organizers, the performer or local authorities should have stopped Friday night's show earlier.

LIVE UPDATES ON THE INVESTIGATION

Finner said that the "ultimate authority to end a show (was) with production and the entertainer, and that should be through communication with public safety officials."

The investigation into the crowd crush will "take weeks, possibly months," Finner told reporters at a news conference in which he was critical of what he called rumors and speculation about what happened.

Texas A&M student Bharti Shahani, 22, is in a hospital fighting for her life, a family attorney said in a statement. Shahani is in critical condition and on a ventilator at Houston Methodist Hospital, attorney James Lassiter said.

Finner downplayed his relationship with headliner and festival organizer Travis Scott, saying the two have only met twice, including once before the concert.

Finner was asked about meeting with Scott prior to the show and said he "had no reason to believe that it wasn't going to be safe."

The chief was also asked about Scott getting a permit for future festivals, given Friday's deadly crush and problems in previous Astrworld festivals. Finner said he was not part of that process.

"I hope that those individuals that are making that decision.. they consider all this. We have eight people dead and two in the hospital, very critical," he said.

The chief said there was no evidence a security guard at the festival had received a drug-laced injection of drugs as had been previously reported.

'Everyone's life was on the line'

Survivors have described the horror of a "whirlpool" of people moving toward the stage during Scott's performance Friday night.

"Everyone's life was on the line" as the pressure built up during the show, Bryan Espinoza, 16, said at a news conference Tuesday with others who'd been in the crowd of 50,000 and got caught in the surge. Espinoza ended up pinned against a metal barrier, he said

"At one point, my ribs were getting into the railing, basically impaled, and I was fearing for my life that I wasn't gonna make it," Espinoza said. A security guard helped him jump the gate, and there were "hundreds of bodies on the floor already from people passing out, falling over the railing," he said.

Eligio Garcia, 18, and his girlfriend were caught up in a "whirlpool" of people at the start of Scott's set, he recalled.

"Just kids and people falling and people trying to reach up, like they're reaching up for you," he said. "I really heard people screaming like, 'Help, please help me.'"

Garcia and his girlfriend were knocked over, and others fell on top of them, he said. Eventually, they managed to get upright in the scrum, he said, and cries for help throughout the crowd to staff or show officials at the end of each song went unanswered before another began.

"It's a whole nightmare that just continues to play every night in my head," he said.

Also in the scrum were Ayden Cruz and his friend Brianna Rodriguez, who died. They were around a "circle of people who had fallen behind us" and were next to stumble, Cruz told CNN.

"The ripple effects of the crowds going forward and backward, we were pushed onto our backs, and as that happened, people began to fall on top of us and cause it to be harder to get air and just so much weight on both of us," he said, adding another friend "fell as well on his back and people on top of us. It was really scary."

At least 18 lawsuits had been filed in Harris County District Court in Texas related to the Astroworld tragedy. A Houston attorney has "filed 68 lawsuits for injured victims, and we intend to file probably up to 100 if not more by the end of the day or the following day," he told CNN on Wednesday.

The list of defendants -- including Live Nation, the show's promoter and organizer; Travis Scott; musician Drake; and NRG Park, where the festival took place -- is growing to include a security company and potentially others, lawyer Thomas Henry said.

As officials work to gain a full understanding of what happened in the crowd during Scott's set, they are "looking at everything from the very beginning," Mayor Sylvester Turner told CNN on Tuesday.

"We're looking at the roles that everyone played, what missteps, failures, gaps that may have existed," Turner said, adding they aren't ruling anything out.

Officials are looking into complaints by fire officials there were failures in communication as the deadly crowd swell unfolded, the mayor said.

Firefighters stationed outside the Astroworld venue were not in radio communication with the emergency medical providers hired by the concert organizers, Peña told CNN.

Houston fire officials on standby near the venue had asked concert organizers for a radio to communicate with the emergency medical provider company but were only provided with cell phone numbers, according to the president of the city's firefighter union.

Concert attendees couldn't text or call due to poor cell service, some have said.

After learning of the crush, the fire department sent its resources into the crowd, saying eventually 12 "very critical" victims were transported, in many cases with CPR in progress.

At 10:15 p.m., the fire department upgraded its response to a mass casualty level two -- meaning that between 20 and 50 people could be in need of transportation to hospitals, according to documents obtained by CNN and Peña.

Live Nation, the show's promoter and organizer, has turned over some video footage from the event to Houston police, who are hoping to get more as the criminal investigation moves forward, Turner said.

Harris County Judge Lina Hidalgo is considering an outside law firm or other third party for the independent investigation into the tragedy, according to her spokesperson.

Finner on Wednesday defended his department's ability to investigate the tragedy, saying an independent probe is "not warranted right now."

Mourning those killed and recalling the horror

Mourners have paid tribute at a vigil at NRG Park to the concertgoers killed. Among them were a neighbor and former classmate of Madison Dubiski, 23.

"She was a really sweet girl, and it's just really sad what happened to her," Caitlin Barrera told CNN. "This is the last thing that you would think would happen."

Rusty Barber, who did not know the victims yet wanted to pay his respects, shared his frustration with how Friday's concert turned to tragedy and Scott's set continued during the surge.

Scott maintains he had no idea the extent of what was happening in the crowd during Friday's show. Footage from the concert's live stream showed Scott pausing his performance and looking on in apparent confusion as an ambulance pulled into the crowd before finishing the concert.

The performers should have stopped the show that night, said Henry, the lawyer who said he's lodged dozens of suits.

"At 9:38 there was a mass casualty incident report to all the producers at the show," he told CNN. "By 10:15, the show had ended. But in that period of time, Drake came on stage while people were being injured and killed. Those performers -- Drake and Travis Scott, along with all of the event organizers -- knew the dangers associated with the crowd, what was going on with the crowd, and yet they continued to perform.

"And from the stage, you could see absolutely Travis Scott noticing people being injured, noticing people being carried off unconscious," Henry said. "And so those performers, instead of stopping the show and keeping those people safe in the crowd and taking those steps necessary to stop the event -- help stop this crowd issue -- they continued and the crowd was excited, the crowd got worse and more people got injured because they continued to perform."

Finner said festival organizers had not provided adequate records on the number of private security personnel at the venue.