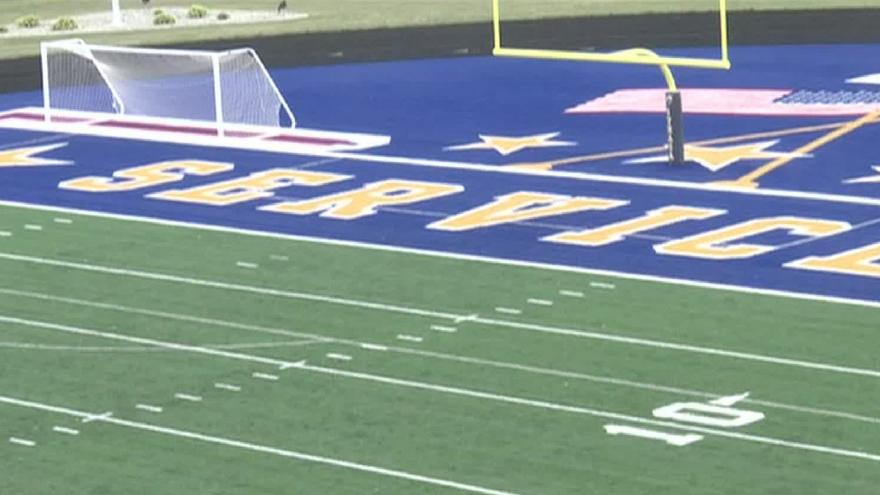 By Jason Fielder and James Paxson

ITHACA, Michigan (WNEM) -- A Michigan high school sports stadium will get a facelift with grand plans to make it an enormous memorial to veterans and first responders.

Over the last 10 years, Ithaca’s football program has been one of the most dominant in the state of Michigan, with seven division six championship game appearances and five state titles. This summer, thanks to the generosity of an anonymous donor, the program now has a new, state-of-the-art, artificial field turf.

“Last year, we had muddy games. So this summer there’d be holes and stuff in the field and with a new surface like this, we don’t have to worry about that at all,” said Bronson Bupp, senior quarterback and defensive back.

Ithaca’s original grass field turf was installed in 1975 with only minor upgrades over the last few decades. Head football coach Jordan Hessbrook said the school was long overdue for new turf. Heavy rain sometimes makes the field so unplayable the team has had to reschedule home games and play them at offsite locations.

“If you go through the years, you can see a lot of our games have been really a safety concern because of the playing conditions. That’s a loss of our home field advantage, plus a loss of our concession stands, a loss of our gate, plus paying to move our game to another facility that rental fee,” Hessbrook said.

New field turf is only part of the grand plan for this facility. It is going to become an immense patriotic tribute to those who served and made the ultimate sacrifice for our freedom.

The donor, who wants to stay anonymous, said by next fall there will be large monuments and plaques built around the field to honor Michigan’s 22,000 gold star veterans and first responders who gave their lives in freedom conflicts since 1900.

The donor said there will also be veteran memorial scholarships for each of the six public high schools in Gratiot County. They said this entire patriotic remembrance project is being done not just for Ithaca, but for the county and the state of Michigan.

The players say they are 100 percent behind it.

“I thought it was a really cool thing to do because the military has done so much for us and our veterans are so important to us. We have done some military things before, like small tribute nights. But now, it’s always here and it’s a cool thing to have,” said Jeffrey Lombard, senior offensive and defensive lineman.

The season opener for Ithaca on their new field turf will be Aug. 26 against Homer.