'It needs to stop.' Active shooter hoaxes at schools are having serious consequences 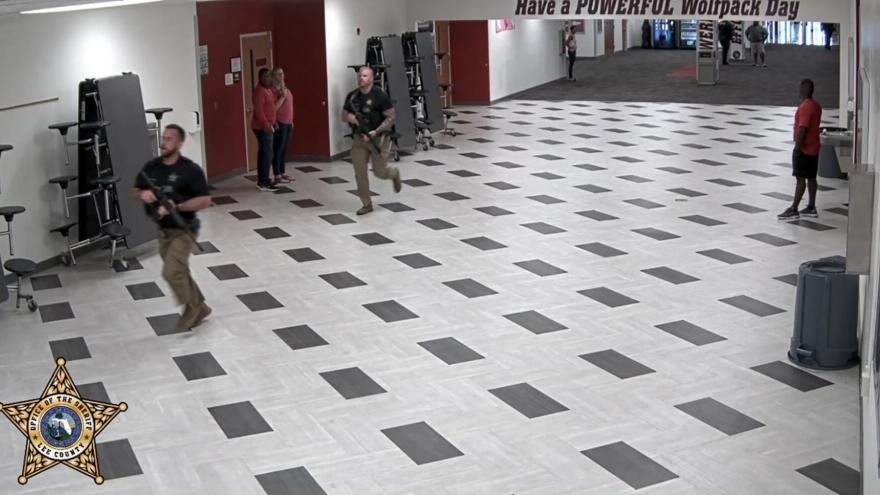 Officers were on the scene at South Fort Myers High School in Florida on Friday responding to a report of an active shooter. It was determined to be a hoax call.

(CNN) -- It was a peaceful Friday morning for Murrisha Leon, who was asleep when she received a call from a fellow parent warning her of an active shooter at their children's high school in Arkansas.

Immediately, Leon's heart sank as images of worst-case scenarios flooded her mind. She might lose one of her kids today, she told herself.

"I jumped up in a panic and instantly threw up," Leon told CNN. "I believed it and feared for my children's lives. I called them, and when they didn't answer the first time, I started crying."

Leon's son, 14, and daughter, 16, both attend Watson Chapel High School, which was put on lockdown immediately after the school received news of a possible active shooter on campus -- another in a series of reported threats at US schools this week.

Leon soon received a text from her son, saying, "Mama please come get me, they say three people got shot in the bathroom and I'm scared."

After an agonizing 30 minutes of waiting at the school, Leon -- along with hundreds of other panicked teachers, students and parents -- discovered that it was a false alarm.

A series of prank text messages were sent to police, alerting them of an armed person on campus and saying shots had been fired, the Pine Bluff Police Department wrote on Facebook. A sweep of both middle and high school campuses confirmed the report was a hoax.

False reports like this are a growing problem in the United States, and have even caught the attention of the FBI.

As students throughout the district were being released to parents, many still in tears, a similar panic was unfolding elsewhere.

At least two other US school districts had hoax calls on Friday, following a number of false reports claiming active shooters earlier this week.

The Lee County Sheriff's Office in Florida received a report Friday afternoon of a possible threat to schools in the district, the office said. Out of an abundance of caution, several schools in the district were placed on lockdown, with "special attention" paid to South Fort Myers High School, the department said.

"All resources were allocated and deployed to the school. Shortly after, it was determined to be a hoax call," the sheriff's office said.

The Hollywood Police Department in Florida also received a call Friday afternoon regarding a "possible threat" at McArthur High School, the department said. It later confirmed that no threat was found on the campus.

Incidents like these, where prank calls are made to authorities to lure them to a location under the false pretense that a crime has been committed or is in progress, are sometimes called "swatting," and usually results in a forceful response from local police or SWAT teams.

Authorities are taking note of its frequency, and warning the public of its dangers.

"The FBI is aware of the numerous swatting incidents wherein a report of an active shooter at a school is made," the FBI said in a statement Thursday after a high school in Houston, Texas, was evacuated due to a false report of "10 people shot" earlier in the week.

"The FBI takes swatting very seriously because it puts innocent people at risk."

Swatting has led to tragedy before. In 2017, 28-year-old Andrew Finch was accidentally killed by police in his Kansas home after a prankster reported a hostage situation at the address. Tyler Raj Barriss, the man who made the report, was charged with involuntary manslaughter and ultimately sentenced to 20 years in prison.

"It's not a joke and it's not harmless," CNN chief law enforcement and intelligence analyst John Miller said. "Out of all the types of swatting, this creates the most danger. When police show up for what they think is an active shooter, they come in strong, heavy, armed, and fast. It raises the level of hazard for everyone involved and is putting people in danger."

"It puts a lot of police resources towards an incident that's not really unfolding, because it creates this sense of severe and urgent danger that could result in many fatalities," he said. "It also takes police resources away from incidents that really are happening. Low priority calls can be quite serious and you're delaying response times and not allowing help to get to people who really need it."

While investigations into hoax calls like the ones that occurred Friday are "extremely, extremely time consuming and challenging" due to callers hiding behind layers of concealment, encrypted platforms and the dark web, Miller said, it's critical for local police to take them seriously.

"It's still worth it to pursue these cases because when they end in arrests, it really knocks out the idea it can be done without consequence," he added.

'You can't imagine the stress and hurt you put on families'

Nothing was funny about the parents who stood outside Watson Chapel High School on Friday crying out their children's names, Leon said.

It wasn't funny inside the school either, where Jacorrian Spears said students and staff were texting friends and family to say "I love you" one last time.

Immediately, Spears locked his classroom door and blockaded the room with a bookshelf before taking cover with frightened students. Nearly an hour later, everyone was released.

From his window, Spears saw a stream of parents running to unite with their children.

"Teachers were trying to piece together what happened and students were just ready to go home," Spears said. "When we found out it was a prank, I guess I was kind of relieved but it still was terrible."

In addition to sparking fear and panic, Spears said the incident re-traumatized many of his students, who witnessed one of their classmates die in a 2021 shooting at the middle school, which is on the same campus as the high school.

"The students said they had flashbacks of the shooting that happened to them in junior high," Spears said. "Those kids are now 11th graders and they still wear RIP hoodies and shirts of their classmate. They've told me before how it still kind of haunts them and today didn't make it any better. "

The 15-year-old boy who died in the 2021 shooting was Leon's daughter's best friend. "She relives that memory everyday," Leon said. "Today brought everything back."

Leon is now focused on helping her children move past yet another traumatizing event.

"It's very stressful being a parent today," Leon said. "I'm afraid every time they walk out the door. Even before today, I stressed about my children going to school."

"In this day and time, things like this really happen," she added. "You can't imagine the stress and hurt you put on families when you do things like this. This is something most parents worry about everyday when we send our children to school. It needs to stop."