'It gets harder every day.' For many in rural Kentucky, their Christmas gift is survival 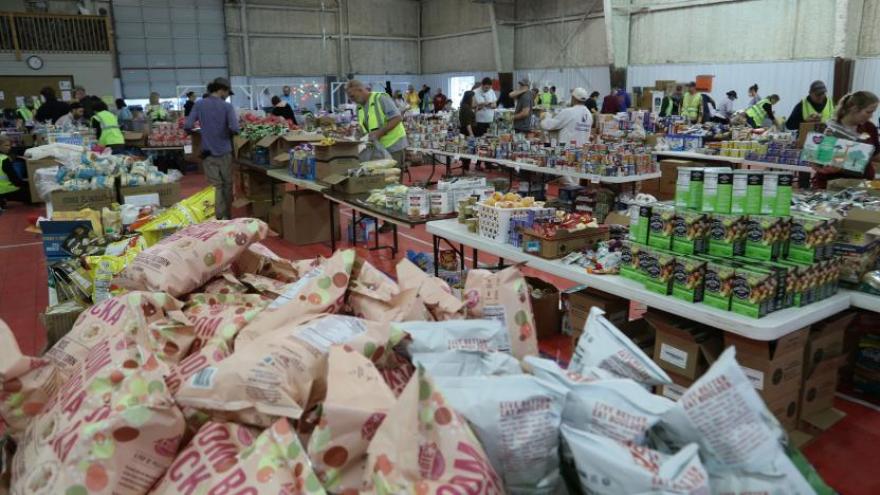 Food, clothes and other supplies are organized at a supply center in Mayfield on December 15.

(CNN) -- As Johnny Stutzman surveyed the wreckage of what had been his house, all he could do was muster a laugh.

"My front porch is laying over there on the other side of the road," he said, pointing to a splintered pile of rubble that had landed amid trees across a Kentucky state road when a deadly tornado hit the night of December 10.

Stutzman, 23, is part of the conservative Swartzentruber community of about 40 Amish families in the area. He and his wife survived the tornado — climbing into their basement just as their windows shattered.

But his neighbors, Jacob and Emma Gingerich, and two of the Gingerich's five children were killed when their trailer home was ripped from its frame. Emma Gingerich was Stutzman's cousin.

Family members and friends from five states had arrived by bus early last week for the Gingerich family funerals, and they stayed to help with clean-up and the start of the rebuild. They slept on the floors of homes still standing.

Members of the Kentucky National Guard had stopped by earlier Thursday to drop off sleeping bags. In the afternoon, as a heavy rain began to fall, several men were unloading a pallet of new windows that had just been delivered.

There's just so much work to be done.

A week after the deadly long-track tornado ripped through western Kentucky, residents of the region were rallying around those who had suffered the worst damage, much like the Amish community that had gathered in rural Graves County, several miles outside Mayfield.

In Mayfield, a town of less than 10,000 people where more than one-in-three residents live below the poverty line, many people said they were committed to remaining in the area and rebuilding what they had lost.

But anxiety over the economic blows so many had suffered had also set in, with many beginning to confront the long process of recovery with more questions than answers.

In Mayfield, the owner of a food truck that sells the self-proclaimed hottest wings in the world wondered how he would afford new grills. A basketball trainer hoped the children he works with would have access to a gymnasium soon so he could make a living again. A mother of four worried about where she and her four children would stay after two weeks of free lodging at a nearby resort runs out.

Stutzman had five buildings on his property: a house, a barn, a workshop, and buildings for machinery and lumber. All were destroyed.

"We don't have anything usable as far as furniture. And as you can see, there's a lot of our stuff over there," Stutzman said, looking across the street.

"First of all, we're going to rebuild everything and try to get back into our home," he said. The challenge, he said, is paying for the materials he will need.

"I'm not going to ask for it," Stutzman said. "But we're going to take all the donations so we can buy what we need for materials and stuff to rebuild."

With Christmas just days away, some in Mayfield who survived the tornado, some of whom saw presents they had already purchased get damaged or destroyed, said they were scaling back their plans. They were simply grateful to have survived to see the holiday at all.

"There is no Christmas. Not this year," said Angee Wilson, 46, who works in her mother's tax preparation office, which was demolished by the tornado. "It's just a day. We're just thankful that we're actually still here. We can celebrate it maybe in February."

Nicole Rudolph, a 28-year-old housekeeper who lives on the outskirts of Mayfield with her four young children and another on the way, said she expects a low-key holiday season — but is glad to have survived a difficult stretch leading up to it.

Rudolph, who is vaccinated, said she and her children had gotten Covid-19 in the fall — among the many in Graves County, which saw a severe spike in cases in August and September. She said it was the worst illness she'd ever experienced.

"I know for children, Christmas is about gifts. But in reality, it's just about making it. It's about love. It's about support from your family," Rudolph said.

Her house was not badly damaged, she said, but the food in her refrigerator had spoiled with much of Graves County without electricity. She was filling a plastic tote with canned goods at the Graves County fairgrounds' supply center on Wednesday.

"It gets harder every day," she said. "I'm still able to make it through, with the people out here to help us."

'The bills still go on'

Through the streets of Mayfield, most businesses remained shuttered last week as the town waited for power to be restored.

A McDonald's was closed, but the fast-food chain operated a food truck in its parking lot. A Walgreens became a gathering spot for distributing water and other supplies to those working on clean-up efforts, with portable toilets in its parking lot.

Businesses that weren't demolished have boarded up their broken windows and temporarily patched holes in roofs with tarps. Children's playground equipment, pieces of fencing, patio furniture and more debris were scattered throughout residential areas.

Farther away from the tornado's path, those whose houses were not destroyed have lined their front yards with massive piles of sticks and branches, awaiting clean-up crews to haul the piles away.

Dozens of buildings and houses that were directly in the tornado's path are now piles of rubble, with cars too damaged to drive left parked beside them. And days after the tornado, those who lived and worked in those homes and buildings continue to search for their belongings and mementos.

Wilson and her friend Shawna Driscoll on Wednesday were climbing through the rubble of what had been Wilson's mother's tax preparation office.

They were securing clients' files. But they were also searching for an important keepsake: a photo of Wilson's grandfather that sat atop a shelf by a window. They didn't find the picture.

Wilson and Driscoll met President Joe Biden during his trip to Mayfield on Wednesday. Wilson said the two asked for counseling services and first aid kits, so that hospitals' emergency rooms wouldn't be crowded with people who suffered minor injuries like glass cuts while clearing debris. Both the first aid kits and counseling services had shown up a day later, Wilson said, though she did not know whether Biden was directly responsible for their arrival.

On the trip, Biden announced that the federal government would cover 100% of costs of emergency work for the first 30 days after the tornado outbreak.

Wilson, 46, said their immediate needs were covered — but, like many in Mayfield, expensive repairs are looming in the weeks and months ahead.

"We could use a new roof and a new fence for my dog," she said.

James Stovall, the 67-year-old owner of Larry, Darrell & Darrell Bar-B-Que — who claims to have come up with the recipe for the hottest wings on earth, using nine of the world's spiciest peppers — was trying to recover the grills for his food truck on Thursday. His food truck and grills had been picked up and destroyed by the tornado, left amid the piles of rubble in downtown Mayfield.

He said he wants to keep his business going. But he's facing an $18,000 price tag for a used food truck and at least $50,000 for grilling equipment.

Still, big business is looming: His barbecue is always a major hit at the spring's annual QuiltWeek convention, which brings tens of thousands of quilters to nearby Paducah.

Stovall said he is trying to "keep it together and get everything that I can salvage."

"My banker called me this morning — 'James, you need to make a deposit,'" he said. "The bills still go on. It's tough when I look at what it's going to take me."

'It's all about moving forward'

This rural, conservative region of western Kentucky is relatively isolated from major cities with abundant temporary housing. Larger cities like Nashville, Tennessee, Louisville, Kentucky, and Evansville, Indiana, are at least two-hour drives away.

Some residents in Mayfield are desperate to find places to stay — especially as free, temporary options run out and savings accounts are drained to foot hotel bills.

Some have left town. Others are sleeping in their cars, or on the floors of the houses of family members in town. Hotels within a one-hour drive of Mayfield are packed.

In a building that's been turned into a supply center at the Mayfield-Graves County Fairgrounds, where dozens of volunteers wearing yellow vests were unloading a constant stream of canned goods, toiletries, diapers, pet food and more while the Kentucky National Guard directed traffic, people described a deep uncertainty about where they will end up and how they will pay for it.

Sammantha Smith, a 31-year-old cook who lives in public housing in Mayfield, said that a resort northeast of Mayfield had given her family a cottage for two weeks because her house's windows were shattered and its roof was falling down. She was gathering cleaning supplies, cereal and other necessities in a large plastic tote.

She said she doesn't know when she'll be able to provide any sense of normalcy for her four children, who range from age 4 to 10.

"It's hard to gain normalcy, because we're only going to be there for two weeks, and then we have to find somewhere else," Smith said. "It may be a month, two months, before we can even get back into our house. So we're just having to maneuver through everything."

The Federal Emergency Management Agency had set up a trailer in a parking lot behind a tire store in Mayfield to help those who had lost their housing in the tornado.

Among those who stopped in Thursday was Benjamin Dordoye, a 29-year-old basketball trainer in Mayfield. Dordoye said he is paying for a hotel room now, after trying to stay in his house for the first days after the tornado. He said he had to leave because his roof is cracked and he had no electricity — leading to cold nights.

Dordoye said FEMA officials told him he would receive a follow-up phone call. In the meantime, he said, he has no income.

"Working on kids, you know, that was mainly my main income. So right now I really don't have an income," he said.

Many in the region whose homes and businesses were not severely damaged were volunteering at shelters and supply centers and with clean-up crews. Others were driving food, water and supplies to people they knew in Graves County.

Rebecca Head, a 45-year-old crisis therapist at Four River Behavioral Health who said she was helping clients find places to stay, was picking up cleaning supplies at a supply center to deliver to those clients.

"It's all about moving forward," Head said, "and just seeing where you can help."