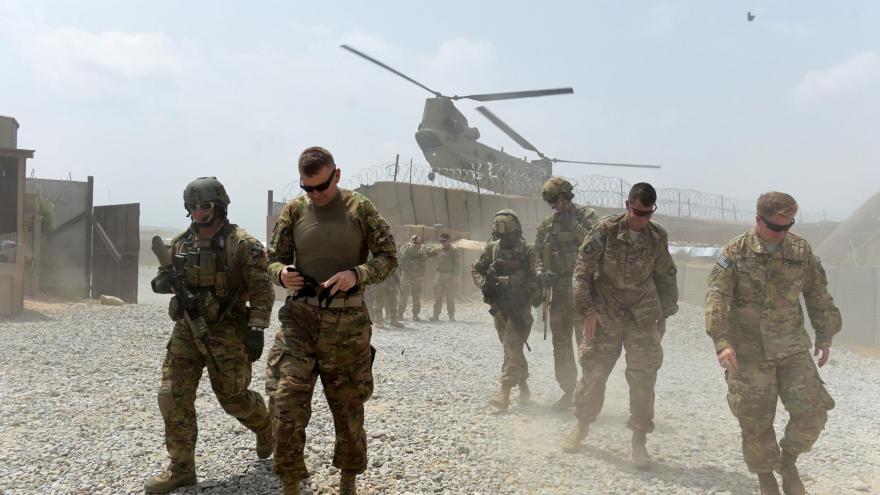 (CNN) -- The US military is establishing "alternative routes" to Kabul airport because of a threat the terror group ISIS-K poses to the airport and its surroundings, as President Joe Biden met with senior officials Saturday to discuss the security situation in Afghanistan and counter-terrorism operations against the Islamic State offshoot.

"There is a strong possibility ISIS-K is trying to carry off an attack at the airport," a US defense official told CNN. A senior diplomat in Kabul said they are aware of a credible but not immediate threat by Islamic State against Americans at Hamid Karzai International Airport.

Two US defense officials described the military effort to establish "alternative routes" for people to get to Kabul airport and its access gates, with one saying these new routes will be available to Americans, third party nationals and qualified Afghans.

The Taliban are aware of the new effort and are coordinating with the US, one of the officials said.

The Pentagon has been monitoring the situation around the airport, aware that the swelling crowds on the grounds and around the airfield create a target for ISIS-K and other organizations, which may use car bombs or suicide bombers to attack, the second official said. Mortar attacks are another possible threat.

Details of the plan are being closely held, but the broadly sketched-out details call for people to follow new routes and access points in coordination with Taliban on the ground in an attempt to help disperse the gathering of large crowds or avoid the crowds altogether, the two officials said. US personnel would be in a position to observe the movement of people to ensure safety, but the official would not specify if that involves direct observation by nearby troops as well as the use of intelligence sensors.

"There's a whole canopy of security concerns we have," Pentagon press secretary John Kirby said at a press briefing Saturday, as he described the military "fighting against both time and space" in its effort to safely evacuate people.

"The idea is to get as many people out as fast as we can," Kirby said. "That's what the focus is. In trying to accomplish that mission, we're taking in a whole wealth of information about what the security environment looks like."

Biden and his national security team met in the Situation Room on Saturday morning to discuss "the security situation in Afghanistan and counterterrorism operations, including ISIS-K," the White House said. "They discussed the massive logistical operation to evacuate American citizens and their families, SIV applicants and their families, and vulnerable Afghans both on U.S. military aircraft, as well as flight charters and coalition flights."

Biden referred to the threat from the Islamic State terror group in an address to the nation on Friday, telling Americans that, "we're also keeping a close watch on any potential terrorist threat at or around the airport, including from the ISIS affiliates in Afghanistan who were released from prison when the prisons were emptied."

Biden noted that ISIS in Afghanistan have been the sworn enemy of the Taliban, with which US officials have been coordinating and communicating on a constant basis over access to the airport.

"I've said all along," Biden added, "We're going to retain a laser-focus on our counterterrorism mission, working in close coordination with our allies and our partners and all those who have an interest in ensuring stability in the region."

'The best job they can'

According to an official familiar with the matter, Biden has pushed his team to ramp up flights and evacuations but accessing the airport has become difficult as crowds swarm the gates.

Not long before the President met to confer with Vice President Kamala Harris, Defense Secretary Lloyd Austin, Joint Chiefs Chairman Mark Milley, Secretary of State Antony Blinken and others on Saturday, the US embassy in Kabul sent a security alert saying that "because of potential security threats outside the gates at the Kabul airport, we are advising U.S. citizens to avoid traveling to the airport and to avoid airport gates at this time unless you receive individual instructions from a U.S. government representative to do so."

At the Pentagon, where an official told CNN on Saturday that evacuations had slowed in the past 24 hours, spokesman Kirby said the State Department is "doing the best job they can to advise Americans who still haven't made it to the airport, what the situation looks like around the airport, that would be the prudent thing to do."

"If you're an American and you're at a gate, you will be let in that gate," Kirby said Saturday.

But gates to the airport have been closed for "short durations" over the past 24 hours, Gen. Hank Taylor, deputy director of the Joint Staff for Regional Operations, told reporters during the Pentagon briefing with Kirby.

"There's been short durations throughout the last 24 hours where gates have been closed to allow the proper people to come in and out of those gates," Taylor said.

The President asserted on Friday that there's no indication American citizens have been prevented from getting through to the airport but acknowledged the risks involved with the evacuation mission, saying it "is dangerous, involves risks to Armed Forces, and has been conducted under difficult circumstances."

Biden stressed that he could not promise what the final outcome will be, or "that it will be without risk of loss." But he added that "as Commander in Chief, I can assure you that I will mobilize every resource necessary."

Speaking to reporters Saturday, Kirby did not rule out taking other measures to get Americans to Kabul airport, including having US military troops go into the city and retrieve them, if necessary. On Friday, the Pentagon revealed it had used three CH-47 Chinook helicopters to retrieve 169 Americans who had gathered at a hotel about 200 meters from an airport gate, wary of the risks involved in trying to walk through the throngs outside amid reports of violence and Taliban beatings.

"We're going to continue to explore options to assist Americans as needed," Kirby said. "We will do that here at the Pentagon. If there's a need to do something different than what we're already doing to facilitate them getting into the airport ... we'll certainly consider those options."

'Fighting against both time and space'

But Kirby acknowledged the challenge the military is facing as it works towards an August 31 deadline to leave the country. Biden has indicated the US may have to stay beyond that date if all Americans have not been evacuated yet.

"I think we've been very honest about the fact that we know that we're fighting against both time and space," Kirby said. "That's really what, that's the race that we're in right now, and we're trying to do this as quickly and as safely as possible."

The pace of the evacuation effort slowed after a bottleneck developed Friday as space at the Al Udeid Air Base in Qatar, one of the leading destinations for flights, neared capacity, forcing the US to scramble for other locations.

Only 6 C-17s have left Kabul international airport in the past 24 hours, carrying some 1,600 people, a defense official told CNN, a dramatic reduction in the pace of evacuations as a result of Friday's 8-hour delay in flights.

That figure was a stark drop from the 6,000 people who flew out of Kabul in the previous 24-hour period on 16 C-17 flights and a C-130, according to figures Taylor gave reporters during a Pentagon briefing on Friday.

On Saturday, Taylor told reporters that on military aircraft and charter planes combined, approximately 3,800 people were evacuated in the past 24 hours.

C-17 military planes are now "moving between Qatar and Germany," Taylor said, and in the past 24 hours, three flights from Kabul landed at Dulles International Airport near Washington, DC. Some Afghans will be transitioned to Fort Bliss for further processing, Taylor added.

On Friday, US officials announced a dramatic expansion in the number of countries that will help transit Americans or temporarily host Afghans, including Germany where the first evacuation flight of about 350 people arrived at Ramstein Air Base.