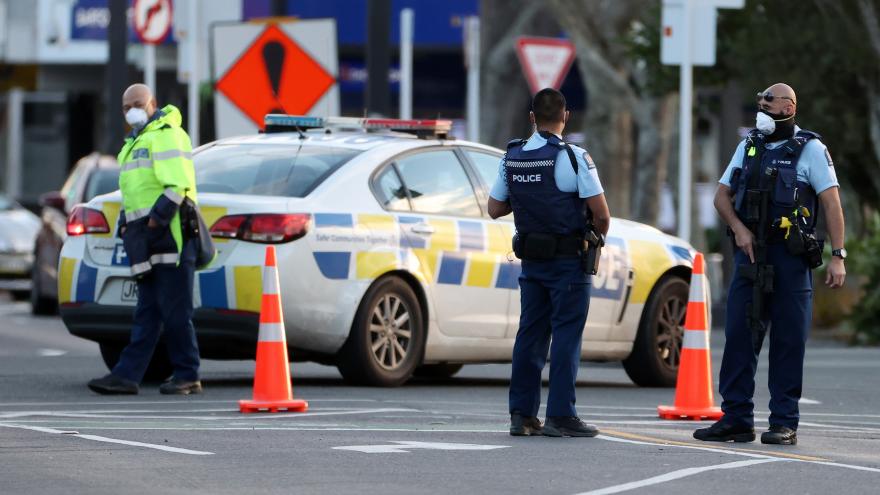 (CNN) -- New Zealand police have shot and killed an ISIS supporter who injured at least six people in a supermarket "terrorist attack" in the Auckland suburb of New Lynn on Friday, authorities say.

"This afternoon at approximately 2:40 p.m., a violent extremist undertook a terrorist attack," said Prime Minister Jacinda Ardern in a news conference Friday afternoon. "This was a violent attack, it was senseless, and I am so sorry it happened."

Ardern added that the man was a Sri Lankan national, a "supporter of ISIS ideology," and a "known security threat." He was under constant surveillance by multiple government agencies, and security personnel were able to shoot and kill him within 60 seconds from the start of the attack, she said.

The attacker obtained a knife within the store and used it to stab shoppers before police shot him, said New Zealand Police Commissioner Andrew Coster, who described him as a lone actor. The man died at the scene.

Videos posted online showed panicked shoppers running out of the LynnMall Shopping Centre and looking for cover as the situation unfolded.

Six people have been injured, emergency crews said, with three in critical condition. Heavily armed police and ambulances remain at the scene, and authorities have cordoned off the surrounding streets.

The attacker came to New Zealand in 2011 and became a person of interest in October 2016, authorities said.

Ardern did not publicly share the man's identity, saying he had faced court in the past and suppression orders prevented officials from releasing certain information about him.

The Prime Minister added that she had been "personally aware" of him before the attack, and authorities were monitoring him because they could not keep him in prison.

"I acknowledge this situation poses questions about whether police could have acted faster or done more," Coster said. "I am confident we have done everything we can within the law ... we were doing everything we could to monitor him. The fact we were able to react within 60 seconds shows that."

Auckland was already under a Level 4 lockdown, the country's most stringent level, due to surging coronavirus cases -- meaning most shops are closed and most people must stay home. Supermarkets remain open as an essential service.

Countdown, the supermarket chain that owns the LynnMall location, said in a statement it was "devastated" by the attack.

"Our hearts are heavy knowing what our team and customers have witnessed and been through," the statement said.

New Zealand has been on alert for attacks since a white supremacist gunman killed 51 people at two mosques in the city of Christchurch on March 15, 2019.

Ardern, asked if the Friday attack could have been revenge for the 2019 mosque shootings, said it was not clear. The man alone who was responsible for the violence, not a faith, she said.

"It was hateful, it was wrong. It was carried out by an individual, not a faith," Ardern said. "He alone carries the responsibility for these acts."