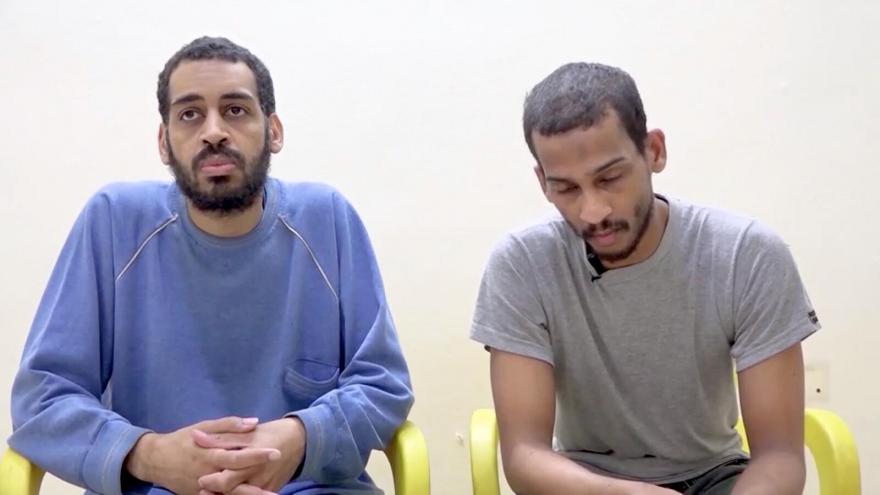 ISIS fighters that were accused of killing Americans are expected to be transferred to the US in coming days.

(CNN) -- Two high-profile ISIS fighters in US detention overseas are expected to be transferred to the US in the coming days, a US official told CNN Tuesday.

Alexanda Kotey and El Shafee Elsheikh, dubbed "the Beatles" because of their British accents, were part of an ISIS execution cell that have been accused by the State Department of "holding captive and beheading approximately two dozen hostages," including American journalists James Foley and Steven Sotloff and American aid workers Peter Kassig and Kayla Mueller.

Kotey and Elsheikh had their UK citizenship revoked for being considered a national security threat after joining ISIS in Syria. They had been held in US detention in Iraq, where they were among several high-profile ISIS prisoners transferred to US military custody after Turkey launched a military incursion into northern Syria in 2019, raising concerns about the security of the prisons operated by America's local Syrian allies.

In August, Attorney General William Barr informed the UK that the US would not seek the death penalty for the two in an effort to convince Britain to provide critical evidence that can be used to prosecute the operatives in US courts. Diane Foley told CNN at the time that the families were "unanimous" on the issue of dropping the death sentence in order to obtain the UK evidence and seek a stronger US trial.

In September, the UK high court ruled that evidence could be shared with the US.

In July, the Foleys, Sotloffs, Kassigs and Muellers penned a joint op-ed in the Washington Post urging the administration to bring the men to the US to stand trial.

"Like any grieving relatives, we want to know the full truth about what happened to our loved ones, and we want to see our children's murderers held accountable. These things can happen only if the suspects are put on trial before a jury in an American court of law," they wrote.

NBC was the first to report that Kotey and Elsheikh would soon be transferred.