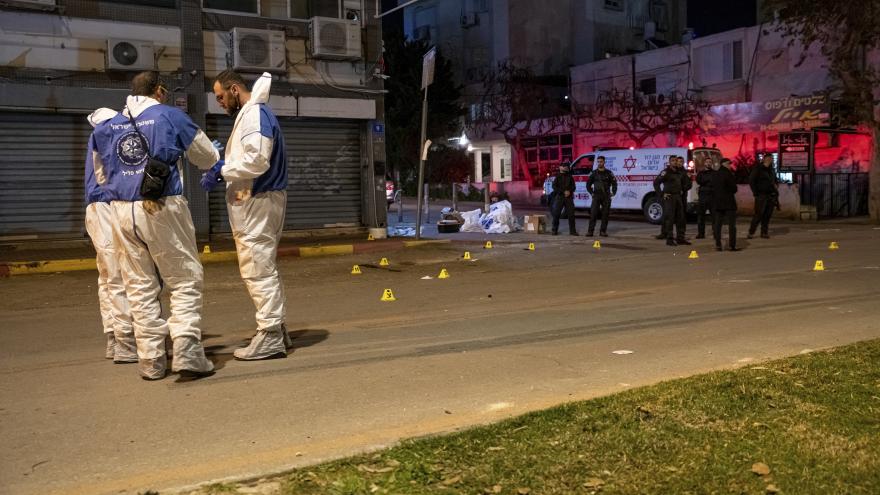 The attack — the second of its kind in a week — coincided with a landmark regional summit in Israel's Negev desert, where top diplomats from the United Arab Emirates, Bahrain, Morocco, Egypt, Israel and the United States are meeting to discuss security issues.

"We condemn today's terrorist attack in Hadera, Israel," US Secretary of State Antony Blinken tweeted on Sunday from Israel. "Such senseless acts of violence and murder have no place in society. We stand with our Israeli partners and send our condolences to the families of the victims."

ISIS has claimed responsibility for the attack, according to the SITE Intelligence Group, which quoted a post from the ISIS-affiliated Amaq news agency. Amaq posted a screengrab from a video that circulated on social media showing two masked men pledging allegiance to the leader of ISIS prior to the attack.

Amaq called the attack a "twin immersive commando attack by Islamic State Fighters," according to SITE.

The two assailants, who were shot and killed by Israeli police, were from the Arab-majority Israeli city of Umm al-Fahm in the northern district of Haifa. An Israeli police spokesperson said the operatives fired at local police in Hadera, killing two passers-by. Police said the victims were members of the border police force.

"A short while ago, two terrorists arrived on Herbert Samuel Street in Hadera and began firing at a local police force. As a result of the shooting, the deaths of 2 passers-by were determined," the spokesperson said.

"An undercover force that was at the scene sought contact and after a brief gun battle neutralized the terrorists," the spokesperson added.

The Hillel Yaffe Medical Center in Hadera said six people were injured in the attack, two of whom are in serious condition.

On Tuesday, an Arab-Israeli assailant killed four people in a stabbing attack in Israel's southern city of Beersheba before he was fatally shot by a passer-by, according to Israeli police. The assailant had previously been arrested for supporting ISIS, according to the Israeli judiciary.