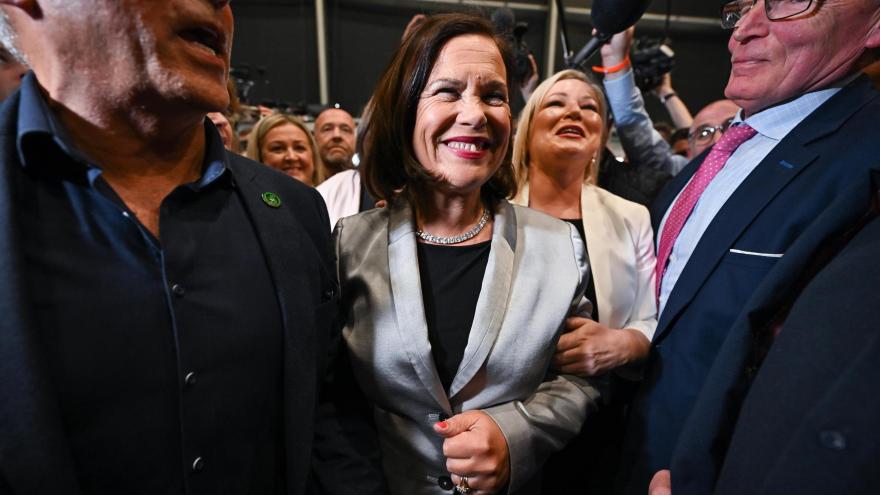 (CNN) -- Northern Ireland is on the cusp of having a nationalist leader for the first time in its history after Sinn Fein, once considered the political wing of the IRA, emerged as the largest party in regional elections.

Sinn Fein overtook the Democratic Unionist Party (DUP) in voting for the province's 90-member national Assembly, winning the most seats, 27, and securing the highest share of first preference votes. This compares with 25 seats for the DUP and 17 for the Alliance Party.

The counting of votes finished early on Sunday, with all 90 seats in the Northern Ireland Assembly now filled, according to the UK's PA media news agency.

Sinn Feinis now the largest party in the assembly and can nominate a first minister for the first time. The party is opposed to Northern Ireland being part of the United Kingdom and is in favor of a united Ireland.

"The preparation for constitutional change in Ireland needs to begin now," Sinn Fein president Mary Lou McDonald told CNN on Friday evening as results began to emerge. "We need to be alive to the fact that change is underway.

"It is my absolute determination that that change will be entirely peaceful," she added.

A clause in the 1998 peace accords, signed with the British and Irish governments after decades of deadly conflict known as The Troubles, established that a referendum on Irish unification could be held if it appears likely that the majority of voters would back it.

That day remains a distant prospect despite the results of Thursday's vote. But Sinn Fein's emergence as Northern Ireland's largest party nonetheless could force a conversation around a so-called border poll.

Sinn Fein was once closely associated with the IRA, which fought a bloody three-decade military campaign to end British rule and unite the island of Ireland, though the party has since positioned itself as a grassroots left-wing political party focused on social issues north and south of the border.

The party stands in elections to Britain's Parliament but does not take up any seats it wins. It previously had a strong showing in the 2020 general election in the Republic of Ireland.

Its success in the Northern Irish poll on Thursday was aided by a slide from the DUP, which has held the post of first minister since 2007 and briefly propped up Theresa May's Conservative government in Westminster from 2017.