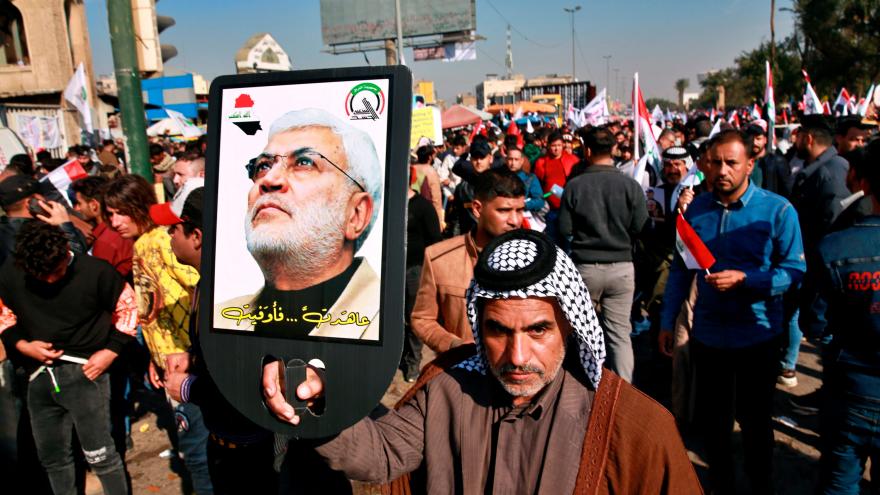 (CNN) -- A judge in Baghdad's investigative court has issued an arrest warrant for outgoing US President Donald Trump, over the killing of an Iraqi paramilitary leader during the assassination of Iranian General Qasem Soleimani last year.

Abu Mahdi al-Muhandis -- the Iraqi deputy head of the Iran-backed Iraqi Popular Mobilization Forces -- was killed along with Soleimani in a US airstrike just over a year ago, on January 3, 2020.

"After the completion of the preliminary investigation procedures, the judge decided to issue an arrest warrant for the outgoing President of the United States of America, Donald Trump," read a statement released by the Supreme Judicial Council of Iraq on Thursday.

"The investigation procedures will continue to find out the other participants in the implementation of this crime, whether they are Iraqis or foreigners," the statement added.

The Popular Mobilization Forces (PMF) is a Shia paramilitary force made up of former militias with close ties to Iran. It was recognized under a 2016 Iraqi law as an independent military force that answers directly to the prime minister.

Iran also has an arrest warrant out for Trump in relation to Soleimani's death, the semi-official Fars news agency reported Monday.

Soleimani was the architect of a growing Iranian military presence in Iraq, Syria and Yemen as the leader of the Iran Revolutionary Guards' Quds Force, an elite unit that handles Iran's overseas operations. It is considered a foreign terrorist organization by the US.

At a fundraising dinner in Florida shortly after the strike, Trump described the operation as taking out "two for the price of one." He described Soleimani as a "noted terrorist" who "was supposed to be in his country," but did not describe an "imminent threat" that precipitated the strike authorization -- the justification given by administration officials in the aftermath of the attack.

Last week, a large crowd gathered in Baghdad close to midnight (local time) for a memorial service at the site where the drone strike killed Soleimani and al-Muhandis a year ago.

Images broadcast by the PMF showed a crowd of people in an area lit by candles, where tributes were broadcast on loudspeakers and attendees chanted, "God is great, America is the great Satan."