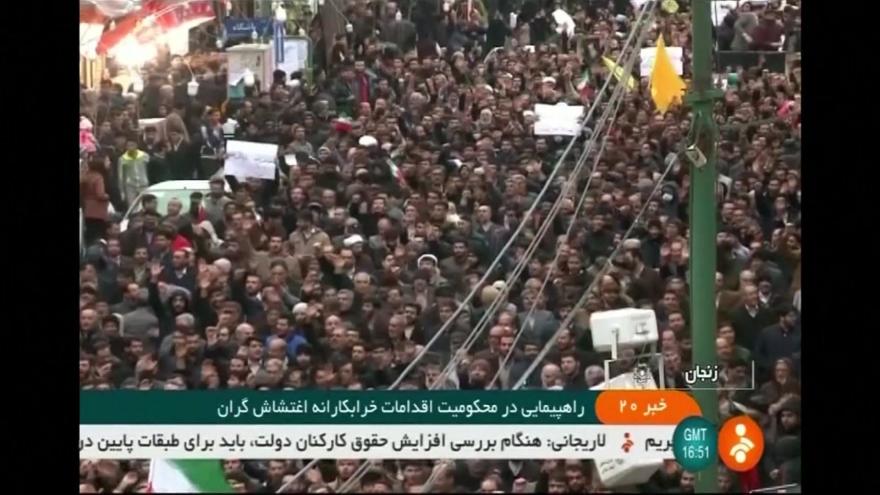 The demonstrations, the largest to strike Iran since its disputed 2009 presidential election, have seen six days of unrest across the country and a death toll of at least 20. Offering his first comments since they began, Supreme Leader Ayatollah Ali Khamenei on Tuesday accused the "enemies of Iran" of meddling in the country's affairs.

The protests began Thursday in Mashhad over Iran's weak economy and a jump in food prices and have expanded to several cities, with some protesters chanting against the government and the supreme leader, Ayatollah Ali Khamenei. Hundreds of people have been arrested and a prominent judge on Tuesday warned that some could face death penalty trials.

The towns are all in Iran's central Isfahan province, some 350 kilometers (215 miles) south of Tehran.

It wasn't immediately clear if the Revolutionary Guard member was the same fatality reported late Monday night by Iran's semi-official Mehr news agency. Mehr had said an assailant using a hunting rifle killed a policeman and wounded three others in Najafabad.

Monday marked the first night to see a fatality among Iran's security forces.

President Hassan Rouhani has acknowledged the public's anger over the Islamic Republic's flagging economy, though he and others warned that the government wouldn't hesitate to crack down on those it considers lawbreakers. All the protest rallies so far haven't received prior permission from the Interior Ministry, making them illegal under Iranian law.

In comments posted to his official website, Khamenei appeared to blame foreign nations for at least exacerbating the unrest gripping Iran.

"In the recent days' incidents, enemies of Iran utilized various means — including money, weapon, politics and intelligence apparatuses — to create problems for the Islamic system," he said.

Khamenei said he would elaborate further in the coming days.

Iran's semi-official Tasnim news agency quoted Mousa Ghazanfarabadi as saying: "Obviously one of their charges can be Moharebeh," or waging war against God. That's a death penalty offense in Iran.

Ghazanfarabadi also was quoted as saying some protesters will come to trial soon on charges of acting against national security and damaging public properties.

The protests began over Iran's economy, which has improved since the nuclear deal that saw Iran agree to limit its enrichment of uranium in exchange for the end of some international sanctions. Tehran now sells its oil on the global market and has signed deals to purchase tens of billions of dollars' worth of Western aircraft.

That improvement has not reached the average Iranian, however. Unemployment remains high, and official inflation has crept up to 10 percent again. A recent increase in egg and poultry prices by as much as 40 percent, which the government has blamed on a cull over avian flu fears, appears to have been the spark for the economic protests.