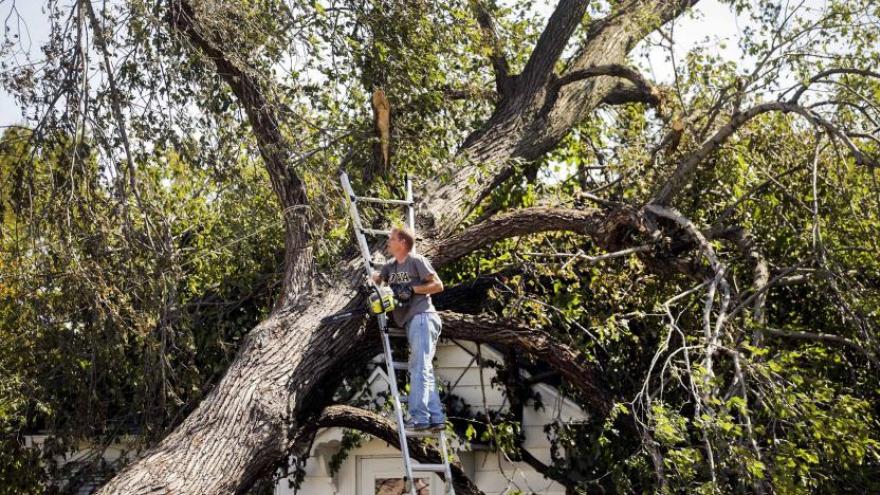 Work continues on tree and debris removal, some fallen on houses and other structures, in Cedar Rapids, Iowa, on Saturday, Aug. 15, 2020. A week later, some Iowans are still without power.

(CNN) -- Thousands remain without power, dozens are in shelters and pantries are popping up to provide food for those who've lost everything.

A week after disastrous storms, Cedar Rapids "is like a battlefield," a Desert Storm veteran said.

It was one of the hardest hit cities last week, with more than 800 buildings suffering partial collapse of the roof, walls, ceiling or floors, Cedar Rapids Fire Chief Greg Smith said. More than 20 school buildings in the city sustained damage as well.

Now, the city is still struggling to get back to normal.

The governor says it's a "major priority" to get the power back on.

President Donald Trump told officials in Iowa the state has the "full support of the federal Government" as it continues to recover from a treacherous derecho.

When asked to include the direct assistance for 27 counties, Trump said he would look into it.

Trump also claimed that the federal disaster declaration was "approved in record time" despite signing it yesterday, when Reynolds had publicly asked for aid on Friday. And that was four days after the storms ravaged the area.

"Literally it looks like the building was hit with artillery shells," Tim Kipping, who served as a Marine in Desert Storm, told KCRG as he stood in front of a decimated apartment complex where the crew said they could smell the stench of rotting food.

Jennifer Smith recalled being trapped in her car at an intersection August 10 when the winds hit.

"I threw my seat back, as I'm seeing stuff hitting my window, and I was like, 'Oh, my God,' and I was shaking," she recalled. "There were trees everywhere out there and those trees were falling down."

Winds of more than 100 mph were recorded August 10 as the line of severe storms moved through the Midwest leaving damaged homes, downed trees and more than a million without power.

While a federal emergency declaration has been approved and aid is on the way, nearly 50,000 customers remain without power throughout the state as of Tuesday afternoon, according to Poweroutage.us.

Power should be mostly restored Tuesday

Power restoration remains a high priority for many in the region who have had to throw out their groceries and endure the continuing summer heat after the storm.

Alliant Energy, the main power supplier to the state, told CNN that 81% of its homes and businesses that lost power have been restored as of 9 a.m. local time Tuesday (10 a.m. EDT). Crews from around the country and Canada are working to restore power and hope to have a majority of those still without power restored by the end of the day, said Cindy Tomlinson, a spokeswoman from Alliant Energy.

Meanwhile, makeshift food pantries have popped up around the state, with at least five opening in Cedar Rapids, according to the city's storm update resources page

Cedar Rapids resident and mother of five Pamela Smith told CNN affiliate KCRG on Monday that she had to throw out $400 worth of groceries after days without power following the storm.

"We can't afford it," Smith told KCRG. "The financial aspect is the hardest part, making sure we have enough money for everything."

At least 50 people remained in shelters in the city Monday night with more space available, the city of Cedar Rapids said in a tweet. Around 50 people were taken to the hospital for treatment following the storm.

Midwesterners helping each other

Those whose homes are still livable are trying to clear trees and other debris as they deal with continued power outages.

"In the modern era with working from home, it means we can't do anything at all because there's no internet, no nothing," Grinnell resident Adam Albright told CNN affiliate KCCI.

What has shone through following the storm is the Midwestern spirit, with neighbors helping neighbors and people jumping in to help clean up the damage.

"A lot of us will get out and make sure we're cleaning but we're really worried about the people in town who still do not have power," Grinnell resident Sarah Smith told the affiliate. "We try to make sure we're seeking those people out and get them the help they need."

Over the weekend, soldiers with the 831st Engineer Co. worked to clear downed trees so that a substation supplying power to Cedar Rapids could be reached for repair, the Iowa National Guard tweeted.

Cleanup crews from as far away as South Carolina have traveled to the state to help out, the governor said in a tweet Monday, thanking them.

Wisconsin residents Dave and Diane Lobermeier drove more than 300 miles to drop off supplies in Cedar Rapids, before taking a chainsaw to help cut up trees in the street, KCRG reported.

"It's people helping people," Dave Lobermeier told the affiliate. "It's what Midwesterners do," Diane Lobermeier added.