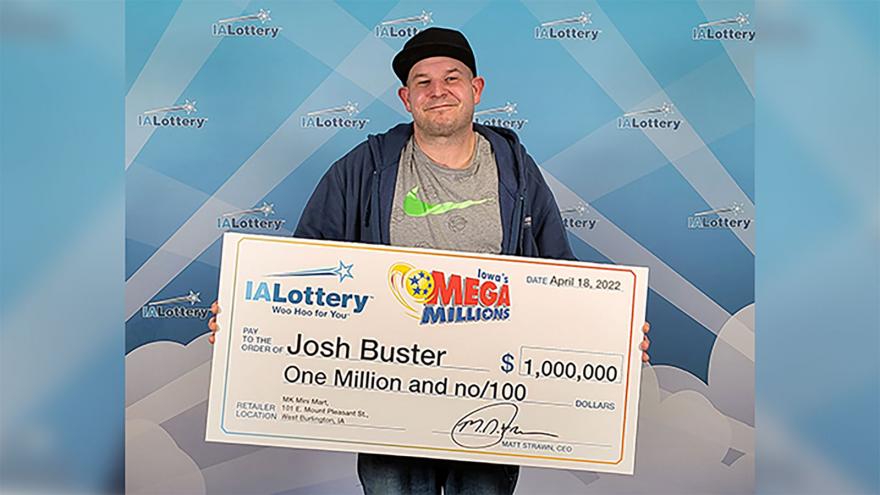 (CNN) -- An Iowa man brought home a $1 million lottery prize -- after the clerk made a mistake printing his tickets.

Josh Buster, a 40-year-old chef from West Burlington, asked for five "easy-pick" plays for the April 15 Mega Millions drawing at a convenience store, according to a news release from the Iowa Lottery.

But Buster says that the clerk initially printed just one play, and then printed the four remaining plays on a separate ticket.

"I feel like that changed the numbers that I would have gotten if he had put them all on one instead of making that mistake," Buster said in a news release from the Iowa Lottery.

Buster struggled to believe his luck at first.

"I don't usually have good luck, so I thought it was a mistake and there was going to be an error," he said in the news release. "So I Googled the lottery numbers to make sure I had the right ones, and I did! And then the rest of the day, I'm just waiting to wake up from a dream."

The winning chef will use his prize money to pay off his car, pay off his mother's mortgage, and save for his retirement.

"It will take away a lot of my stress in my life -- no more of the financial worries," he told the Iowa Lottery.

The odds of winning the $1 million prize in the Iowa Lottery's Mega Millions game are just 1 in 12,607,306, according to their website.