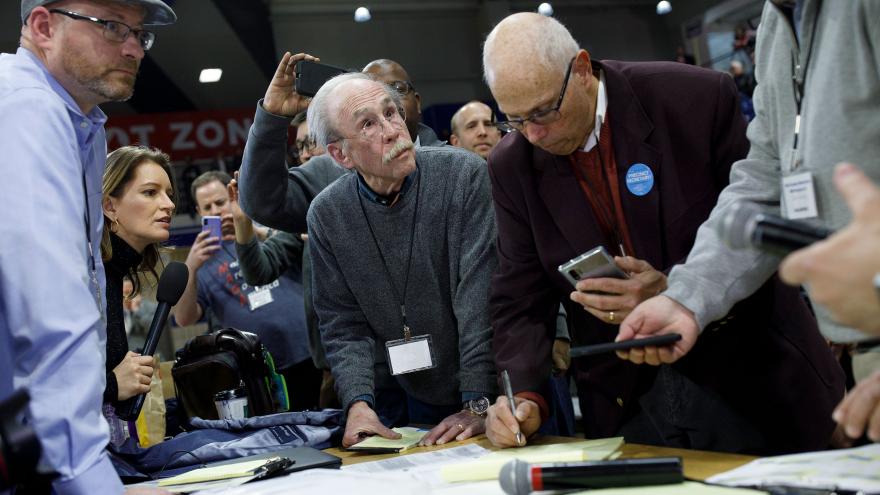 Prior to the initial release, the chairman of the state Democratic Party, Troy Price, apologized for the delay in the caucus results of the Iowa, saying there was a problem with the "back end" in reporting the data, but ensuring that the data itself was accurate.

"The reporting of the results and circumstances surrounding the 2020 Iowa Democratic Party caucuses were unacceptable. As chair of the party, I apologize deeply for this," Price said.

"The bottom line is that we hit a stumbling block on the back end of the reporting of the data, but the one thing I want you to know, we know this data is accurate," Price said.

The final outcome of the Iowa Democratic caucuses remains unknown, with the state party continuing to delay the reporting of the results after a night of confusion and chaos rocked the critical first-in-the-nation 2020 contest.

Hours after caucusing began in Iowa on Monday, local officials raised concerns about the vote reporting, raising difficulties in using the new app to report their results and complaining about long hold times to report results by phone.

On Tuesday, the candidates had already moved on to New Hampshire, the next state on the 2020 calendar -- as they tried to spin the lack of results in favor of their own campaigns.In Iowa, meanwhile, state Democrats were sorting through the wreckage of an embarrassing night while working to report the first official results.

Price said in a statement Tuesday morning that the plan is to release results "as soon as possible today" and said an investigation found the "underlying data" collected by the new app was sound.

"As part of our investigation, we determined with certainty that the underlying data collected via the app was sound. While the app was recording data accurately, it was reporting out only partial data. We have determined that this was due to a coding issue in the reporting system. This issue was identified and fixed. The application's reporting issue did not impact the ability of precinct chairs to report data accurately," Price said.

"While our plan is to release results as soon as possible today, our ultimate goal is to ensure that the integrity and accuracy of the process continues to be upheld," Price added.

A Democratic source told CNN that the issue seemed to lie with a major coding error in the app that was discovered once data started flowing into the Iowa Democratic Party. Party officials began to see discrepancies in the three data streams: how voters had first aligned with candidates at their caucus sites; the final alignments after those short of 15% support were eliminated at each site; and the state delegate equivalents won at each site.

The source said that it took time for party officials to identify the issue, and noted that there was not a problem with the raw data that was being put in by individual precincts.

Polk County Democratic Chairman Sean Bagniewski told CNN that tests of the app last week did not go entirely smoothly. Last Thursday, Bagniewski advised precinct chairs who couldn't get the app to work to call in their results to the Iowa Democratic Party.

He said early Tuesday morning that he had boxes of results filed away at Polk County Democratic headquarters, but that some of his precinct chairs had still not been able to report them because of app errors and long hold times on the phone with the state party -- with some calls being dropped.

Former Vice President Joe Biden's campaign has been most aggressive in challenging the legitimacy of the results in Iowa due to the long delays. In a letter to the state party Monday night before the first phone call with campaigns, Biden's general counsel Dana Remus wrote that "the campaigns deserve full explanations and relevant information regarding the methods of quality control you are employing, and an opportunity to respond, before any official results are released."

Kate Bedingfield, Biden's communications director, told CNN's John Berman on Tuesday morning, "We have real concerns about the integrity of the process, and I think there were some significant failures in the process last night that should give voters concern."

"If you have a process where you can't be confident that the results that are being reported are reflective of the votes that people cast last night in the process, that's a real concern," Bedingfield said.

Other Democratic presidential candidates have attempted to put their own spin on the delay.

Former South Bend, Indiana, Mayor Pete Buttigieg declared victory while speaking to supporters on Monday night: "By all indications, we are going on to New Hampshire victorious."

In an interview with CNN the next morning, Buttigieg cited his campaign's internal data from the caucuses.

"It sounds to me like the vice president didn't do as well as he hoped. And I think to question the legitimacy of the count is wrong. I know Iowa well. Those people do not cheat," Dean said

Biden addressed supporters Monday night and said, "Our indication's it's going to be close, we're going to walk out of here with our share of delegates. We don't know exactly what it is yet, but we feel good about where we are. And look, so it's on in New Hampshire, Nevada, South Carolina, and well beyond, we're in this for the long haul."

Minnesota Sen. Amy Klobuchar was first to appear publicly and speak to supporters. She told the crowd, "We know there's delays, but we know one thing: We are punching above our weight."

Vermont Sen. Bernie Sanders said Monday night to supporters, "When those results are announced, I have a good feeling we're going to be doing very, very well here in Iowa." Sanders' campaign, like Buttigieg's, also pointed to internal campaign data to spin the caucuses in his favor.

Massachusetts Sen. Elizabeth Warren said Monday night, "Tonight, we are one step closer to winning the fight for the America we imagine is possible."