Investigators are still working to figure out why a shooter killed 2 people at an Oregon Safeway. Here's what we know 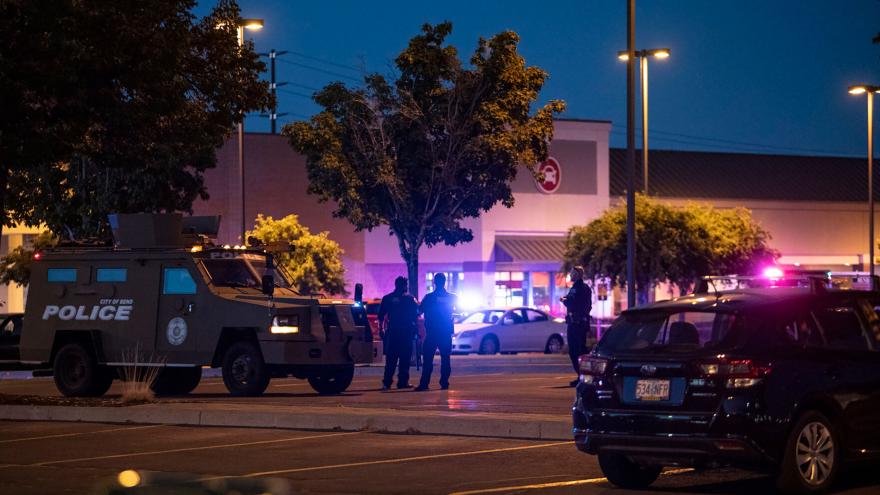 (CNN) -- As shoppers at a grocery in Bend, Oregon, meandered down aisles and considered produce choices Sunday night, a 20-year-old gunman burst into the Safeway store and began firing, killing two people and injuring at least two others.

Police responded to the Forum Shopping Center around 7 p.m., authorities said. Rushing in, they could hear gunshots, then discovered the shooter dead from a self-inflicted gunshot wound. He'd entered wielding an AR-15-style rifle and a shotgun after firing in the parking lot, officials said.

It was yet another American shooting in which a young man with such a rifle unleashed carnage at a place usually considered safe -- a New York supermarket, a Texas elementary school and a Fourth of July parade in Illinois.

The gunman was identified by police as Bend resident Ethan Blair Miller. As investigators work to uncover his motive, here's what we know about the shooting.

How the attack unfolded

He then began firing an AR-15-style rifle as he crossed the parking lot. Upon entering the store, he shot 84-year-old shopper Glenn Edward Bennett, who died on the way to the hospital.

The shooter kept moving through the store and firing, Miller said. In the produce department, Safeway employee Donald Ray Surrett, Jr., 66, confronted the gunman and was fatally shot, she said.

Gunshots were being fired as they burst into the Safeway, Miller said. Almost immediately, officers found the gunman dead from a self-inflicted gunshot wound, she said.

Close to the shooter's body, they found the rifle and shotgun, police Chief Mike Krantz said. Investigators also found three Molotov cocktails and a sawed-off shotgun in his car, along with additional ammunition in his apartment, according to officials. Police are working with the ATF to determine if he possessed the firearms legally.

There were reports of two people with non-life-threatening injuries, Miller said. It's unclear to police how many people were in the store during the attack.

As the gunman made his way through the store, Surrett attacked and tried to disarm him but was shot and killed, Miller said. Surrett's quick action likely saved lives, officials have said.

"While we are still gathering the facts about last night's shooting, it's clear that far more people could have been killed if not for the heroism of Donald Ray Surrett, Jr., who intervened to help stop the shooter, and the officers who entered while shots were still being fired," Gov. Kate Brown said in a statement.

"In the face of senseless violence, they acted with selfless bravery. Their courage saved lives," Brown said.

Other employees were working a closing shift in the deli when they heard loud gunfire, said one who identified himself only as Robert to the Central Oregon Daily News.

"Me and three other employees ran into a walk-in refrigerator and closed the door and stayed there and stayed hidden until authorities arrived," he said.

Josh Caba and his four children were shopping when the shots broke out, he told CNN affiliate KTVZ.

"We started heading to the front. Then we heard I don't know how many shots out front -- six or seven. I immediately turned to my children and said, 'Run!' People were screaming. ... it was a horrifying experience," Caba said.

Caba worried about his wife, who'd stayed in the car because she wasn't feeling well.

But when he and three of his children fled through exit doors by the produce department, he found she'd driven to the back of the store and was "sitting in the car, saying 'Get in the car! Get in the car!'" KTVZ reported.

Caba then rushed back into the store and found their fourth child, he said.

Plans appeared to be posted online

The shooter may have posted information online regarding Sunday's shooting, as well as plans for future shootings -- but did not share any details, police have said.

"We have no evidence of previous threats or prior knowledge of the shooter," Miller said. "We received information about the shooter's writings after the incident had taken place and the shooter has no criminal history in the area."

CNN has identified blog entries appearing to belong to Ethan Miller published on the site "Wattpad" detailing a plan and reasons for the shooting. The posts were made public Sunday evening by an anonymous account and viewable for 12 hours, according to Wattpad. The posts have since been removed.

The first blog entry was headlined June 29 and signed with the name Ethan. The writer of the post blamed Covid-19 and quarantine for worsening their mental health.

Initially, this person planned a shooting inside a high school on September 8, according to the posts.

More than 35 posts were made by the same account on the blogging site. Most of the posts indicated a desire to commit violence.

One post referenced being "partially inspired" by the Columbine High School shooting.

In other posts signed with the name Ethan, several reasons were cited for the writer turning into a "ticking time bomb," including their family and love life, which was detailed in a post headlined July 8.

The writer mentioned buying a shotgun and an AR-15 for the shooting and said they hoped to kill over 40 people. Throughout the posts, other mass shootings were also referenced.