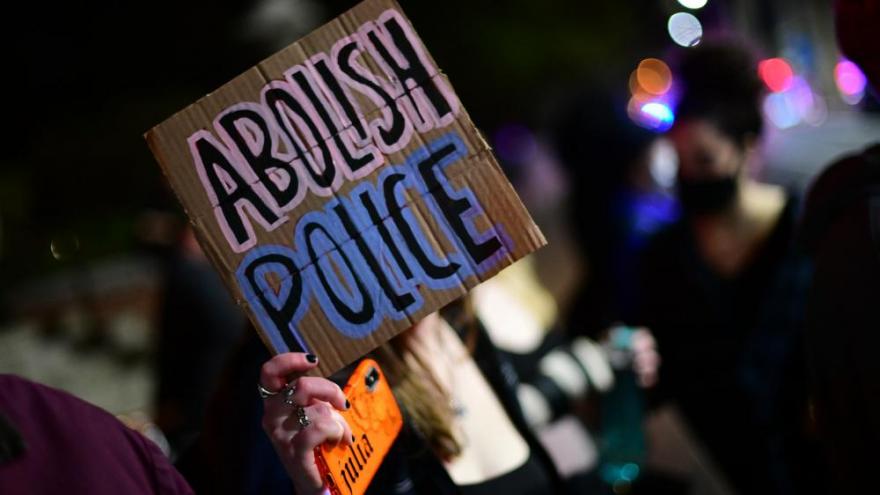 According to preliminary year-end data provided to CNN by the FBI, 73 officers died in felonious killings in the line of duty in 2021, and pictured, a placard displayed during a protest march on April 12, 2021, in Philadelphia states "ABOLISH POLICE."

(CNN) -- Last year saw the highest number of law enforcement officers who were intentionally killed in the line of duty since the terrorist attacks of Sept. 11, 2001, an increase that comes as a rise in gun violence and homicides continues across the country.

According to preliminary year-end data provided to CNN by the FBI, 73 officers died in felonious killings in the line of duty in 2021. The year marks the highest total recorded by the agency since 1995, excluding the 9/11 attacks.

Gunfire has consistently been the leading cause of felonious officer deaths each year -- and 2021 was no different. The FBI has not released its full end-of-year breakdown but reported that 55 officers were killed by gunfire in 2021 through the end of November, up from 39 in the same time frame in both 2020 and 2019.

Homicides rose in 2020, a year marked by a global pandemic and the murder of George Floyd by a Minneapolis police officer and subsequent unrest. In its 2020 UCR report, the FBI noted that an increasing number of homicides were committed with a gun. For many cities, the elevated rates of homicide continued into 2021.

More than two-thirds of the country's 40 most populous cities saw more homicides last year than in 2020, according to a CNN analysis of police department data, and 10 of those cities recorded more homicides in 2021 than any other year on record.

"When homicides go up, more shootings go up, and it contributes to an overall increase in violence and police officers find themselves in the middle of that environment," said Chuck Wexler, the executive director of the Police Executive Research Forum (PERF).

Covid-19 still the leading cause of officer deaths

Maria Haberfeld, chair of the Department of Law, Police Sciences, and Criminal Justice Administration at John Jay College, who has analyzed data on police deaths in the line of duty, says that a rise in violence against police officers is a phenomenon that happens "every few years" because of an event that serves as a catalyst.

Typically, she said, the uptick is tied to a high-profile case in which an officer or department is accused of misconduct and then that "spills over to all the other police officers around the country."

The 73 felonious deaths reported by the FBI are a 59% increase from 2020's total of 46, breaking the previous high of 72 felonious killings in 2011. According to the FBI, at least eight police officers also lost their lives in premeditated, ambush-style attacks last year.

The FBI classifies a death as a "felonious killing" when an officer is "fatally injured as a direct result of a willful and intentional act by an offender." Separately, 56 officers were killed accidentally while in the line of duty last year, up from 46 in 2020.

Felonious killings were not the No. 1 cause of death for law enforcement officers in 2021: For the second year in a row, that was Covid-19. According to the Officer Down Memorial Page, a non-profit dedicated to memorializing fallen officers, the total number of officers who died in the line of duty in 2021 was the highest on record, driven by Covid-19. The group reported 336 Covid-19 deaths among line-of-duty officers in 2021, a 32% increase from the 254 officers who died from Covid-19 in 2020.

"As tragic as this is to see this increase in felonious assaults against police officers, more officers will die of Covid than will be stabbed, shot, or die in traffic accidents and many of those deaths are preventable," said Wexler of PERF, a national police research and policy organization that advises police leaders on best practices.

There was an increase in 'unprovoked' attacks

In late 2021, two Bradley, Illinois, police officers were shot while responding to a call about dogs barking in a hotel parking lot -- Sgt. Marlene R. Rittmanic died from her injuries and Officer Tyler J. Bailey was hospitalized in critical condition.

In Baltimore, Officer Keona Holley died last month after being shot while sitting in her patrol car. Two suspects were charged with attempted murder in the shooting of Holley after they confessed to the crime, but their motive remains unclear, said Baltimore Police Commissioner Michael Harrison.

The FBI told CNN that they are currently conducting an analysis on this sharp rise in reports of unprovoked attacks, which they say are not concentrated in any one region of the country.

The FBI's Law Enforcement Officers Killed and Assaulted (LEOKA) data collection program refers to an ambush as an "entrapment and premeditated" attack, while unprovoked is classified as an attack "not prompted by official contact at the time of the incident," according to the agency.

According to Christopher Herrmann, an assistant professor at John Jay College of Criminal Justice, while the significant increase in unprovoked and ambush attacks last year may indicate that police officers are at a higher risk than previous years, there is also disagreement among law enforcement about when such terms should be used. A lack of a universally accepted definition can lead to difficulties in studying ambushes and developing training and operational practices based on "lessons learned from past ambush responses," he added.

It's not yet clear if the Bradley, Illinois, shooting, or Holley's death would be classified as an unprovoked attack or an ambush by the FBI.

Herrmann said the lack of a clear definition for both terms has significant consequences, as law enforcement "may have difficulty articulating the nature of the threat, making it hard for agencies to train officers to recognize and respond appropriately to ambush situations."

Low confidence and a climate of animosity

In the wake of protest movements following the killings of Black Americans by police, confidence in US police dropped to record lows, according to a report released by Gallup in August 2020. The polling group reported in 2021 that some of these perceptions have slightly rebounded, but stark racial and partisan divides remain in how Americans view the police. Confidence among both Black and White adults in police remains lower than they were before the killing of Floyd.

Whether there's a connection between low police confidence and heightened animosity to officer killings is not clear, but Haberfeld says that coverage of anti-police sentiment has been more sustained than in previous years.

"There is an overall climate now that is very anti-police, which adds a different angle to what used to happen periodically to police in the past years," she told CNN. "The anti-police climate would surge after a high-profile case, and usually after a month or so it would subside. But right now, we're talking about over a year of high-profile, anti-police coverage."

Herrmann of John Jay said there isn't an easy fix to the animosity toward police officers.

"Police officers are tasked with rebuilding these relationships with their communities that have been fractured as a result of the Floyd protests and as a result of the over-policing, racial profiling, and high-profile killings of Black people," Herrmann said.

Officer Holley was removed from life support late last month after she was shot while sitting in her patrol car. Commissioner Harrison said in a statement announcing her death that Holley's "strength, courage and resilience are an inspiration to us all." In an interview with CNN, Harrison said the officer's death had an "extremely negative ripple effect" throughout the police department and the community she served.

Harrison said the assailant "apparently walked up somewhere from the rear of the (police) vehicle or alongside the vehicle and began firing into the vehicle, striking our officer." Holley then accelerated the patrol vehicle and crashed, officials said.

"It's one negative ripple effect for having been killed in the line of duty, but to have been ambushed while sitting in your car is something totally different," Harrison said.

Holley's funeral took place on Tuesday in Baltimore. The Baltimore Sun reported that hundreds of people showed up to pay their respects, including many law enforcement members from out of state.

Harrison said many of his officers had to take time off after Holley's killing, which added an additional challenge to a department that was grieving but also short staffed. According to the commissioner, his leadership role is to ensure the department can be resilient while in the grieving and mourning process.

"We have to provide resources for our officer wellness program, through our chaplaincy program, to make sure our members are mentally and emotionally and spiritually sound to go back to work and to continue working," he said.