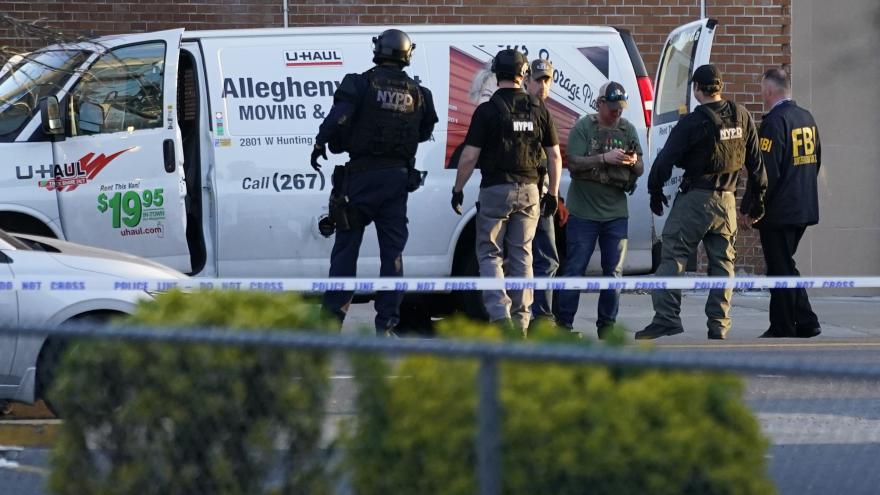 The man who police described as a "person of interest" in Tuesday's Brooklyn subway shooting is now being considered a suspect, the NYPD said on Wednesday.

A $50,000 reward is being offered for information on James.

An intensive hunt is underway for the man who set off smoke grenades and fired a handgun 33 times on a crowded subway train in Brooklyn, New York, during Tuesday morning's rush hour, wounding passengers and setting off a panicked scramble.

Investigators have named a "person of interest" they believe rented a U-Haul van that has been connected to the attack that started in the train on its way to the 36th Street subway station in Brooklyn's Sunset Park -- an incident that authorities said left 29 people injured, including 10 shot.

The person who police believe rented the van, Frank James, 62, has not been named as a suspect. James has addresses in Wisconsin as well as Philadelphia, where the U-Haul was rented, NYPD Chief of Detectives James Essig said.

"The keys to that U-Haul van was found in the subway in our shooter's possessions," Essig said. "We don't know right now if Mr. James has any connection to the subway. That's still under investigation."

James and his family did not immediately respond to CNN's request for comment.

The U-Haul was recovered near the station and has been cleared by the NYPD's bomb squad, police said. The van will be transported to a forensic location where federal and local authorities can go through the vehicle in a controlled environment, a senior law enforcement official told CNN.

The gunman fired at least 33 times and struck 10 people, according to Essig. Overall, 29 people were hospitalized in connection with the shooting with injuries that included gunshot wounds, smoke inhalation or from falling while trying to escape, officials said.

None of the injuries appear to be life-threatening, NYPD Commissioner Keechant Sewell said.

"We know this incident is of grave concern to New Yorkers," Sewell said. "We cannot lose sight of victims in this city. We will use every resource we can to bring those to justice who continue to prey on the citizens of New York."

The motive of the shooting is not yet known. The attack is not being investigated as an act of terrorism but authorities have not ruled out anything, Sewell said, adding the victims have a variety of backgrounds.

Two officials told CNN they believe the gun jammed during the shooting.

A credit card that was used to rent the U-Haul was also found, two law enforcement sources told CNN.

A $50,000 reward for information leading to the arrest of the suspect has been offered, according to a statement from the Metropolitan Transportation Authority, which put up the money with the Transport Workers Union Local 100 and the New York City Police Foundation.

Service via the D, N and R subway lines has been restored to the 36th Street subway station and is "running with delays," the MTA said early Wednesday. Commuters were riding a Manhattan-bound N train as it neared the station when the shooting started.

People who were in the train car described smoke filling the car, and then gunshots as panicked and confused people tried to push their way to one end.

Hourari Benkada, 27, who was shot in the back of the knee, said he thinks he was sitting next to the shooter.

Recalling the incident from a hospital bed where he was recovering Tuesday, Benkada said he'd gotten into the last car of the N train and sat next to a man with a duffel bag who appeared to be wearing an MTA vest.

The man let off a "smoke bomb," said Benkada, a housekeeping manager at the New Yorker Hotel.

"And all you see (is) smoke -- black smoke ... going off, and then people bum-rushing to the back," Benkada said. "This pregnant woman was in front of me. I was trying to help her. I didn't know there were shots at first. I just thought it was a black smoke bomb.

"She said, 'I'm pregnant with a baby.' I hugged her. And then the bum-rush continued. I got pushed, and that's when I got shot in the back of my knee."

The shooting started about 20 seconds after the train took off, and felt like it lasted for nearly 2 minutes, Benkada said.

Benkada heard other people in pain, but couldn't see them or the suspect because of the smoke, he said.

Evidence collection for the incident "will take some time," according to Michael Driscoll, assistant director in charge of the FBI's New York field office. He added that he was grateful for the residents and eyewitnesses who have already stepped forward with information.

Investigators have cell phone video from an eyewitness that shows the suspect, a law enforcement source told CNN.

Within the station, surveillance video may not be available. A preliminary review indicates there was some sort of malfunction with the camera system at the station, Mayor Eric Adams told WCBS Radio.

"We're going to work with the NYPD to capture all that video to find out where this criminal may have come in or out of the system," Lieber said. "And we're also just reviewing with everybody who is involved, all of the information."

James, described as a person of interest by the NYPD, has been linked to multiple rambling videos posted on a YouTube channel. A screenshot from one of the videos was used on an NYPD Crimestoppers flyer seeking information about the shooting.

James talked about violence and mass shootings in the videos, including one uploaded Monday in which he said he's thought about killing people who have presumably hurt him.

"I've been through a lot of s**t, where I can say I wanted to kill people. I wanted to watch people die right in front of my f**king face immediately. But I thought about the fact that, hey man, I don't want to go to no f**king prison," he said.

In another video posted last week, James, who is Black, rants about abuse in churches and racism in the workplace, using misogynistic and racist language.

Many of the videos that James uploaded included references to violence, including at a set group of people he believed had maligned him, in addition to broad societal and racial groups that he appeared to hate.

In another video posted last month to the same channel, James said that he had post-traumatic stress. In that video, James said he left his home in Milwaukee on March 20. During the trip eastward, he said he was heading to the "danger zone."

"You know, it's triggering a lot of negative thoughts of course," he said in the video. "I do have a severe case of post-traumatic stress."