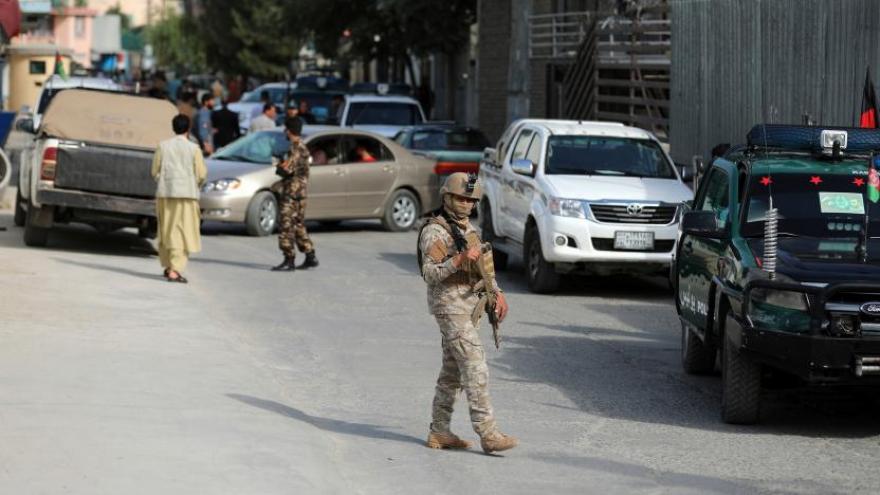 Kabul could be isolated by the Taliban in the next 30 to 60 days, according to a senior administration official familiar with one US intelligence assessment, and pictured Afghan security personnel in Kabul, Afghanistan, on Aug. 6.

(CNN) -- Kabul could be isolated by the Taliban in the next 30 to 60 days, increasing the potential that the Afghan capital could fall under the control of the militant group, according to a senior administration official familiar with one US intelligence assessment.

Another assessment puts the potential collapse within 90 days, according to another US official.

Officials warn that there are multiple assessments with differing timelines.

However, such a collapse would represent a stunning defeat after the United States' costly two-decade military campaign in Afghanistan. It would likely lead to the fall of the Afghan government and could imperil the US' diplomatic presence on the ground, which Biden administration officials have vowed to maintain even after the troop withdrawal is complete.

Pentagon spokesperson John Kirby said he would not comment on any intelligence "assessments coming out of Afghanistan," at the beginning of a news briefing at the Pentagon on Wednesday.

"We continue to monitor the situation in Afghanistan closely," Kirby said. "We are mindful of the deteriorating security situation, and our focus right now remains on supporting the Afghan forces in the field where and when feasible we can from the air, as well as completing our drawdown in a safe and orderly way."

There is currently no indication that the US will evacuate its embassy. As CNN reported Tuesday, State Department officials are discussing a further drawdown of US embassy personnel, according to two sources familiar with the conversations, as the Taliban continue to gain ground in Afghanistan.

"Obviously it is a challenging security environment," State Department spokesman Ned Price said on Tuesday, adding that the US posture at the embassy has not changed at this moment. "We are evaluating the threat environment on a daily basis."

The Taliban gains -- which have occurred much more rapidly than many US officials expected -- have made the situation more urgent and sped up the conversations that have been happening for some time now, one source said.

The Taliban have overrun ten provincial capitals, including Kunduz, since Friday. Their capture of areas of the Baghlan province, which lies to the north of Kabul, has caught the attention of the US because the location is considered essential for the defense of the capital, according to the administration official.

This official said "conversations need to be had on the way ahead" for the US presence, but there are no signs that President Joe Biden is reconsidering his decision on a full withdrawal of US forces from Afghanistan by the end of August.

Biden indicated on Tuesday that his plans for that withdrawal have not changed, saying, "We spent over a trillion dollars over 20 years. We trained and equipped with modern equipment over 300,000 Afghan forces. And Afghan leaders have to come together. We lost thousands -- lost, death and injury, thousands of American personnel. They've got to fight for themselves, fight for their nation."

"I think they are beginning to realize they have got to come together politically at the top. But we're going to continue to keep our commitment, but I do not regret my decision," he added.

Kirby echoed that sentiment in comments on Wednesday and pushed back on the suggestion that the US is "passing the buck" for the deteriorating situation on the ground. "Nobody's passing any bucks," he said at the Pentagon briefing.

The Pentagon spokesperson added that he takes "exception to the notion that somehow over the course of 20 years we simply failed in trying to improve the competency and the capability of Afghan forces when we look at what they're doing today. It comes down to leadership on the battlefield and leadership in Kabul."

Any current "issues of leadership" in Afghanistan, he said, are "issues that Afghan leaders both military and political need to be able to address."

Afghan Foreign Minister Mohammad Haneef Atmar said Wednesday that the government has mostly been proud of its national security forces "but there have been performances in certain areas that we are not so proud of."

"This has very little to do with the courage of our national security forces," he said. "It is more related to the structures of support, and especially close air support -- the absence of which actually led to the diminishing capability of our forces to put up resistance."

Atmar said that Afghanistan is "probably experiencing the most massive, brutal and opportunistic military campaign, a campaign of violence and terror by the Taliban, ever in the history of our country."

He said that surge of violence began after Biden and NATO in April announced the unconditional withdrawal of their forces.

"We've lost already since mid-April over 6,000 people -- 4,000 of them of our brave national security forces and over 2,000 from the civilians," Atmar said in a conversation with the Australian Strategic Policy Institute. "The number of wounded would come to over 15,000 over the past couple of months. This is the highest figure we have ever experienced over the past two decades."

Price said the levels of violence by the Taliban "are unacceptably high" and "inconsistent with the letter and the spirit" of the 2020 agreement forged between the United States and the Taliban.

Despite these acknowledgments, Price and other administration officials have continued to push for a political settlement between the Afghan government and the Taliban. The top US diplomat for Afghanistan, Zalmay Khalilzad, traveled to Doha this week "to help formulate a joint international response to the rapidly deteriorating situation in Afghanistan," the State Department announced Monday.

But Khalilzad conceded last week that the Taliban feel "emboldened" by their recent military gains in the country, and Price said Wednesday that progress on a political settlement "has been painfully slow."