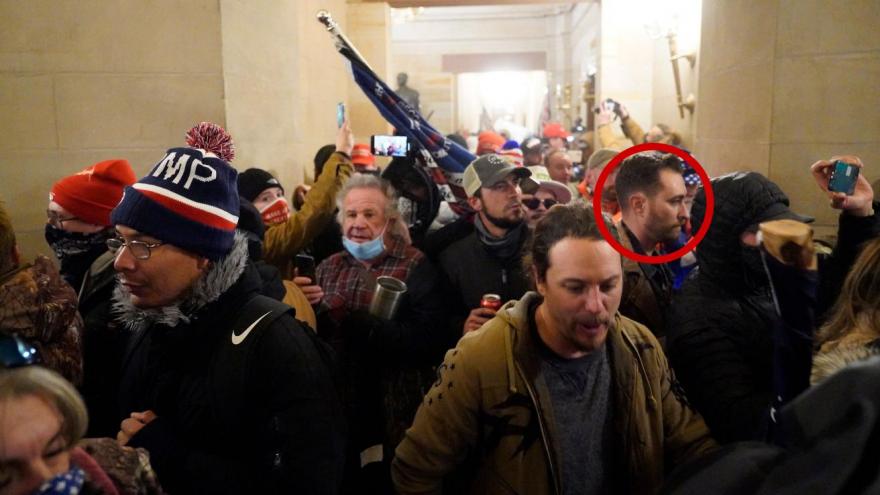 CNN has highlighted Nick Ochs in a crowd of protesters storming the Capitol building during a joint session of Congress on January 6, 2021.

(CNN) -- The mob of Trump supporters who stormed the US Capitol on Wednesday included conspiracy theorists linked to QAnon and the Proud Boys -- two right-wing extremist factions that President Donald Trump repeatedly refused to condemn during his election campaign last year.

The insurrection at the heart of America's democracy, egged on by Trump's rhetoric, represented a stunning show of force for the fringe movements and their adherents. Four people were left dead during the mayhem, according to the Washington, D.C. Metropolitan Police Department, including one woman shot by a U.S. Capitol Police officer and three other people who had medical emergencies.

One of the most recognizable figures in the videos and photos of the chaos on Capitol Hill was a man in his 30s with a painted face, fur hat and a helmet with horns.

The protester, Jake Angeli -- known by followers as the QAnon Shaman -- quickly became a symbol of the bizarre and frightening spectacle as photos circulated of him roaming the Capitol halls holding an American flag affixed to a spear in one hand and a bullhorn in the other, and even standing shirtless atop the Senate dais.

Angeli, who lives in Arizona, couldn't be reached for comment, but his cousin, Adam Angeli, confirmed that the man in the horns was his relative in a brief call with CNN Wednesday. Adam Angeli said he thought his cousin might be between jobs and that "he's a patriot, he's a very big United States of America type of a person."

Jake Angeli's Facebook page is filled with posts evoking the conspiracy theories of QAnon, whose adherents believe in a ludicrous theory that there is a cabal of Satan-worshipping pedophiles who have infiltrated the highest reaches of American government and are being opposed by President Trump.

Some of Angeli's Facebook posts have a violent edge, such as a meme declaring "we shall have no real hope to survive the enemies arranged against us until we hang the traitors lurking among us." One photo on Angeli's Facebook page depicts him adorned in the fur and horns, taking aim towards the camera with a rifle.

In recent months, Angeli has been a regular presence at pro-Trump protests in Arizona, including demonstrations outside the Maricopa County vote-counting center.

Other rioters photographed at the Capitol wore clothing with QAnon icons and held signs with slogans associated with the bizarre movement.

The rioters who filled the Capitol also included Nick Ochs, the founder of Proud Boys Hawaii, a chapter of the far-right group. "Hello from the Capital lol," Ochs tweeted Wednesday, with a selfie of himself smoking a cigarette in the building.

"We didn't have to break in, I just walked in and filmed," Ochs told CNN in an interview Wednesday night. "There were thousands of people in there -- they had no control of the situation. I didn't get stopped or questioned."

Ochs ran an unsuccessful campaign for the state legislature last year, winning an endorsement from Trump confidant Roger Stone, who recorded a video with him. He claimed in the interview with CNN that he was working as a professional journalist when he entered the Capitol, and that he didn't go into any congressional offices or the chambers.

A far-right activist who was at the Capitol Wednesday was Tim Gionet, who livestreamed video of himself inside the building for more than 25 minutes, according to multiple screenshots of the recording shared on Twitter.

Gionet, a prominent extremist voice who goes by the pseudonym "Baked Alaska" online, attended the 2017 "Unite the Right" rally in Charlottesville, Virginia, said Hannah Gais, a senior researcher with the nonprofit Southern Poverty Law Center. Gais said she monitored the livestream as it was airing.

Gionet has been suspended or barred from various online platforms. He could not be reached for comment.

One of the most widely shared photos from the chaos showed Richard "Bigo" Barnett, the leader of a pro-gun rights group in Gravette, Arkansas, lounging in House Speaker Nancy Pelosi's office with his feet up on a desk.

Barnett, 60, later showed reporters outside the Capitol an envelope that he said he took from Pelosi's desk. "I didn't steal it," he said of the envelope, which was addressed to another member of Congress, in a video posted on Twitter by a New York Times reporter. "I put a quarter on her desk even though she ain't f**king worth it." He said he also left a note on her desk that said "Nancy, Bigo was here you b*tch" and claimed that he was Maced.

Facebook videos that appear to have been posted by Barnett on Wednesday show him walking near the Capitol. A photo posted that morning, where he is carrying an American flag, was captioned, "it's time," and he previously asked for prayers "as we do our best to protect our patriots in DC."