Inspired by a sick customer, a diner owner enlists volunteers to feed those who can't make it to her restaurant 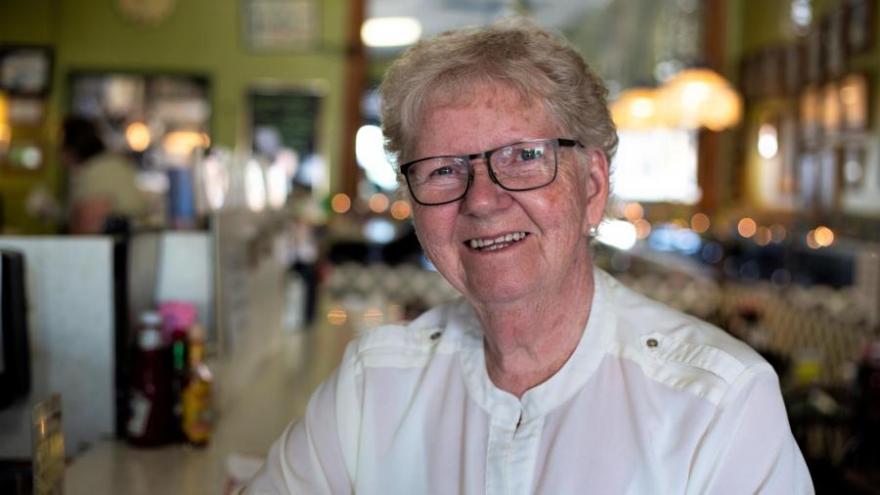 (CNN) -- Ruth Henricks has served thousands of customers at her small diner, but she will never forget one man who walked into The Huddle 30 years ago.

"(He) was very thin, looked kind of sick, and he told me he was living with AIDS," she recalled.

The United States was in the midst of an AIDS epidemic in 1989, when the reported number of cases reached 100,000, including nearly 60,000 deaths, according to the CDC.

Scott became a regular at Henricks' diner, and she would ask him about his health. Some days, he was too weak to feed himself. He told Henricks the only time he ate was at her diner.

Then, after about a year and a half, Scott stopped showing up.

"If I would have had the foresight, I could have asked him for his address or phone number. I could have taken him food. I knew what he liked to eat."

Henricks tried to find him, to no avail. She was heartbroken, but she realized she could help others like Scott.

That was the start of her nonprofit, Special Delivery San Diego, bringing homecooked meals to people living with AIDS.

She banded together volunteers, many of whom were regular patrons of her diner. They cooked meals at the diner and delivered lunch and dinner to 75 people a day.

By 1996, Henricks expanded her mission to help anyone living with a chronic illness, including cancer and kidney disease. The organization purchased a space next to the diner so it could feed more people in need.

To date, the group says it has served nearly 6,000 chronically-ill people and made more than 1 million meals.

Clients are referred by social workers or doctors and receive three meals, five days a week. Many recipients are bedbound; some are living below the poverty line, Henricks said.

Alden Steffes started receiving meals from Special Delivery in 2010. He contracted HIV in 2008, and it turned into full-blown AIDS.

"I can't cope on my own," Steffens said. "I can't cook. I'm just drained. I probably would be dead if it wasn't for Special Delivery and the food."

For Steffens, who lives alone, the food isn't the only benefit of Special Delivery.

"It's a joy every day when they ring the bell," Steffes said. "It's instant healing, even if you were sick five minutes before. They smile and they treat you like a wonderful equal."

The organization has evolved over the years as Henricks saw other needs in her community. She opened a food pantry, which now benefits roughly 800 families a month.

While running that pantry, Henricks found that many people had diabetes. So, she started a program tailored to their dietary needs, complete with a weekly nutrition class and free diabetic-friendly groceries.

CNN's Meghan Dunn spoke with Henricks about her work. Below is an edited version of their conversation.

CNN: You've been doing this very emotional work for a long time. What keeps you going?

Ruth Henricks: At first, we delivered to people living with AIDS. At that time, people were actually dying very quickly. It was very traumatic for all of us to watch these people just waste away. We would hardly put them on meal service, and a month later somebody would be calling, saying, "Well, they've passed away." So, after a while, people were asking me, "How can you keep doing this and not get depressed?"

It's bringing that love, that respect, that dignity to them in their last days. At least they don't have to worry about where the next meal's coming from.

CNN: Your whole operation is run by volunteers. How do they make it happen?

Henricks: I have been very fortunate to attract the most loving, caring, hardworking volunteers. We share each other's joys, sorrows. We feel good about what we're doing. And it is a family.

We have one paid staff member that started four years ago, otherwise it's been all-volunteer. I've asked a number of people "How long have you been volunteering?" They'll say, "I've been here 20 years." I have a few volunteers who are still with me from the day we started Special Delivery. And a lot of times I say, "Why do you keep coming back?" And they say, "Well, we really believe in what we've created here."

CNN: What do you see for the future of the organization?

Henricks: I've promised everyone that the diabetic program will be the last program, but I didn't know there was going to be anything beyond the pantry, so we'll see what comes. If we see some type of a food insecurity need in the community, we're going to try and fix it. I can't promise that everyone in San Diego will be able to eat tonight. But we're going to try our best to feed the people in our corner of the world.

Want to get involved? Check out the Special Delivery website and see how to help.