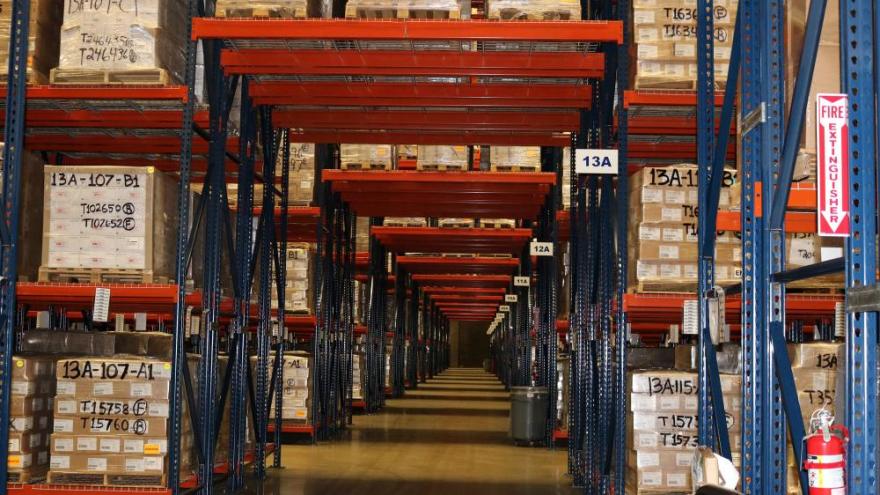 Inside the warehouse containing some of the nation's most critical supplies and vaccines.

(CNN) -- The warehouse is like any other with row upon row of products stacked on top of one another with identifying barcodes.

But it's unique in that it contains critical items to protect the United States in the event of an attack or disaster. And this year, the warehouse became a flashpoint in the Covid-19 pandemic.

The Strategic National Stockpile dates back to 1999, when fears of a bioterrorism attack coinciding with the Y2K computer switch were front and center, and serves as the country's repository of emergency medical countermeasures. But hit with a global pandemic and nationwide demand for supplies, the stockpile, which is maintained by the Department of Health and Human Services, was deemed inadequate.

"The nation agreed: We weren't where we needed to be," said Steven Adams, acting director of the Strategic National Stockpile, adding there are ongoing discussions to better position the stockpile to respond to national need.

Adams said his team has had four briefings with the Biden transition team, adding that so far there has been no disconnect with the incoming administration over long-term plans for the stockpile.

CNN received inside access to one of the federal stockpile warehouses, which are spread out across the country, and agreed not to disclose the location for national security reasons.

Earlier this year, as the pandemic gripped the US, personnel worked around the clock to deploy supplies, with trailer trucks on the standby for speedy distribution, according to David Allen, deputy chief for SNS Operational Logistics Branch.

The stockpile was never intended -- or funded -- to bear enough equipment for a pandemic, but it still became a point of contention between states and the administration, and eventually, prompted HHS to rethink the country's stockpile.

In January, there were 12 million N-95 masks -- which are, and continue to be, in high demand in total. As of December 18, overall, there are 194 million N-95 masks in inventory. There were similar surges with surgical masks, gowns and gloves. For example, there were 4 million gowns/ coveralls in the federal stockpile in January, compared to 173 million currently in inventory.

The administration is also investing half a billion dollars in domestic glove manufacturing, according to Paul Mango, deputy chief of staff for policy at HHS, referring to the steps the administration is taking to bolster the federal supply stockpile.

The replenishing of the Strategic National Stockpile -- and plans to improve it -- comes at a time when there's a significant increase in coronavirus cases across states and as hospitals try to proceed with elected procedures, which had previously been put on hold and similarly require personal protective equipment.

The worsening situation has again raised the question: Can the federal stockpile meet demand if supply shortages arise again? The short answer, according to HHS officials, is yes, citing new visibility into the supply chain and any chokepoints, as well as the flow of products currently coming in. Key to those efforts, officials say, is continuing to ramp up domestic production of supplies.

"We want to hand these on to the next administration and make sure America never has to go through what we went through again," Mango said.

Previously dubbed the National Pharmaceutical Stockpile, the idea behind the stockpile was to establish and maintain a sufficient supply of medicine and medical equipment in strategic locations around the US to be able to quickly help state and local communities in the wake of an attack with agents such as anthrax, smallpox, plague or other pathogens.

That Y2K attack never came. But the stockpile was tapped following another disaster soon thereafter: On September 11, 2001, planes delivering stockpile supplies to New York City were the only flights allowed in American skies other than military aircraft and Air Force One.

In the wake of 9/11, the stockpile was given its current name: Strategic National Stockpile. It was used again in the early 2000s in response to a series of anthrax attacks around the US and ultimately supplied with enough medication to treat up to 12 million people.

In the years since, the SNS has been used in response to a variety of disasters, from outbreaks of Zika, Ebola and botulism to flooding and major hurricanes, including Katrina, Sandy and Maria.

The Covid-19 pandemic put additional strain on the stockpile, since it didn't have the quantity of personal protective equipment and ventilators needed at the moment. To remedy that, HHS has shored up millions of items stored in warehouses nationwide, including the one CNN gained access to.

Experts agree that there's more inventory than had previously been stocked, but questions remain over how much is enough and whether stockpiling is the ultimate solution.

"There's more inventory in more categories than there ever has been in the stockpile," said Chaun Powell, who leads the disaster response team at Premier, a healthcare improvement company. "Stockpiling in general has contributed to the fact that we're in a better position. We still don't think stockpiling is a long term solution."

Instead, experts have floated more sophisticated IT solutions that provide visibility into the supply chain to identify where problems might crop up and which could allow for quicker solutions. Adams and Mango touted the progress the department has made in advancing systems to have more transparency into the supply chain.

"They need to get a situational understanding of what's in it, what's on backorder, who they're contracting with," said Dr. Georges Benjamin, executive director of the American Public Health Association. "They need to get a bird's eye view of the whole national situation -- federal, state, local."

President Donald Trump repeatedly said it was incumbent on states, not the federal government, to meet local supply needs, but over time, the administration has worked toward bettering the stockpile to avoid shortages like those seen earlier this year. But Trump's comments also prompted states to build up their own supply stockpiles.

Steven Batson, South Carolina Emergency Management Division's chief of staff, told CNN the state has a 30-day stockpile for the first time -- an effort that started over the summer.

Batson said the state is "happy with the federal planning effort," adding, "Nothing like experiential learning to figure out what works and what doesn't."

Similarly, California has worked with private sector vendors to set up a supply stockpile "so that healthcare and essential workers in California do not face the same supply shortages and exorbitant pricing that has characterized the early days of the pandemic," according to Brian Ferguson, the deputy director for crisis communication and public affairs for Gov. Gavin Newsom's office.

If local capacity is exceeded, then states can rely on the federal supply stockpile. And this time, officials say, they're better prepared to respond to pandemic-related demands.

CORRECTION: An earlier version of this story incorrectly described the size of the warehouse. It is a nearly 300,000-square-foot facility.