Inside the magical world of Disney super runners 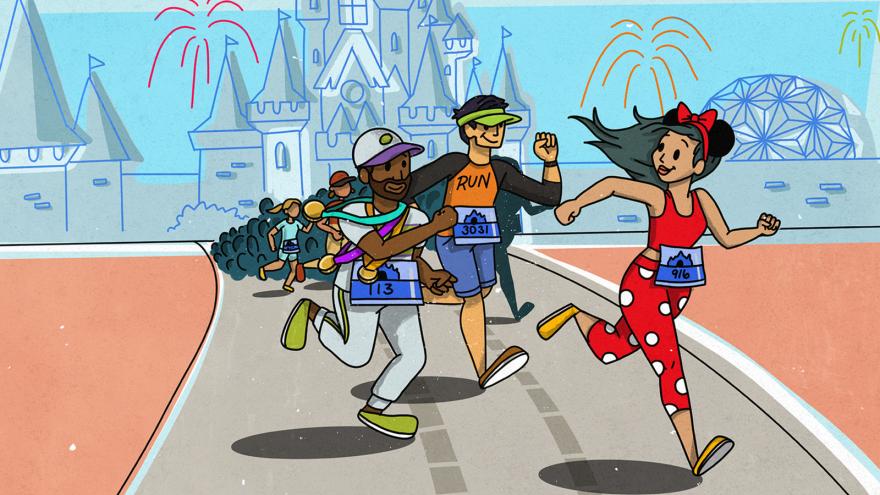 (CNN) -- The sun won't rise for hours in Celebration, Florida, but the party is already in full swing. Is it too early for bone-rattling cardio beats or a "We Don't Talk About Bruno" singalong? Objectively, yes. But the tens of thousands of runners huddled in the parking lot of Disney's Epcot Park have been awake for hours, fluffing their tutus and stretching their hamstrings in preparation for the 13.1-mile journey ahead. The Disney Princess Half Marathon isn't just a race, after all. It's an event, and it's one of dozens of races organized by runDisney every year, attracting racers and Disney enthusiasts from all over the globe.

Disney and running: It's a powerful combination of obsessions. Among the sparkly throngs packed into the Princess Half Marathon starting corrals are runners who have been pounding the pavement at Disney parks for years, even decades, racking up rows of medals and forging a life-changing passion.

There's a whole Disney lingo for these enthusiasts: Goofys. Dopeys. Princesses. Let's call them the Disney "super runners." And when it comes to your typical race crowd, they may be the happiest people you'll ever meet.

As the clock ticks down to the start of the 2022 Princess Half Marathon, a ripple of excitement goes through the crowd -- or maybe it's anxiety. When the starting fireworks go off, the morning will fly by in a blur of color and music and sweat. There are castles to run through, in between several very unmagical highway off-ramps. There are Disney characters to visit, personal bests to chase and finisher medals big enough to eat a meal off of. This is the intoxicating feeling that keeps Disney super runners coming back time after time.

RunDisney races attract about 163,000 participants annually to Disney properties. Each "race" is really a themed weekend of races, ranging from untimed, family-friendly 5Ks to serious 26.2-mile marathons. The tradition began with a single Walt Disney World Marathon in 1994 and ballooned to a whole network of races and challenges across the world.

Vicki Sue Merry has done them all. Well, close enough. At 64 years old, the retired Navy veteran from Cantonment, Florida has run a total of 153 Disney races since 1999. She knows the exact number because she tracks them in an Excel spreadsheet and records them on a special shirt. On it, there are icons from every single event; some for the Castaway Cay 5K on Disney's private island in the Bahamas, and more for triathlon events and West Coast races in Disneyland that have since been discontinued.

When asked about the most unique Disney race she's completed, Merry doesn't disappoint.

"They used to have an inline skating half marathon in Disney World, and I got to do it on my 50th birthday."

Like many serious Disney runners, Merry also runs other races -- 663 and counting, to be exact.

But Disney races are special.

"No matter how big they've gotten over the years, and the races have grown and grown, I still feel like Disney cares about individual runners," she says.

The most popular runDisney race series have a "challenge" aspect that runners like Merry find a bit addictive: You run a few back-to-back races over a weekend, or complete certain races together, and you get special medals and extremely niche bragging rights.

Merry, for instance, is a Perfect Dopey. Those words mean nothing to the general public, but in front of the right audience, they earn gasps of delight. To complete the Dopey Challenge, you have to run all four races during the Walt Disney World Marathon Weekend in January. That's a 5K, a 10K, a half marathon and a marathon over four days -- 48.6 miles in total. Merry has done it eight years in a row.

For Mike Flaherty, this year's Princess Half Marathon marks his 99th Disney race. The event holds a special place in his heart: It was here, in 2014, that his love affair with Disney running began.

"I hadn't run in ages, and I was getting lazy as I got older," he says. His wife was preparing to run her second Princess Half Marathon, and convinced him to try out the 5K the same weekend.

It was love at first mile.

"I thought it was the coolest thing I'd done as an adult. There was so much energy and positivity from the crowd, so many great stories of people transitioning from not exercising to setting goals for themselves," he says. "As soon as I got home, I wanted to sign up for more."

Within a year, Flaherty went from barely exercising to completing his first half marathon. Then he added the Tower of Terror 10-miler, the inaugural half marathon in Disneyland Paris and the fabled 48.6-mile Dopey Challenge, which he calls the "Super Bowl of runDisney."

For Flaherty, it isn't just the fun medals and the potent Disney atmosphere that gets him excited about his next race. It's the sense of personal accomplishment, of showing up year after year and completing what once felt like an impossible -- nay, Dopey -- feat.

Take one of his most memorable race weekends: In 2017, the half marathon portion of the Walt Disney World Marathon Weekend had to be canceled due to bad weather. For those running the four-race Dopey Challenge, that presented a conundrum. On one hand, they all got credit for doing the half marathon without running a single step.

But would it be a real Dopey without it?

"I knew it wouldn't feel like a real one if I didn't run it," Flaherty says.

And so, he laced up his running shoes and headed out into the driving rain to complete the half marathon on his own. Except, he was far from alone. Hundreds of other Dopey hopefuls showed up with the same idea, flooding the planks of Disney's Boardwalk and running circuits around the Disney resort properties as onlookers handed out bottles of water and cheered.

"Runners are a community wherever we are, and we tend to help each other and support each other," Flaherty says. "Then when you throw all of that onto one of the largest vacation properties on the United States and you add in an atmosphere of running, camaraderie and fun, it's a winning formula."

The climax of the Disney Princess Half Marathon comes alarmingly early in the race. Around miles four and five, racers file into the Magic Kingdom, running down the park's Main Street to cheers of onlookers before taking a loop past beloved rides and finally through the fabled Cinderella's Castle. It's a huge highlight for any Disney fan, and the promise of this experience -- whether it's a jog through a castle or a leisurely loop through another park, pristine and empty in the morning hours -- is what draws a lot of first-time runners.

What keeps them is the heady feeling of accomplishment, no doubt piqued by all of the emotional beats Disney knows to hit. On these runs, large speakers blasting swells of Disney anthems and hundreds of cheering cast members and characters are your constant companions. Out of context, it's a sensory overload. But as one mile turns into 10 and the sweat starts to burn your eyes, you'll take any encouragement you can get.

In the moment, it's not hard to see how one race experience becomes two, and two become dozens. Friendships are made, unbreakable running streaks are forged. Before you know it, the races just become a way of life -- one that keeps going even after the finish line is crossed.

RunDisney groups abound on Facebook. Some have tens of thousands of members, while others are much smaller. In addition to the flurry of activity around race weekends, people in smaller groups post about non-Disney race accomplishments year-round while trading training tips and inside jokes about Disney experiences. Some groups hold meetups and parties on race weekends. While there are plenty of fun races and plenty of supportive running groups in the world, the Disney race experience seems to be one where the fun truly does increase with numbers.

That's one part that David Dysart, 51, finds particularly enjoyable. In addition to the "Disney" of it all, he loves the supportive environment, where everyone is encouraged to achieve regardless of their abilities or running experience.

"You see grandmas and people with physical differences; people of all ages and shapes and backgrounds," he says. "And you can see that at other races, too. But it seems like, at Disney, there's just more of that."

It bears repeating that runDisney enthusiasts exist at a very potent intersection of interests. "Disney adults" get a bad rap, as do many distance running communities. The word "obsessive" comes up often. But the community of Disney super runners seems to break that stereotype, proving it's possible to be well-adjusted, have a loving family, a fully-realized vocation (the Disney runners CNN talked to were veterans, insurance adjustors, computer science professionals, moms and more), and just happen to be very into Disney races.

Still, people like Dysart are quick to point out it takes hundreds, if not thousands of dollars a year to keep up a Disney running habit -- not to mention the training and travel.

If you want to show you're really into Disney races, a runDisney tattoo is the way to go. It's another neat intersection of the Disney community and the running community, both of which are known for their abundance of ink. Put them together, and you get art.

Cyndi Borelli of Reading, Pennsylvania got her Mickey tattoo to represent each length of race she's run. The reason? Simple pride.She's an annual passholder at Disney and has completed five Disney races, but plans on doing more -- and adding a marathon portion to her tattoo someday.

Michele Silverman of York, Pennsylvania has run about 20 Disney races, including a few in Disneyland Paris. She's the kind of Disney runner who's unapologetic about her motives: "I hate to run," she says. (She's likely underselling herself, as she's also completed obstacle courses, 5Ks and other longer races.) "But I like the process. I like signing up, training, getting shiny, blingy medals for all the hard work. I like doing the impossible."

Her (multiple!) Disney race tattoos, like her gem-eyed Dopey piece, are a way to capture that magic forever.

For Ruth Kohl of Elkridge, Maryland, her Dopey Disney tattoo and runDisney experiences are bittersweet. To celebrate her 50th birthday in 2017, she signed up for the full slate of Disney Princess Races. The day before the half marathon, her husband unexpectedly passed away at home.

"I swore I would never go back to Disney again until a coworker of his told me how proud my husband was of me and all my running," she says. "The Dopey was the last race I talked with John about. He had every confidence that I could do it."

To ask why Disney super runners spend so much time and money and sweat and tears on their hobby is to ask why anyone does anything at all. Why do people run? Why do people prioritize things that make them happy?

As the pink sun lights up a soft, warm Florida morning, the Disney Princess Half Marathon runners beat ever closer to the finish line, where cheering crowds and shiny medals await. But there are other things to be won, too: Personal achievement. Connection. Simple enjoyment. And the proof that, no matter how much life tries to steer them off course, they're still standing at the end.