Inside the eye of a hurricane from above 1,000 feet 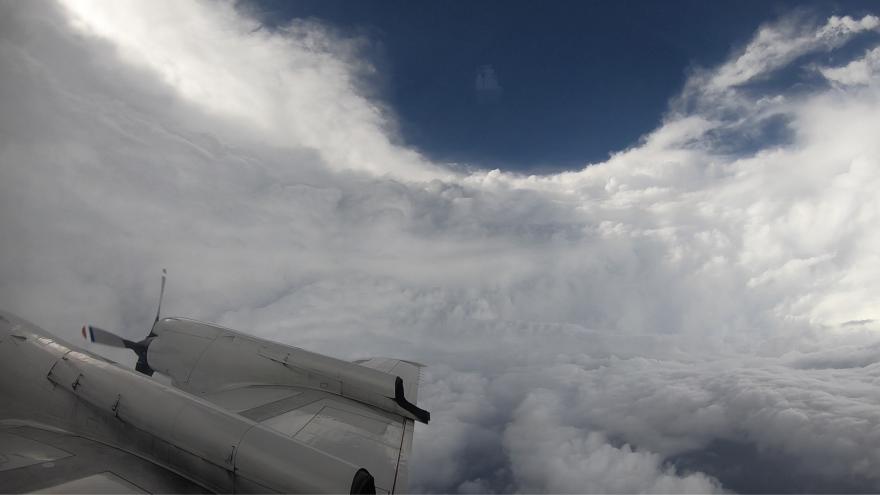 Editor's note: CNN weather is launching a weekly column, publishing Mondays with the weather news you should be aware of and the week's hurricane outlook. Find updates each week here.

(CNN) -- One week ago hurricane hunter Nick Underwood was sitting in the back of a Gulfstream 4 aircraft named Gonzo flying around Tropical Storm Elsa as it churned through the Caribbean.

"Sonde away," responded Underwood, as he released a dropsonde data collection device from the aircraft.

After 20-30 seconds he knew the release was a success, as data about the storm poured back to his computer.

Temperature, pressure, humidity, wind speed and wind direction data started coming in from the dropsonde. Then, seconds later, the instrument splashed into the ocean.

It's this information that is sent to the National Hurricane Center, which then informs the rest of the world that Elsa is still a tropical storm, on a forward path to impact the United States.

It was Underwood's first mission of the 2021 hurricane season, but he is not a rookie. As one of the National Oceanic and Atmospheric Administration's hurricane hunters, he has a front row seat to some of the world's most ferocious storms.

"Flying through a hurricane is kind of like being on a wooden roller-coaster in an automatic car wash," said Underwood.

"There's a lot of vibrating, a lot of getting tossed around from left to right, but there's also wind and rain and graupel and whatever else slapping into the windows as you are flying into the rainbands and through the eye wall as you are making your way through," he said.

Being a hurricane hunter isn't for the fainthearted. They run eight-hour missions in and around the storm and will continue to do that daily for six-day stretches until the threat is over.

"I've been through some of the bigger storms over the last couple of years. it's always exciting and something I enjoy doing and something that's important to so many people, so I take it as seriously as I can," said Underwood.

He flew through Hurricane Irma in 2017. It was his first flight as a crew member, which just so happened to be through a Category 5 hurricane.

"We deployed to Barbados and flew a couple of missions while Irma was still forming deep out over the Atlantic," said Underwood.

"Then Irma made its way up to a Category 5 storm and here's me -- I've been on the job over a year but this was my first major storm as a formal crew member. There were some nerves, but I made it through just fine," he said.

Underwood said being in the eye of the storm during Hurricane Matthew in 2016 is what really got him hooked.

"It was my first flight into a hurricane and I was an observer. I wasn't 100% prepared for what I was about to go through," he said.

"The first two hours I was fine and the subsequent six I got very sick and wasn't having the best time but I remember once the sun came up and we were still making passes into the eye of the storm and I remember looking up out of the window from being sick and thinking, wow! This is incredible."

"Once you are in the eye, that's where the real hunting begins," said Underwood.

"We are maneuvering around to find where our flight level winds get down to zero. because that's where the true center of pressure is."

As the crew makes their way out of the eye, they hit the eye wall, which is the strongest part of the storm.

"It's called a wall for a reason. You go from having a nice, sunny day right back to some of the worst weather you can find yourself in," he said.

Surprisingly, he said, it's some of the smaller storms that toss you around more than the bigger ones. The aircraft are staffed with 12-15 people on board. All have special roles and make the process work seamlessly.

"The flight director is constantly looking at the radars we have on board and trying to pick out the best parts of the hurricane for us to go through. The parts that aren't going to absolutely rock us," he said.

Underwood has also flown around Hurricanes Dorian, Harvey and even Maria, shortly before it made landfall in Puerto Rico. It was a poignant moment for him as he was in the aircraft looking at the data, and realizing then and there that this storm was going to make a direct hit.

"I remember with Maria this very heavy weight because you are looking at the data and hoping it makes a turn somewhere and we're realizing that it just wasn't going to happen and then of course Puerto Rico got devastated."

"Every storm is different and you certainly respect them as such," he said. "All we can do is gather the information and use that to better forewarn people of what's headed their way."

Underwood doesn't take his job lightly. He knows that the better he and the crew do in the storm, the more accurate the forecast will be and the better warning people will receive of what's to come.

As Tropical Storm Elsa made its way through the Caribbean Sea, NASA astronaut Megan McArthur shared this image taken from her vantage point aboard the International Space Station.

She wrote, "Tropical Storm Elsa from the @Space_Station today. Stay safe everyone."

Elsa made landfall on Wednesday, July 7, along the big bend of Florida.

Parts of New York City and New Jersey were at a standstill Thursday afternoon as 2 to 4 inches of rain fell in a short time and flooded streets, subway stations and entire neighborhoods.

This came just before Tropical Storm Elsa moved through the area and brought even more rain.

The same area is once again under a flash flood threat for Monday afternoon and Tuesday morning as more showers and strong storms push through the Northeast.

Cities like New York and Boston could see 1 to 4 inches of rain.

See if your area could be impacted by the storms

The tropics should remain very quiet this week. No tropical activity is expected for the next five days, according to the National Hurricane Center.

"There are a couple of areas like the Gulf of Mexico, and around the Caribbean islands that are favorable for development, but most areas are seeing high wind shear or dry air," said CNN Meteorologist Dave Hennen.

"None of our reliable computer models are showing development this week."

This dry air will keep chances low for development. Of course, forecasts can always change, so make sure to stay updated throughout the week.

Hurricane season typically peaks around September 10 and runs through November 30.

That's the temperature in degrees Fahrenheit that Death Valley reached on Friday. Even in such a hot place, that number has been reached only on four other occasions -- August 16, 2020, and July 10, 12 and 13, 1913.

Extreme heat continues in the west

Sunday was another record-breaking day for many across the West, as the heat wave set dozens of records once again. And more records could be broken Monday.

"The only other longest streak was six days back in July of 1913. Death Valley has the chance of extending the current streak to four consecutive days on Monday," said CNN Meteorologist Haley Brink.

While the heat moving forward won't be as extreme as we've seen over the weekend, temperatures will still run 10 degrees above average for places like the interior Pacific Northwest and the Great Basin. Overnight lows have also been extremely warm during this long duration heat wave, according to the Weather Prediction Center.

Lows in portions of the Desert Southwest have failed to fall below 90 degrees, making it harder for the human body to overcome the effects of heat stress.

The West is caught in a vicious climate change feedback loop

"Some localized relief from the extreme heat may arrive in the form of monsoonal showers and storms each day across portions of Arizona and New Mexico," said the prediction center.