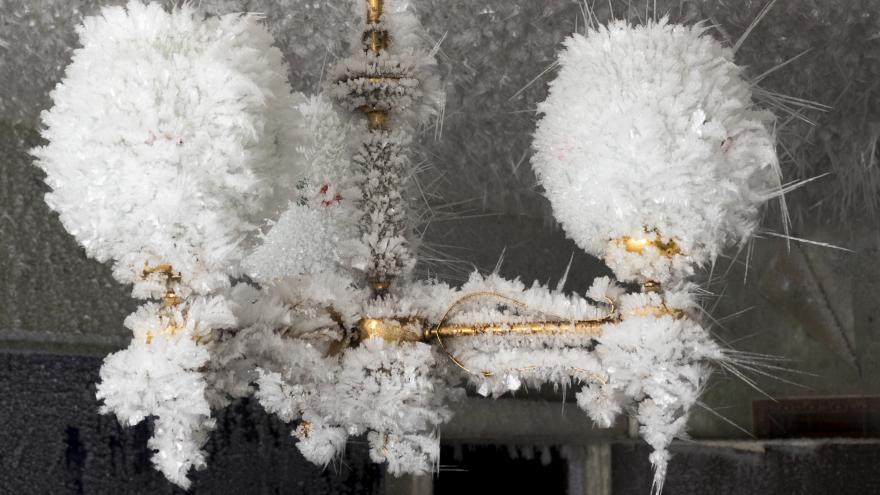 (CNN) -- Photographed from above, acres of snow engulf buildings as far as the eye can see.

Up close, the surreal details shine through; light fixtures adorned with intricate icicles, couches enveloped in snowdrift and sheets of ice spilling in from open doors, frozen in time.

These are the abandoned ghost towns towns that surround the coal-mining center of Vorkuta in Russia's Arctic north, swathed in snow and ice following recent brutally cold temperatures.

Moscow-based photographer Maria Passer traveled to the area to capture how the extreme weather has impacted abandoned buildings.

The town of Vorkuta was an infamous Gulag labor camp from the 1930s to 1960s, with prisoners forced to mine the region for coal.

In the later years of the Soviet Union, people moved from across the USSR to the area for mining jobs. 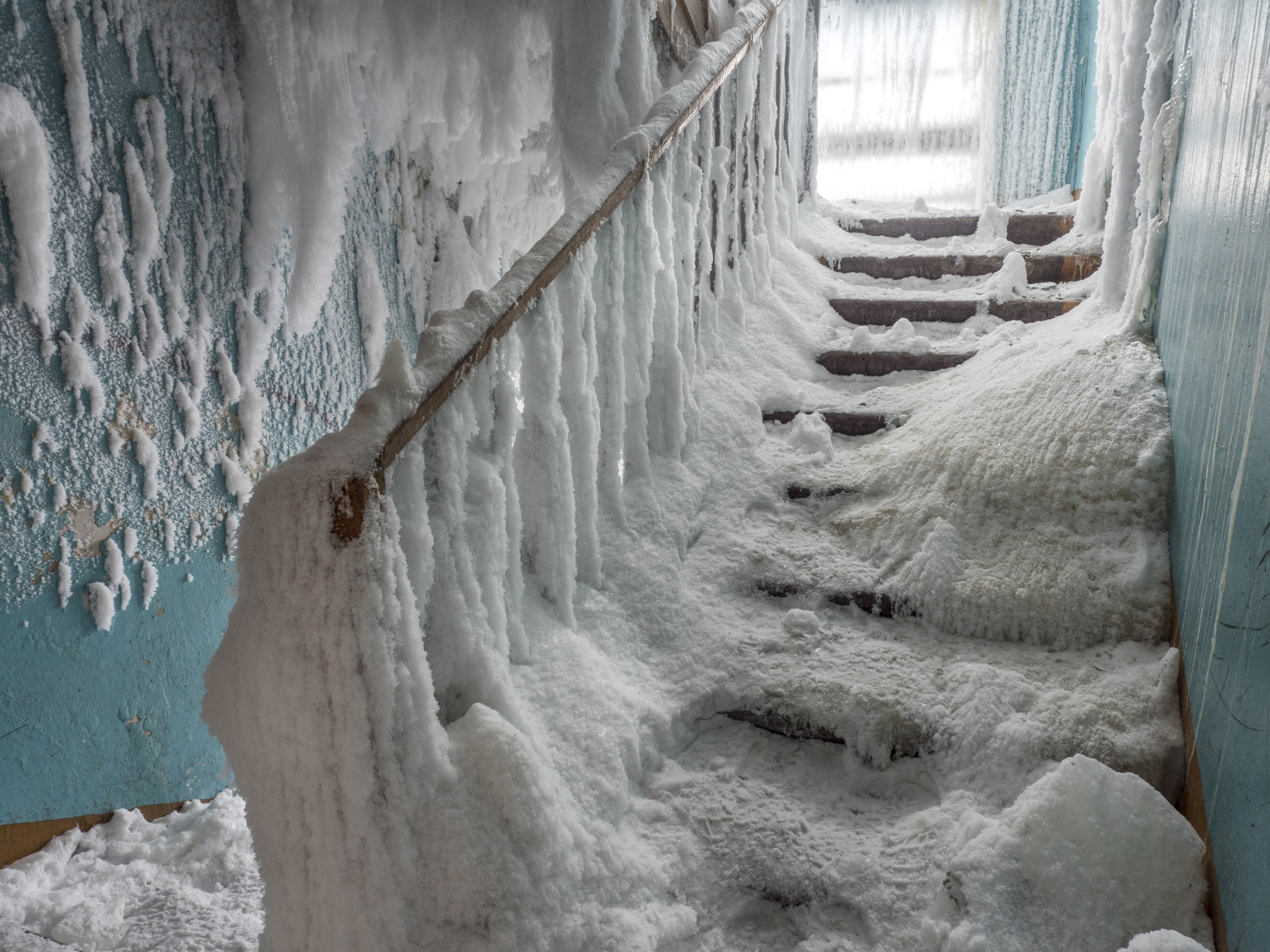 After the Soviet Union collapsed and coal mines started to close, the towns' fortunes changed again. Faced with no job opportunities, many left the isolated region.

This migration has led to an abundance of abandoned structures in the villages around Vorkuta, which Passer has been photographing for the past three weeks.

"It's really a tragedy that many people have to leave their houses and to go to live somewhere else," she says.

"But these locations, they have an abandoned beauty. I'm trying to see this, and to show this, in my pictures."

Passer is a photographer who hunts out abandoned places on her travels.

"I like to explore the world and take pictures of all the things which seemed beautiful to me," she says. "I'm deep into urbex -- urban exploration."

Passer was aware of Vorkuta and its history, but she was inspired to travel from Moscow to the area after seeing recent images taken by her photographer friend Lana Sator.

Within a week or so, Passer had arrived in Vorkuta and the two friends were exploring together.

Some of the buildings she captured on camera were completely deserted, others semi-abandoned.

For Passer, her most striking shots were taken in the village of Severny, inside a green-hued building coated in snow.

Passer says some people still live in this apartment block, so the water is still on. 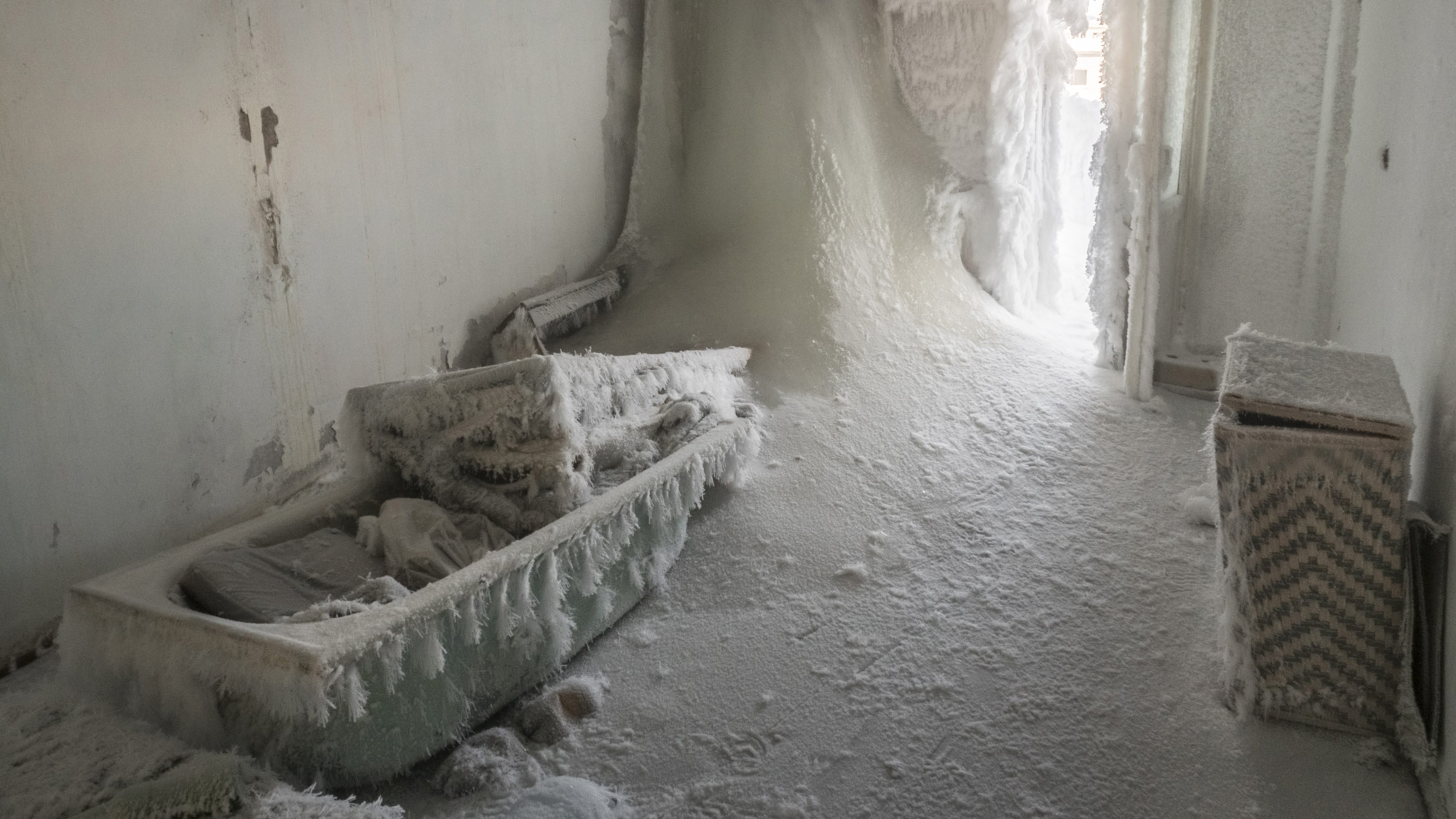 But in some of the complex's abandoned apartments, pipes broke, water poured into the rooms and icy temperatures prompted the liquid to immediately freeze into swathes of ice.

Some of the entrances were completely blocked by these cascades of frozen snow.

"I have never seen something like that anywhere," says Passer.

It was -38 F (-38 C) while Passer was wandering these villages. Taking photographs in such cold conditions has its challenges. Passer says her battery was more prone to dying, so she had to hold her camera under her coat to keep it warm.

"Your hands get cold. You can't move your fingers properly. You have to wear gloves."

Alongside the photos taken at close range -- such as a particularly remarkable shot of a frozen chandelier -- Passer also took pictures with her drone to get a bird's-eye perspective.

Some of the aerial shots were taken in the village of Cementozavodsky, which Passer describes as almost completely empty.

"In this village there is only one apartment building which is not abandoned," she says. "There are no shops, banks, literally nothing."

Passer spoke to some of the people living in the area about what it's like. 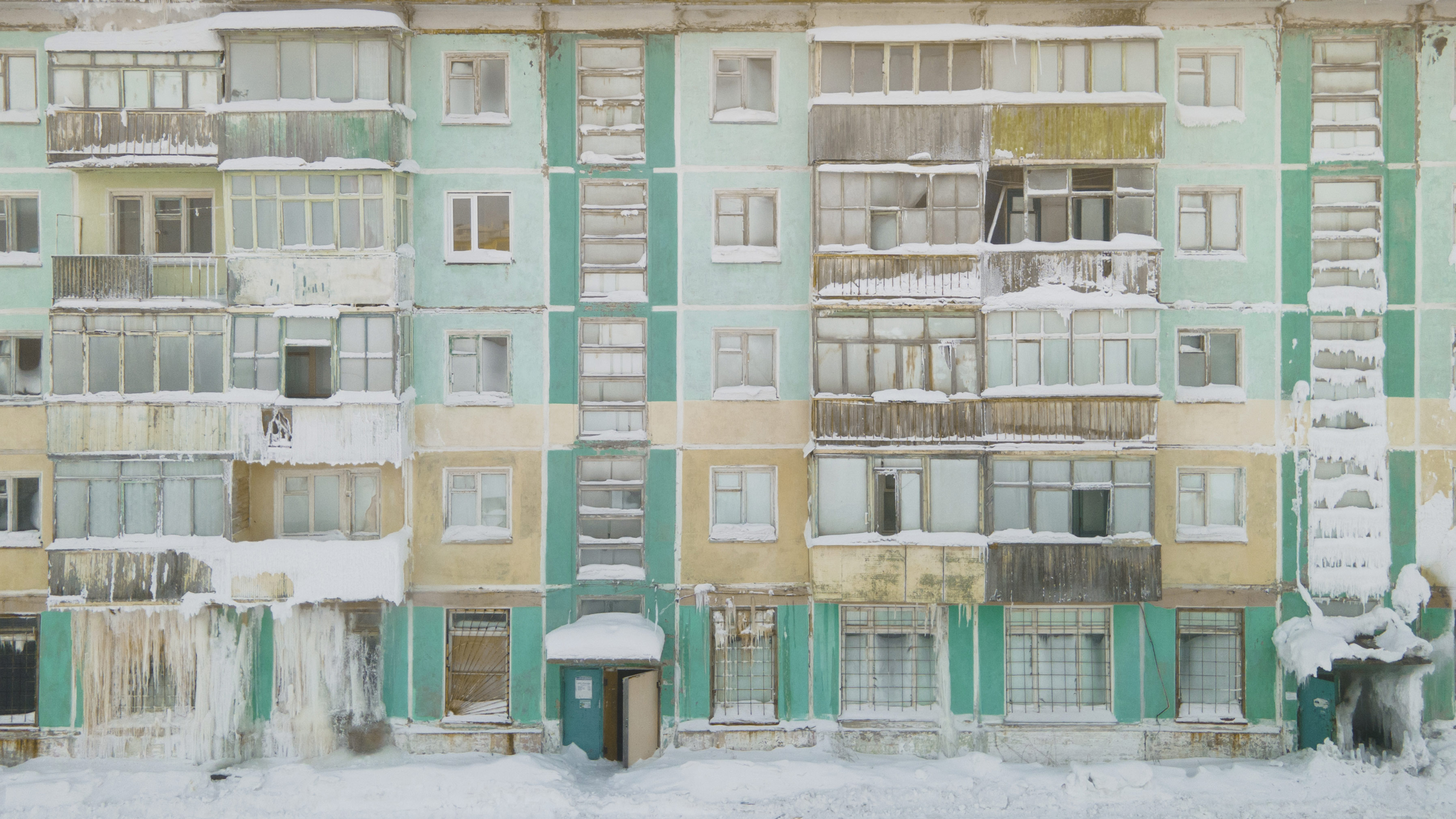 "It feels like they are upset that the place where they were born, where they grew up, is dying," she says.

"People who want to move from the region can't sell their apartments and have to leave them."

Some residents hope the Russian government will help them relocate, says Passer, but they tend to be offered homes in Vorkuta, rather than elsewhere in Russia.

She spoke to some people living in the apartment block in Severny that is partly abandoned.

"There is just one family and they are going to be relocated to another apartment in another building soon," she says. The inhabitants told Passer that the broken pipes that brought the ice inside aren't going to be fixed anytime soon, because the block will soon be completely deserted.

Passer's photographs have spread across the world over the past few days, their stark beauty capturing viewer's imaginations, and shining a light on life in this Arctic corner.

Passer wants viewers to consider the context of the pictures as well as their beauty.

"When I explored this iced building, I had two thoughts: 'Oh my gosh! It's disastrous' and 'Oh my gosh, it's breathtaking!'" says Passer.

"I would like people who see the pictures to feel the same way. " 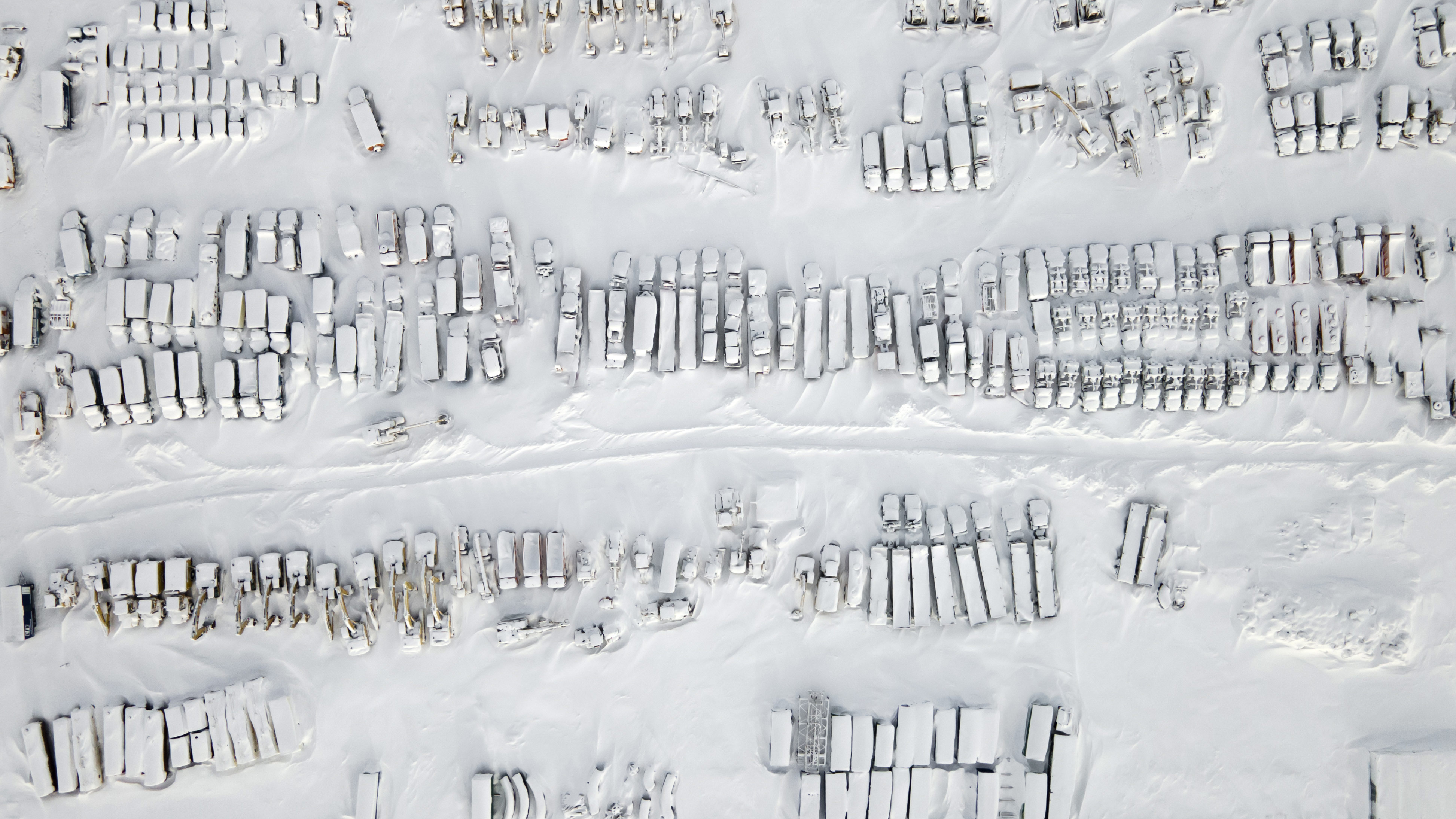